Why Just Collect is the best place to sell your PSA graded cards!

We are always looking to purchase more and more inventory. We buy cards and collections from the public, we buy at trade shows and at major conventions, we buy via the Internet, we buy from eBay, we buy from dealers and we even buy from auction houses. Recently, we purchased a complete 1948 Bowman Football Set from a major auction house with each of the 108 cards being professionally graded by PSA.

Over the more than a decade that Just Collect has been in business, we've purchased many complete 1948 Bowman Football Sets. We've also purchased partial sets, lots and individual cards, so this collection isn't exactly something that is new to us. However, we thought it was important to share this recent purchase for several reasons.

The primary reason is that we purchased this from a major auction house. That means that the set was consigned by someone to the auction house for the auction house to market and sell. Even if the auction house didn't charge them a seller's commission (usually 5-15%), the set was still subject to the 20% buyer's premium that we paid as part of the final price. What does this mean? It means that the person that consigned the set got at least 20% LESS than had they contacted Just Collect directly to sell the set. We see this very often and while we understand why we also don't understand why.  We understand that most buyers don't offer very much when presented with a collection or a complete set, but Just Collect does! While we can't pay more than the market value, we can certainly pay far more than any of our competitors and the best thing is that our offer is NOW and it is CASH and it isn't subject to waiting or to commissions.  Contact us today for a free appraisal if you have a set or collection that you want top dollar for!

Why can we pay more? It is no secret that graded sets often have more value broken up and sold individually, but it isn't that easy for most auction houses or many sellers to do, so they offer them up as complete sets. However, since Just Collect has a model that allows us to consistently break graded sets and sell the cards individually, it also affords us the opportunity to value and offer to pay more than anyone else in the industry.  A set that may sell for $5000 as a complete set (which nets the seller offering it through an auction house a max of $4000 after the 20% buyer's premium is subtracted), may be worth upwards of $5500-6000 broken up.  Just Collect will value the set and pay based upon the break-up value and typically would be able to offer the seller $4400-4800 for the same set.  That's an extra 10-20% MORE for the seller than by offering it through an auction house and getting paid on the "market value."  But then again, maybe some people just don't want or need the extra money...

Now, back to the 1948 Bowman Football Set. Unlike their baseball counterparts, trading cards of professional football players were issued sporadically over the first several decades of the NFL's existence. In fact, early nationally distributed sets contained just a smattering of cards depicting football players. The 1935 Chicle set is generally considered to be the first major football trading card set featuring professional NFL players. However, after the Chicle issue, there would be another drought of football cards for more than a decade until the Bowman Gum Company produced their first football set in 1948. Upon the release of the nationally distributed Bowman (and Leaf) football cards in 1948, children and collectors would be able to look forward to purchasing football cards each autumn as there hasn't been a year since 1948 in which a set of professional football cards haven't been released.

While not as flashy as the 1935 Chicle issue that featured a colorful, Art Deco style, or as bold as the 1948 Leaf issue that boasted red, yellow and blue colors printed over black and white images, the 1948 Bowman Football set had a greater player selection and featured real photographs on card fronts surrounded by a simple colorless border. Card backs featured the player's name, position, team and biographical information in black print, with the card number and various mail-in premium offers printed in red. The cards measured 2-1/16" x 2-1/2" inches. The set included key rookie cards of ten Hall of Fame players including Steve Van Buren (card #7), Sammy Baugh (card #22), Bulldog Turner (card #36) Pete Pihos (card #63) and Sid Luckman (card #107). Bowman was also able to include several rookie cards of players that didn't appear in the competing 1948 Leaf Football set. 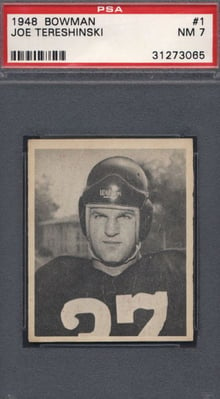 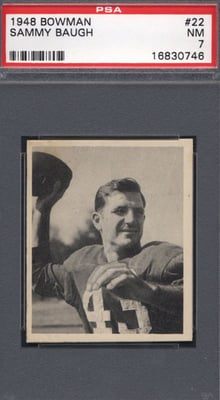 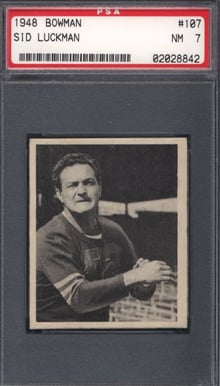 There are a total 108 cards in the 1948 Bowman Football set and they were printed on three different 36-card sheets. The first sheet contained cards #1, 4, 7, 10 . . . while the second sheet contained cards #2, 5, 8, 11 . . . The third sheet contained all of the cards with numbers divisible by three (cards #3, 6, 9, 12 . . .). All of these cards are considered short prints, making a full third of the set more difficult to obtain than the rest. The PSA Population Report bears this out as the third-series cards have generally been graded in smaller quantities than the others.  Check out the 1948 Bowman Football cards from this set that are currently listed for auction on eBay.

The cards are believed to have been distributed in penny and nickel packs with a slab of gum.  There are no known error cards in the 1948 Bowman Football set and an album was printed to house the cards which was offered as a premium in exchange for card wrappers.

Just Collect, Inc. is always looking to purchase 1948 Bowman Football and other vintage football and sports cards (pre-1970). Our staff of well informed, customer service representatives are ready, willing and able to help you with any questions that you may have. Additionally, Just Collect's experienced vintage card specialists can answer most of your detailed or specific questions. Call us today 732-828-2261 or contact us through the website.