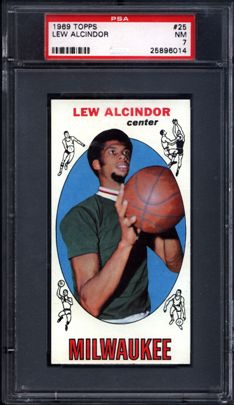 They're Not Tall Just Because They're Basketball Players

"Tall Boys!'  A moniker typically associated with the oversized 1964 Topps Hockey, 1965 Topps Football and the 1969 and 1970 Topps Basketball issues that were significantly taller than the standard 2 1/2" by 3 1/2" cards, measuring an expanded 2 1/2" by 4 11/16".  While athletes in all sports stand tall, it is the basketball players that are literally head and shoulders above the rest of us.  If there was ever an issue that was destined to be used for basketball, it was the taller Topps cards.

We've had plenty of 1969 Topps Basketball cards at Just Collect, including quite a few purchased as part of the New England hoard several years back, and many others found in collections like the one that a collector dropped off at our office for us to evaluate when we had the time.  We've recently updated our basketball buying page to help you contact us more easily if you have a collection that you may want to sell.

Lew Alcindor, the key rookie card in the 1969-70 Topps Basketball Set, was a star center out of Power Memorial High School in New York City and a member of John Wooden's incredible UCLA NCAA Championship teams. He was the number one pick of the Milwaukee Bucks and would team with Oscar Robertson to lead the Bucks to prominence and an NBA Championship before being traded to Los Angeles joining the Lakers and leading them to multiple NBA Championships.  While most people are familiar with Alcindor, they may not recall his name in many NBA record books because, having already converted to Islam while at UCLA, Alcindor adopted his Muslim name Kareem Abdul-Jabbar, in 1971.

Not Just a Tall Order

The 1969-70 isn't just a set focusing on Alcindor.  Since there had not been a mainstream basketball release since the 1961 Fleer Basketball issue, the 1969-70 Topps Set was chock full of rookie cards and Hall of Famers.  Featuring stars that had already appears on cardboard like Wilt Chamberlain, Jerry West and Oscar Robertson, future Hall of Fame players like Dave Bing, Bill Bradley, Billy Cunningham, Dave DeBusschere, Walt Frazier, John Havlicek, Connie Hawkins, Elvin Hayes, Jerry Lucas, Earl Monroe, Willis Reed, Nate Thurmond and Wes Unseld also made their initial rookie appearances in the 1969-70 Set.

We've run into a wide range of people and collections over the past decade. Although we are known for https://www.justcollect.com/basketball/, we are also extremely interested in buying non-sports cards, too!