Do You Buy Non-Sport Cards?

A local gentleman called our office asking if we buy non-sport cards, stating that he had a collection of some older non-sport cards that he had collected in the late 1950's and early 1960's as well as a few football cards that he had been given many years ago.  He wasn't sure if they had much value, but wanted to come by and have us take a look and he hoped that we would be interested in purchasing them.  We scheduled an appointment and met with the gentleman to review his collection and when he came in and we examined the collection, what we found inconspicuously contained in the collection hiding in two cigar boxes was quite surprising, but more about that in a few minutes.

We met with the man and began to assess the collection.  It was a relatively basic non-sport collection that was pretty straight forward and the standard fare that you find from most collections of the era.  While taking notes, it appeared that most of the cards were from 1956 to 1963 and included an assortment of Flags of the World, Zorro, Isolation Booth, 3 Stooges, Dinosaur, Civil War News and a myriad of other cards from the timeframe.  Additionally, there was a smatter of football card from 1960 and 1961.  While this basic assortment had some value, it wasn't anything out of the ordinary.  But then . . .

One of These Things is Not Like the Others

There were two cigar boxes with a few hundred cards tightly, but neatly arranged in several rows in each box.  We've had some great "cigar box" finds previously, and the contents of these two tobacco containers were no different. There were hundreds of cards in each of the two boxes and at first glance, they appeared to be Topps Freedom's War cards.  After reviewing the first box, the full group was really sharp, almost vending condition 1950 Topps Freedom's War cards.  A very nice group which included many NM and NM/MT cards, but it was the second box that made this collection special.

The 1950 Bowman collection included a partial set and plenty of duplication.  Many of the stars and the Hall of Fame rookie cards were also included in the collection.  There were Hall of Fame rookie cards of Joe Perry, Lou Groza, Otto Graham, Y.A. Tittle, Elroy Hirsch, Marion Motley, Jim Finks and Tony Canadeo as well other Hall of Famers like Doak Walker, Sammy Baugh, Sid Luckman, George Connor, Bulldog Turner, Leo Nomellini, Pete Pihos, Steve Van Buren, Chuck Bednarik and others.  There was some duplication of several of the stars and rookies, but nothing compared to more than a dozen Bob Waterfield cards in varying conditions. 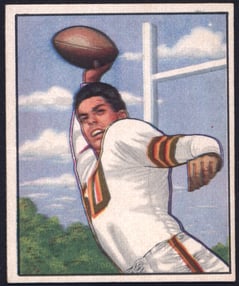 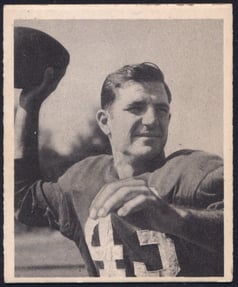 We've sent a few of these cards in for grading and are offering them on eBay for bidding ending June 18, 2017 with more to following in the coming weeks.

So, What Do you Think?

After we finish an in-house evaluation and have our final numbers and have prepared our purchase offer, we like to ask the seller what price they were hoping to get for their collection.  Sometimes, they have unrealistic expectations and sometimes they have such low expectations that they are ecstatic at the offer.  Most times, they've done enough research that we're in the same ballpark.  When we asked this gentleman what he was hoping for, he joking replied, "As much as I can get."  When we presented the details, explained the value of the cigar box cards and that the football cards had the most value, he was quite surprised and was even more astounded by our offer that he happily accepted.  We talked a bit more and he shared that the two cigar boxes were given to him many years ago by a family friend that had collected them and he had never given them much thought.

We're glad that he thought enough to add them to his collection and bring them to our Somerset, NJ office for a free appraisal.  When we presented him with the payment for the collection, he was happy he brought them, too!  He was more than pleased with our offer and like many other sellers, had great things to say about our process.  You can read a few of what our customers have had to say about us on our Google Reviews.