We love buying deals.  We love when customers come back and sell us more portions of their collecitons.  We love it even more when we get a third helping of a very large collection. It means that we're doing something right and that our customers are happy with our service, our evaluations and the prices that we pay!

We've been working with a gentleman in the Midwest that has been selling off portions of a collection that he built with his grandfather and it has featured nearly a complete run of football sets from 1948 to present as well as a wide array of inserts, oddballs, Police Sets, Team Issues and even a run of matchbooks.  We'll be sharing portions of this collection in the coming blogs, but today, we'll feature the full run of Philadelphia Football Sets.

We've already shared with you the 1948 and 1949 Leaf Football Sets, but there is also a run of Topps Football Sets, Fleer Football Sets and so much more.  Even a run of baseball from 1952 Topps through 1980 with many complete sets.

A Run of Philly Football Sets

The Philadelphia Football Sets were ssued from 1964 through 1967 by Philadelphia Chewing Gum Corporation (makers of "Swell" brand gum and Gold Rocks Nugget Bubble Gum) after they contracted with the National Football League to produce football cards depicting NFL players in direct competition with Topps, which retained a contract with the American Football League (AFL).  Each year has some some great player selection, but unfortuantely, after Topps secured the AFL contract that Fleer had held since 1960, Philadelphia missed out on being able to produce a Joe Namath card which Topps produced in 1965.

We'll explore some of the highlights of each of the years that Philadelphia Gum produced their football sets as well as a representative image from each set. 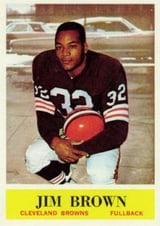 1964 Philadelphia: The design of this inagural is pretty standard with posed player images accompanied only by a solid-colored block at the bottom that contains the player's name, team and position. The color of the box corresponded to the team that the player represented. A white border runs around the card and also runs between the photo and the block of text at the bottom of the card. The card backs are printed with light blue, featuring a helmet-shaped icon with a card number inside and the player's name, team, position and vital statistics to the right. There are two blocks below that. The first has either yearly and career statistics or a short biography for players whose positions didn't involve statistics. The larger block includes a comical cartoon about the player.

One interesting note about the 1964 Philadelphia Football card set is the legend of the convertible Cadillac that appears in the background of players depicted from the Cleveland Browns. Many hobbyists have claimed it was Jim Brown's car.  Others have suggested that it was a car from Brown's dealership and others claim that the pictures were merely taken next to a parking lot. Whatever the reason for it being included, it makes those cards stand out. 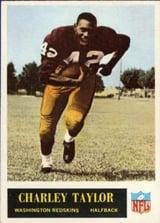 1965 Philadelphia: The follow-up to the inaugural 1964 Philadelphia Football Set, the fronts of the 1965 set are again dominated by a large player image featuring posed "action" photographs. A solid-colored box at the bottom left of the card features the player's name, position and team. The NFL Shield logo appears in the bottom right corner.

The card backs are printed with red and a box at the top includes the player's name, team, position and vital statistics. 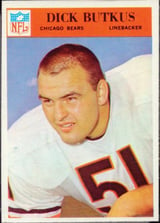 1966 Philadelphia: Perhaps the most popular and most valuable of the four Philadelphia sets, the penultimate 1966 issues boasts a large photo of the player in a posed portrait-style picture. A solid-colored field above the player contains the name, position and team while the NFL logo can be found inside the box in the upper left corner. The front border is white and the backs feature a green color and notes the player's name, team, position, vital stats. 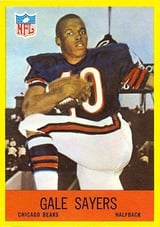 1967 Philadelphia: The final of the four Philadelphia sets is by far the easiest to identify, as it features a very noticeable yellow border.

All-in-all, we've had a blast going through this collection and look forward to going through all of it and sharing these cardboard treasures with you in coming blogs and through our eBay auctions.