Catching a Break – A Vintage Break

Recently, a gentleman from Pennsylvania was watching our affiliated Vintage Breaks broadcast and noticed that we were breaking a 1985 Topps Garbage Pail Kids pack. As a Vintage Breaks customer, the gentleman contacted Just Collect because of the affiliation and advised that he had a significant hoard of Garbage Pail Kids cards from all 15 Series released from 1985-1988, including complete sets of each series, wax boxes from many of the later series and hundreds and hundreds of duplicates. He had purchased the collection from a friend of his that had collected the issue and had squirreled away this non-sport treasure trove.

Originally released by The Topps Company in 1985 as a parody of the Cabbage Patch Kids dolls, Garbage Pail Kids (GPK) became an underground hit, but mass appeal was slow in developing. Similar in style to Wacky Packages, GPK featured character names that were word plays. 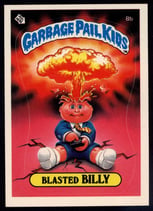 The product picked up steam as teachers cited the cards as being distractions to their classrooms and many schools actually took steps to ban students from bringing GPK's to school. However, the novelty began to wane and with slumping sales, a planned 16th Series was scrapped and the original series (OS) concluded with the Series 15 release in 1988.

Although the 3-year run of GPK cards was a commercial success, screen adaptations were not as successful. An animated television series was created, but due to parental complaints, the scheduled broadcast was postponed. A live action movie (The Garbage pail Kids Movie) was also created and released in 1987 and advertised on the Series 9 and Series 10 box-topper poster and variant wrapper. It bombed critically and commercially and has been dubbed by some critics as one of the worst movie ever made.

Perhaps the most iconic card in the set is card 8a (Adam Bomb). The image was used on the wax packs of the first five series.

We provided an estimated purchased offer on the collection based upon some images and a detailed description of the entirety of the collection. Our ballpark estimates met with the seller's anticipation and he agreed to ship the collection to our Somerset, NJ office for in-hand review, final evaluation and our purchase offer.

Upon receipt, we examined the collection which included 3 complete Series 1 sets, both "a" and "b" as well as two of almost every other series including most of the variations. In addition, there were complete wax boxes from Series 8 through Series 15 and a few loose packs from Series 4-6.