Star and Fleer Rookies Are Just the Icing on the Cake

There are few athletes in the hobby that are constantly and forever in demand. Perhaps no individual personifies that like "His Airness" himself, Michael Jordan (also known simply as MJ). Jordan's Jumpman logo, even to the casual fan, is probably more synonymous with the game of basketball than Jerry West's silhouette that is the current NBA Logo.

Jordan's cards, from top to bottom, have seen a significant rise in both demand and price. Whether it's a rookie card, an insert from the mid-90's, base cards from now-legendary sets, or unlicensed rarities, collectors are buying up everything MJ.

It is hardly just Rookies and  Rookie Patch Autos (RPA's) that drive the Jordan market, as 2nd year cards, inserts, short prints (SP's), super-short prints (SSP's), and parallels have always been in high demand and show absolutely no signs of slowing down.

With that in mind, it should be no surprise that during the current market explosion in the hobby, Jordan's cards from top to bottom have seen a significant rise in both demand and price. Whether it's an insert from the mid-90's, base cards from now-legendary sets, or unlicensed rarities, collectors are buying up everything MJ.

As we examine the current MJ market, we will be breaking his cards down into three categories: RC's/The Early Years, Inserts and SP/SSP's, and of course, Autos/Patches/RPA's. We'll be focusing on the "Top Dogs," if you will, as well as cards that look to be next in line for that massive surge in value. 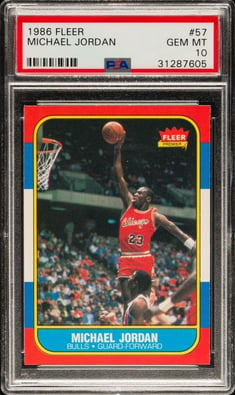 It may come as a shock to some of the younger collectors used to seeing 4 new Rookies of a player each month, but there's only THREE true Jordan Rookie Cards. The crown jewel, of course, is the 1986 Fleer Rookie Card #57 . One of the most iconic cards of all time, it's no surprise the cards value has always been incredibly strong and continues to soar year by year. As with most cards of the 80's and early 90's, the cards are extremely condition sensitive, thus the incredibly large premium you see on highly graded ones. And while Jordan rookie cards have always held great value, the recent explosion in the hobby has taken them to new heights. 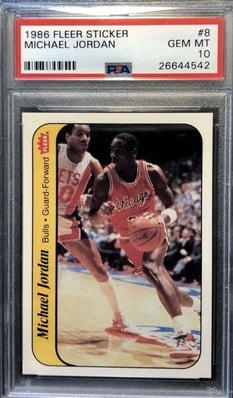 While the Fleer RC's may have become hobby legends, Jordan's first rookie (technically considered an XRC), and therefore first trading card, was the 1984-85 Star Company XRC #101. With limited, location-based distribution, the Star XRC is by far the rarest of all Jordan RC's. It may also be the most controversial. Following the discovery by U.S. Marshalls of over 125,000 Star cards believed to be fakes, PSA refused to grade the cards. SGC (Sportscard Guaranty) has also held fast in not authenticating and grading the Star issue.  That hasn't stopped collectors from dropping big money on ones authenticated and graded by BGS (Beckett Grading Services). And like every other Jordan RC, these have taken off. In 2014, a BGS 8.5 sold for around $2300-$2500. Those same 8.5's now command a cool $13,000, while a BGS 9 sold in July for $21,500. 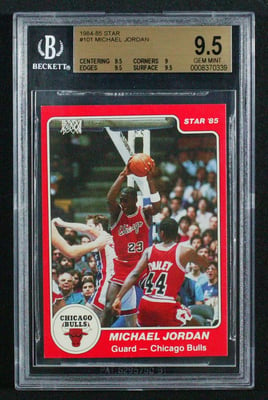 The Jordan RC market has never been stronger and shows no signs of cooling off any time soon. But it's hardly just rookies that drive the Jordan market, so let's take a look at some of the cards that have ended up at the top of the lists of many seasoned Jordan collectors.

As Jordan RC's have soared to unprecedented heights, collectors began shifting their focus to Inserts, Parallels & SP/SSP's. In turn, the insert market has begun to explode, especially highly graded ones, as many are very condition sensitive. And while Michael Jordan only has three Rookie Cards, there's no shortage of inserts and SP's featuring the GOAT (one of the few positives of the "junk era"). Some remain quite affordable, while others have surpassed RC prices and have become as legendary as the superstar donning the cards themselves.

Perhaps no insert has seen a bigger jump in popularity than the Fleer Metal Precious Metal Gems (PMG). One could argue the popularity of the entire insert line stems from the demand and money the Jordan PMG's brings. His 1997-98 Metal Universe PMG, which are #'d /100 (the first 10 are green, the remaining 90 are red), have seen an astonishing rise in value over the last few years. The PMG Green's are rarely put up for sale, with confirmed sales in 2015 (for an undisclosed "six-figure sum") and the record-breaking $350,000 sale back in February. But it's not just the PMG Green's that have jumped in value. The PMG Red's have more than doubled in value since 2014, going from $8,000 to $19,600 in 2017, the last public sale on record. It's clear the owners of these are keeping them for the long haul. 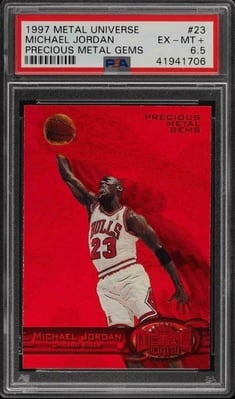 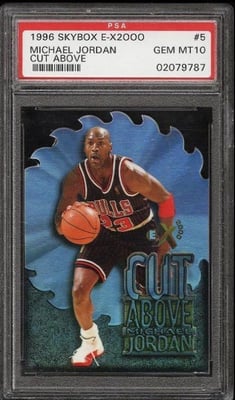 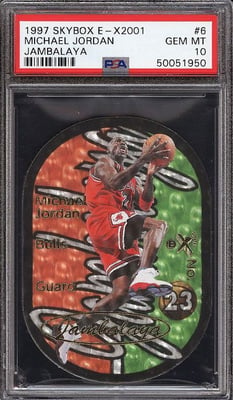 Still Bargains Out There

But you don't need $1000's of dollars to own some very nice Jordan inserts, as there are tons on the secondary market now for great prices. And as more and more of the bigger inserts get snatched up and stashed away, other inserts will take their place. Cards like the 1992-93 Stadium Club Beam Team #1 can be had today for around $130 for a PSA 9, or $50 raw. Absolutely incredible considering the significance of the Beam Team name/line. Or a PSA 10 of the 1996-97 Fleer Metal Shredders #241 can be had for $60-70, a steal considering the iconic status of the set. Even oddball cards, like the Dennis Rodman 2018-2019 Panini Contenders Winning Tickets with Jordan in the background (contractually, MJ can only appear on Upper Deck cards), goes for $75 for a PSA 9. Jordan's mere presence on a card, even blurred in the background, causes the needle to shift.

The MJ Insert/SP/SSP market has something for everyone. Whether you have enough RC's and are looking to expand the collection, or if you're collecting on a budget/looking for lower priced cards to hold for possible long-term gains, you can't go wrong with Michael Jordan inserts. 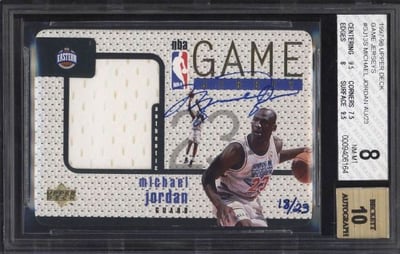 The Michael Jordan autograph card market is quite unique. While the NBA has an exclusive with Panini, Jordan has had an exclusive with Upper Deck from the beginning. His autograph has always been in high demand, and there's no shortage of them available on everything from cards to basketballs (although make sure you're buying certified from a reputable company like PSA), but his auto & auto/patch cards are in a world of their own.

When talking auto/patches, you can't start with anything other than the 1997 UD Game Jersey Auto Patch #'d /23, one of the first cards to feature an autograph, game-used memorabilia, and a handwritten serial #. The jersey swatch comes from his 1992 NBA All-Star game, and last sold in November 2018 for $94,630! Even the non-auto, just game used patch cards sell for around $5,000-$7,000.

Fourteen years after the release of the UD Game Jerseys line, UD released their 2004 Exquisite Collection, an ultra-high end set with some of the nicest cards made (to this day). Included in the set was the Limited Logos Auto/Patch line #'d /50. The gorgeous design paired a bold MJ auto with a patch from a game-used Bulls jersey. With only 50 made, they rarely appear for sale. But when they do, they command a hefty price tag, as the last sale was a $68,323 sale back in March.

If you're not looking for ultra-high end, UD does have plenty of affordable options to add an MJ auto to your collection/hold for long term. A PSA 9 2013 SP Authentic Canvas Auto just sold for $900, but most certified autographs are going to be $1,000+. And with the amount of Jordan fakes out there, getting a certified autograph is a must.

The Jordan market, just like the hobby itself, shows no signs of slowing down. Even decades after being retired, Jordan continues to break records, as just recently the complete 2003-2004 Exquisite Rainbow (1 each of the 6 variations in the set) just sold for the highest price for a card lot in PWCC history (listed at $1.5 million OBO). The debate of who's the GOAT of the NBA may never end, but there's no question who is the undisputed king of the basketball hobby.