“Perfect Stooge” is an oxymoron. Unless of course, you are referring a 1959 Fleer 3 Stooges card graded a PSA 10, then, that description becomes 100% true. The trio of “Moe, Larry and Curly” have become immortal in American and worldwide pop-culture.  The Three Stooges comedy act was born in the vaudeville entertainment period in the late 1920’s, and offered farcical slapstick comedy to audiences far and wide.  Still forcing lots of laughs almost a century later, “the Boys” are also immortal in the card collecting hobby. The 3 Stooges debuted on cards in this Fleer production. Curly is honored with the #1 card in the popular set, and makes his card the most desirable by collectors. Numerous veteran card collectors often state that the ’59 Stooges set remains popular and highly sought across generational lines. This 1959 card #42 “Hair Raising Experience” pictures the Stooges in one of their famous comedic antics, with Curly the brunt of Moe’s shenanigans, being doused with a hair growing potion.  The card back contains the text of the joke from the show’s script, a drawing of Moe knocking his cohorts heads together, and a crown outlining the card number.  It exhibits four razor sharp corners, excellent color contrast and an outstanding appeal to the viewer. A quick look at recent population entries for this card reflects only 5 have gained the “Gem Mint 10” grade, while approximately 75 collectors are documented to be chasing the initial set of the comedians. No ’59 Stooges card #42 in the Gem Mint grade of 10 have been seen on public sales venues for approximately five years. Current sales information for similar Stooges cards in this top condition peaks in the thousands of dollars. That value is more than the actors were paid collectively to make on episode. One of those five gem cards is available at our eBay site. Fleer issued a black and white set of 3 Stooges cards in 1965 to promote a Stooges Movie, and FTCC printed a set in 1985 and another in 1989. DuoCards issued yet a later set to promote another movie.  None of these recent sets captivated the collectors like Fleer’s ‘59s.  With so few being offered in resent years, this one provides you with the opportunity to add one in the highest available grade to your collection. If you are a Non-Sport, 3 Stooges or 1950’s era collector, this “Perfect Stooge” card could be yours. 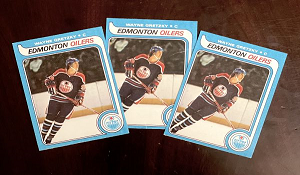