It has been nearly 100 years since the infamous “Black Sox” Scandal, so I'm not ever sure if people care about it anymore. I mean, we all acknowledge the fact that it happened, but do we care as much about that as we do about Barry Bonds or Alex Rodriguez and their alleged damage to the integrity of the game? I think not. Probably because we didn't live through it that it doesn't impact us as much and it’s just registered as an historical event in the game of baseball. We lived through the Pete Rose gambling saga, the “PED aided” homerun race of Sammy Sosa and Mark McGwire, the record setting and allegations surrounding Barry Bonds and the admissions and denials of PED use by Alex Rodriguez. We invested years of fandom. We invested money buying their collectibles. We weren't even fans of the teams, but we invested our time to watch every Cubs and Cardinals game in ’98. Now, they are punchlines . . . afterthoughts in discount boxes.

The “Black Sox” Scandal? Does anyone really care?  You betcha!  Not in the same brush-them-under-the-rug way of the McGwire, Bonds, Sosa and A-Rod, however.  The “Black Sox” Scandal and the 8 players associated with the subsequent trial have become almost folklore.  And one of the treasures, one of the scapegoats, one of the real travesties to come from the dark days of the era, “Shoeless” Joe Jackson, has grown in popularity as the generations pass. 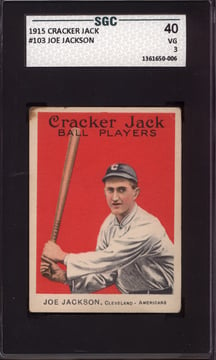 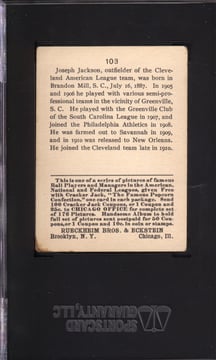 Joe Jackson was appropriately nicknamed “Shoeless”, and he once played a game in just his socks because he had blisters on his feet. Jackson was also a pretty incredible ball player back in the day. For four straight years, from 1911-1914, he was in the running for league MVP, while leading the league in hits two of those years. In all, he ended up playing 13 years in the Majors, amassing eight 150-hit seasons. In 1913, he came in 2nd in MVP voting, as he led the league in hits, doubles, slugging percentage, and OPS. He fell short to Walter Johnson, who had just a ridiculous year, posting 36 wins with a 1.14 ERA. Although his Major League career was cut short as the result of his permanent suspension from baseball for his alleged involvement in the “Black Sox” Scandal, Joe Jackson is one of only two ballplayers to ever eclipse 1700 hits, 750 RBIs and 200 SBs, while posting a batting average over .350 for their career with Ty Cobb being the only other! Now, a little more about our incredible Joe Jackson baseball card.  The 1915 Cracker Jack set is one of the most popular prewar sets in the entire hobby. It has an allure that is like no other.  Given the rarity, the inclusion of so many Hall of Famers, and the aesthetic design, it doesn't matter what condition the cards are in, they sell – and sell for a lot. The two key cards in this set are Joe Jackson and Ty Cobb, with Jackson being more rare and valuable. Today, there are fewer than 150 examples of the "Shoeless” Joe Jackson card in existence (PSA/SGC), with just a handful of them hitting the auction block each year. This is why we are so excited to present this auction, as one collector will win a cornerstone piece of collecting history! This particular example is spectacular. The technical grade given to this card, an SGC 40, gives it no justice. The card is extremely well centered, with light to moderate corner wear, and has no signs of paper loss. The primary “defect” is that the card has is the small candy stain in the upper left corner – which the majority of collector’s will overlook. I mean seriously, look at the color and registration the card presents! It’s amazing at how well Jackson’s image pops right off that red background. You're not going to see another card of this caliber for quite some time, which is exactly what every hobbyist is thinking – evident of the card’s recent bidding frenzy. This card actually came from a large ungraded collection that we bought recently from a long-time collector in Tennessee. Collected over the course of decades, this Joe Jackson, as well as most of the other cards in the collection, has not seen the light of day in the hobby for many, many years.  We have opted to get many of the key cards from this collection professionally graded and will be offering them for auction in the upcoming weeks.  You can read about that story here:  "The Volunteer Collection".  Don't miss out on this unique opportunity to make a sound investment for your collection, and to own a piece of baseball history.