War raged in Europe and Asia.  Tensions were taut in other parts of the world.  And baseball reigned in the sports arena in these last few months of peace in the United States. Enter Gum, Incorporated, and its third issue of baseball themed trading cards.  The Philadelphia based confectioner, founded by Jacob Bowman, controlled over 60% of the bubble gum market in that period.  In the late 1930’s, Gum, Inc., added various trading cards to packs of their main product, and in 1939 through 1941, Gum, Inc. issued annual baseball themed series.  The 2-1/2” by 3-1/8” cards were larger than the previously issued caramel and tobacco offerings, and in 1941, Gum, Inc. really rocked the card collecting world.  Their baseball cards were in eye-catching, view-drawing, “WOW” inspiring attractive “living” color!

Smaller by one half of their initial set of 1939, and by one third of the penultimate 1940 set,  the 1941 issue starred the big three of Ted Williams, Hank Greenberg and “The Yankee Clipper”, Joe DiMaggio.  The 72 card set of 1941 is the only group ever printed which included all three DiMaggio brothers in the same set. Joe’s brothers, Dom and Vince, both had productive major league careers.  Joe himself spanned legendary eras of the Bronx Bombers history, playing along side diamond luminaries such as Lou Gehrig, Tony Lazzeri, Red Ruffing and even Paul Waner, while passing the torch to his heir-apparent, Mickey Mantle.  Joe earned three American League MVP awards, 13 All-Star game invitations, one Major League MVP trophy and 10 World Series appearances along the way. 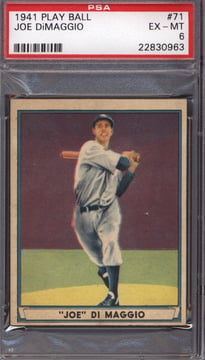 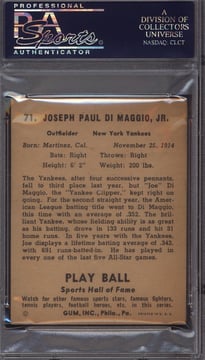 The 1941 Play Ball card of DiMaggio, numbered 71 in the 72 card set, is Joe’s first full color, full-bodied pose among his many baseball cards.  His pose is “The Clipper’s” classic, standard follow-through stance, with pastel tinted stadium and afternoon shadowed background, evoking a trip to the ball park long ago. The image of DiMaggio simply jumps off the cardboard, putting you right there at the field watching him swat another fastball for a clean hit.  The card, the color, the “Clipper” – ranks in the upper 20% of high grade cards from the set. This one represents a wise investment adding substantial value to any collection. Joe DiMaggio is one of the “Big Three” players in this, coming from one of the “Big Three” sets in the hobby, those being the T206 tobacco cards, 1941 Play Ball and 1952 Topps. It came our way in a recent acquisition.  We obtained this and several other 1941 Play Ball cards from a New Jersey family who thought the collection had been lost or stolen.   Just Collect is currently offering this iconic issue of one of baseball’s and the New York Yankees greatest of greats at auction on our eBay site.