Jackie Robinson broke the color line in major league baseball in 1947, and his rookie card, issued by the Leaf Gum Company one year later, broke the color line in post-war baseball card sets.  The skip-numbered set featured the Brooklyn Dodgers sparkplug to six World Series during his career, along with a host of past and future Hall of Fame Players. This Leaf Jackie Robinson rookie card, #79 in the 98 card set, displays near-perfect side-to-side and top-to-bottom centering.  It continues to be one of the most sought after of all of his cards.  It retains strong corners and a tremendously clean card back.  This representation could arguably exceed its PSA 6 EX-MT rating by perhaps one or two grades.

The 1948 Leafs were printed in a variety of portraits and unique poses, all with backgrounds of new and vivid colors.  The subtle yellow background on Jackie’s rookie card highlights the registration and presentation of the portrait of Jackie himself. Hobby historians have documented that half of the set are short prints.  Add to that fact that cards from this set are seldom found any higher than low to middle grades, the set poses major difficulty for collectors to complete. 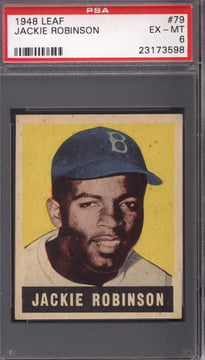 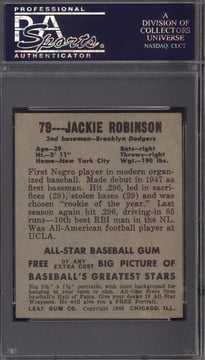 Jackie Robinson’s courageous handling of his historic entry to the major leagues was recently chronicled in the movie “42” in 2013.  The film reintroduced his impact on baseball and on society to the public.  His popularity and baseball achievements, such as earning the 1949 National League MVP award and a deserved place in the Hall of Fame continued the chase for his rookie card among collectors.  Over the past several years, high collector demand has continued, thus the value of Jackie’s rookie card has appreciated over that time. Many of baseballs icons welcomed him to the Hall of Fame in Cooperstown in 1962.  Jackie also shared a distinguished place in the 1948 Leaf set with such other notable rookies as Stan Musial, Satchel Paige and Phil Rizzuto. It is fitting that All-time Baseball Greats Babe Ruth, Ted Williams and Honus Wagner join Jackie in this Leaf edition.  Just Collect is actively buying complete 1948 Leaf baseball card sets, as well as several other sets from the early 1900’s through the 1950’s.  Here is a list of sets we are buying. It has been quite a while since we have acquired a Jackie Robinson rookie card in this high of a grade.  This one is available to you via our eBay auctions.