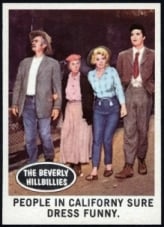 But They Weren't Athletes

Just Collect's logo features iconic images of some of the greatest athletes to ever play professional sports.  What it doesn't include are some of the most iconic characters that we have witnessed on television, movie screens or on the pages of our favorites comic books.

Not Everyone Is a Sports Fan

Now, just because the Three Stooges or Superman aren't in our logo, don't assume that Just Collect doesn't want to buy vintage non-sports cards.  On the contrary, we absolutely relish the opportunity to review and purchase most pre-1980's non-sport cards.  In fact, we've dedicated an entire page to helping collectors understand vintage non-sport cards and which ones Just Collect is most interested in purchasing.

Many children growing up didn't have an affinity for sports or collecting sports cards.  Some children collected non-sports cards in addition to their regular dose of baseball, football, basketball and hockey cards.

Non-sports cards offered collectors a myriad of options.  You could find educational issues that taught about the government and state histories as far back as the late 19th Century and the widely acclaimed Indian Gum and Skybirds and later Presidents issues that featured great lessons about many individuals in world and United States history.  There was also the propaganda filled issues from Gum, Inc. as the US sat on the sidelines leading up to World War II like Red Menace and Horrors of War.  Other popular issues featured the heroes and super heroes themes of comic stars Superman and Batman and the western stars such as The Lone Ranger and Davy Crockett.  Often times, they were the off-centered comedic issues like Monsters, Funny Valentines and even television shows like Happy Days, Soupy Sales, Get Smart, The Munsters, Star Trek and so many more,

We were recently contacted by a women that had inherited a collection of pack fresh 1963 Topps Beverly Hillbillies cards and wanted to get a free appraisal.  The collection consisted of a near complete set and another 30 or so duplicates.  We reviewed the images and were able to provide an approximate ballpark value and noted that we would not be able to provide a final value until we were able to view the cards in person.  She lived too far away to travel to our office, so she took advantage of our "Mail In Program" and sent the cards to us fully insured and at our expense.  We reviewed the collection, made an industry leading purchase offer and she accepted the offer. 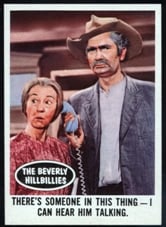 The Beverly Hillbillies was a television staple from 1962 through 1971 and had an ensemble cast featuring Buddy Ebsen (who also starred as Barnaby Jones after the Hillbillies ended), Irene Ryan, Donna Douglas, and Max Baer Jr. (who was the son of former heavyweight boxing champion Max Baer) as a poor, backwoods family who move to Beverly Hills, California, after striking oil on their land. It was followed by another country-cousin series, Green Acres, which reversed the rags-to-riches, country-to-city model of The Beverly Hillbillies.

We Are Always Buying!