Including Multiple Michael Jordan and Many Hall of Fame Rookies!

Sometimes, it isn't about where you go, but just about being there when someone approaches you. Just Collect travels to several shows over the course of the calendar year and we are usually able to set up local appointments with collectors that are interested in receiving an appraisal and a purchase offer on their collection. We are able to buy many of these collections.

On a recent trip to the Greater Boston Sports Collectors Club Show in Wilmington, MA, a collector approached our table with a knapsack and produced a few items and asked if we were interested in making him an offer. The conversation started with the collector presenting a couple of factory-sealed boxes of 1993 Topps Finest Baseball. These are not necessarily the first things one would expect to be pulled from a book bag, but it was.

There's Nothing to Fear

They Bagged Those Sets

Star Company entered the marketplace with their first release during the 1983-84 NBA season. Initially, Star Company issued a set depicting the NBA All-Star in conjunction with the All-Star Game and subsequently released a full league set. In the following seasons, full league issues were released as well as other subsets (also in oversized formats) such as Slam Dunk competitions, All-Rookie, Champions and local and regional advertising sets. Unlike their predecessors (Bowman, Topps and Fleer) that released their cards in wax pack format, Star Company released their sets in team bags form – each team set (or small set) was individually bagged and heat sealed.

Star Company (1983-84 through 1985-86) filled a void between Topps (1981-82) and Fleer (1986-87) by having the only license to produce NBA cards. During this period, some of the most dynamic players in the history of the NBA entered the league and made their debuts on Star Company cards. Players like Michael Jordan, Hakeem (Akeem) Olajuwon, Charles Barkley, Dominique Wilkins, Clyde Drexler, James Worthy, Isiah Thomas, John Stockton and Patrick Ewing all have rookie cards in the Star Company product line - contrary to many people believing that the 1986 Fleer cards are the rookie cards of these Hall of Famers.

Most people first turn their interest to Star Company basketball because of Michael Jordan. Aside from Jordan's rookie card being in the 1984-85 set, he is featured on a number of other cards through the set and subsequent years and subsets. There are a lot of rumors about his rookie cards, but it is our understanding that the 1984 Star Company #101 Michael Jordan card was not part of the "reprinted" and backdated run of Star Company cards. However, there are counterfeits of the 1984 #101 Jordan, so buyers should be wary and educate themselves upon the specifics and differences of the original and the counterfeit. 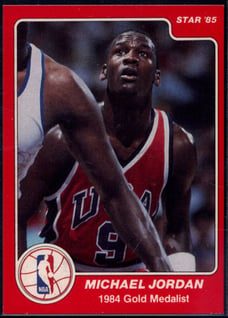 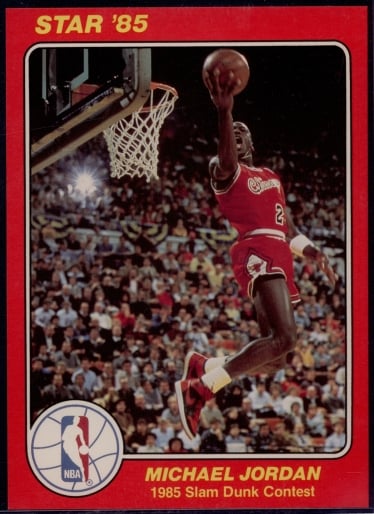 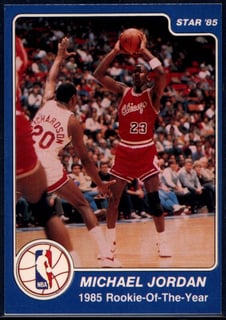 The Star Company portion of the collection that we purchased included almost every Star Company basketball card, including many of the key rookies and most of the subsets and special issues. The collector held onto his #101 Jordan from the Bulls Team Set as it was pending grading with Beckett Grading Service. We're hoping that when he receives it, that he will afford Just Collect the opportunity to purchase the card.