Gadzooks, That's a Lot of Gum!

Most readers are probably not old enough to have been walking through grocery stores in the 1960's and remember the boxes of Bazooka Bubble Gum that would be on the shelves begging young collectors to rummage through the display scouring the backs looking for their favorite players.  Unlike the sealed Topps packs of the day which were a mystery until you opened the packs, the Bazooka Series displayed all of the players on the outside of the box.  So youngsters would have a field day when they would find a hoard of boxes on the shelf.

Issued from 1959 through 1971, Bazooka cards were issued in panels on the backs of boxes of Bazooka Bubble Gum and featured plenty of star power and enough gum to keep a young lad's jaw well exercised. The 1959 Bazooka Set is probably the toughest of the Bazooka Baseball Sets and features Mickey Mantle, but finding original boxes and uncut panels of any year can prove exceedingly difficult.

Selection on a Shelf

One of the great things about the boxes is that almost every single one featured a major star. While some boxes may have flown off of the shelves in hometown cities, there really weren't any "commons" boxes. Sure, you'd have a hard time finding Willie Mays in the Bay Area or Hank Aaron in Milwaukee. Yastrzemski boxes sold off of Boston shelves as quickly as Kaline in Detroit. Mickey Mantle, well, besides probably being the first boxes off of shelves in New York and New Jersey, boxes featuring "The Mick" rarely stayed on any shelves across the country.

Recently, we were lucky enough to have won several complete sets in panel form at auction. The sets that we purchased were 1963, 1964 and 1967. We've always loved these cards and purchase them whenever we get the chance, much like this 1961 Bazooka Set that we wrote about over the summer.  We fell that many of the Bazooka cards are often overlooked and therefore, undervalued in the marketplace.

Bazooka boxes were more than just vessels carrying 20 or more pieces of Bazooka Bubble Gum wrapped with Bazooka Joe Comics (another item kids of the day would collect and redeem for Bazooka Joe rewards). Unlike unopened Topps packs of the day, the Bazooka boxes let you know that players you were getting as there were three cards on the back. The three cards were bordered by dotted lines and were intended to be removed from the box and cut into single cards.

We'd still love to find some original 1959 Bazooka Baseball and Football cards and panels as well as the 1971 Bazooka Hockey Panels.  In fact, if you have any cards, panels or boxes from these years, please contact us -- we are very interested in purchasing them! 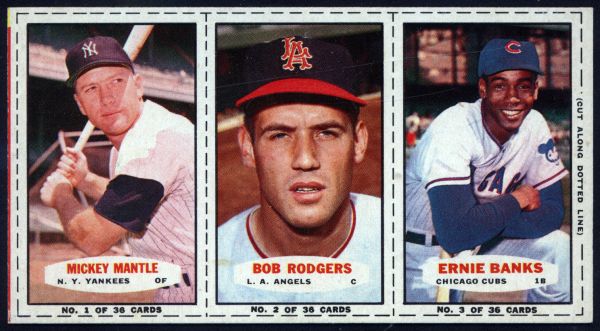 The 1964 Set was similar to the 1963 issue and although many of the same players were used, the images were different than the previous release. 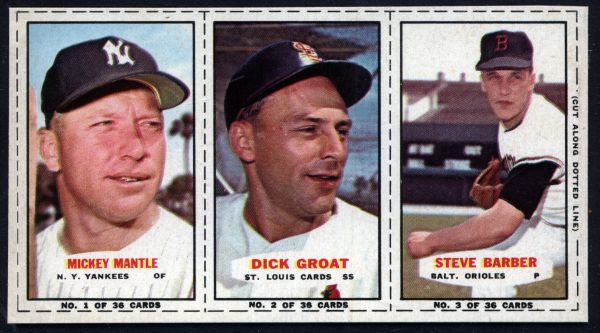 In 1967, the set was issued on 16 different panels (totaling 48 single cards) with the singles measuring 1 9/16" by 2 1/2".  While the 1964 Set was similar to the 1963 issue and although many of the same players were used, the images were different than the previous release, this was not the case a few years later when in 1966 and 1967, Bazooka expanded the set to included 48 players. Unlike the 1963-1965 sets, where many stars were assigned the same card number but had a different photo each year, Bazooka incorporated the same card numbers and playing images for more than three dozen players. In 1967 Bazooka set kept 8 of the 16 panels identical with the only changes being two variations (Frank Robinson was issued in a batting pose – changed from a portrait shot in 1966 and Dean Chance was listed with Minnesota rather than his previous squad in California) and the following players featured in the 1966 set being replaced in 1967: 1 Sandy Koufax, 2 Willie Horton, 9 Ed Kranepool, 13 Roy McMillan, 18 Vern Law, 29 Milt Pappas, 33 Bill Skowron and 37 Jim Grant. 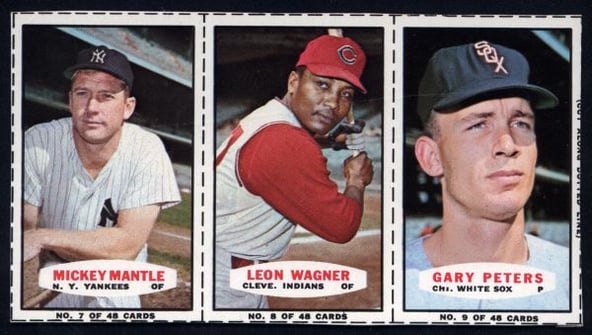