“Antiquities” in vintage baseball cards initiated in the latter half of the 19th century.  One such product of that era is the highly desirable 1895 Mayo Cut Plug set. The date of production precedes both the American League and the World Series.  The cards were printed on rather low quality paper, leading to a lack of sustainability over the 100 plus years age of the set. The black borders lend to chipping and “white divots” decreasing the grade potential of these great 1800’s blank backed baseball cards. Cap Anson, the immortal former first baseman, manager and minority owner of the team then known as the Chicago White Stockings, then Colts, and now the Cubs, is well documented as the highest valued card among the 1895 Mayo’s, as he is the most prominent of Hall of Fame players included.  His HOF mates in the set are Ed Delahanty, John Ward and Buck Ewing.

The explemplary offering shown here is only the slightest measure away from a full number grade.  Anson’s card is accepted as the second (alphabetically) in the unnumbered set.  Since he is issued in the “low numbers”, he appears in his uniform, in contrast to cards 21 through 40 alphabetically, which depicted players in street clothes.  The portrait of Anson gives the impression of sitting right next to him and sharing drinks, perhaps following a game.  This great appearance and vivid photo of Cap Anson brings to mind a definite Very Good to Very Good-Excellent rendering of his 1895 card. 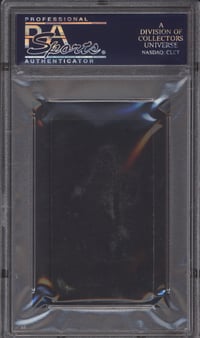 The example you see above has earned the PSA Authentic rating from the third party grading service, and was obtained in an magnificent collection of vintage, antique baseball cards and memorabilia.  Cap’s Mayo Cut Plug cards command opening prices in the thousands, and continues to increase in market value over time. The High-End Collection Cap Anson became the first major league player to reach the 3,000 hit mark.  His .333 batting average and eight times leading the NL in Runs Batted In (RBI) led to his enshrinement in the Hall in 1939. Finding Mayo Cut Plus cards in mid- to high grade is indeed challenging.  Few in any condition have appeared in recent public offerings.  Our current eBay auction provides you with the opportunity to acquire this great example of a 119 year old “antique”  Cap Anson card for your collection.