The hobby of collecting baseball cards evokes lots of conversation, whether it’s casual talk to full blown arguments, the one thing that is always prevalent, is the tremendous, genuine interest. One topic of conversation that invites lots of opinions is that of, what is a “pure” set? I would like to offer up another entry into the discussion of cards that feature more photography and fewer graphics in their design. Some sets that collectors define as “Pure” include the 1948 and 1949 Leaf sets, early 1950’s Bowman sets, and even the 1975 SSPC – literally the “Pure Card Set” (yes, the word was used in its title when released in ’75).

The 1957 Topps Baseball set must also be included when talking about cards that focus on the image over extraneous distractions. In addition to the 407 tremendous snapshots of players and teams, the actual players included in this set, produced by the Brooklyn-based bubble gum company, are a “Who’s Who” among baseball’s modern-era elite. Just Collect obtained a high-grade 1957 nearly complete set – all graded PSA 7 - this week, arriving from a collector in suburban Chicago, and it is “purely” a winner. The photography is the keynote of this classic set. The player cards were of the now standard 2-1/2 inches by 3-1/2 inches, and within their white borders appears a vivid “wall-to-wall” color photo. It was the last year for the “New York” Giants and “Brooklyn” Dodgers, as both teams moved to California at the end of the season. The Athletics played in Kansas City as a temporary home, while the Braves were winning a NL pennant in their adopted city of Milwaukee in ’57. 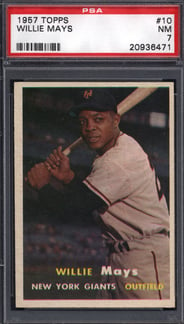 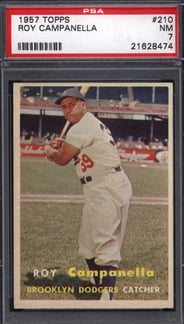 Player names were listed at the lower portion of each card in a subdued font, above the team name and position. The card front text was subtle enough to not detract from the player’s picture. Topps also reintroduced multiplayer cards in the set, with a “Dodgers Sluggers” card depicting Roy Campanella, Carl Furillo, Gil Hodges and Duke Snider offered on card #400; while the very last numbered card in the set, #407, showed Mickey Mantle and Yogi Berra, and was titled “Yankees Power Hitters”. 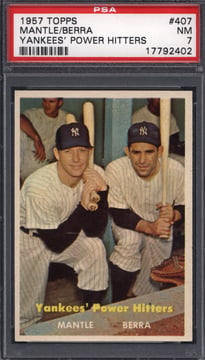 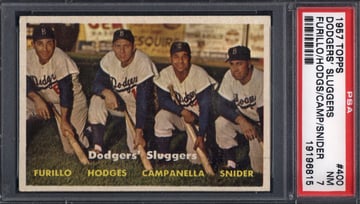 Unlike several other Topps sets from the 1950’s and 1960’s, the last “series” or highest numbers in the set are not the most expensive cards in the set. The cards from 1957 which have proven to be more challenging and scarce are the middle numbers, cards #265 through #352. Premium cards among this rare middle series are Yankee teammates Bobby Richardson and Tony Kubek rookie cards, Hall of Fame member Sandy Koufax, and rookie HOFers Brooks Robinson and Jim Bunning, as well as the Giants and Dodgers team cards. Topps’ innovative and talented card design artists began a longstanding tradition on the set’s card backs, printing the players’ statistics, some major league only, some minor league only and some combined career records. The upper reverse shows the player’s name and “vitals”, such as height, weight, position, hometown, with a baseball on the left corner featuring the card number in red. Biographies of varying length and a cartoon appeared midway down the card backs, just above the statistics table. Gray stock with the reds and blues of the printing made even the obverse of these cards attractive to collectors and fans. In the era of “Willie, Mickey and the Duke”, stars from all 16 teams shone brightly in Topps’ second 400+ card set. Ted Williams was honored as the #1 card in the set, immediately followed by Yankees HOF catcher Yogi Berra. Willie Mays, Mickey Mantle, Hank Aaron, Ernie Banks, and Ed Mathews, along with rookie cards of Don Drysdale, Frank Robinson and Rocky Colavito, are all highlights in this one. A Gene Baker error card, #176, also provides a valuable challenge for collectors who like “oops” issues from card sets. Unnumbered checklists, four contest cards and a “Lucky Penny” insert card when counted, actually make this one the largest Topps sets issued. PSA indicates that 222,161 cards from the 1957 Topps set appear in its graded population report, and while only 190 gained the top rating of “10,” an ample amount totaling more than 80,000 of them rank at “6” EX-MT through 9 “MT.” SGC reflects 19,493 graded examples in their population records, with six of them ranking at the SGC 98 level, and again, a very good amount, 6,147, or one-third of the graded 1957’s, in the upper grades (SGC 70’s through the 90’s). The Chicago-area seller, who started collecting this set as a kid, elicited “pure” elation about dealing with Just Collect:

“I was thrilled with the interaction of your card specialist [Fred] and was very pleased with the quick and easy transaction. I gained trust for Just Collect by reading about them in the SMR [Sports Marketing Report published by PSA], and thoroughly reviewing the web site”, he stated.

It should also be noted, that the entire process of the sale - from the initial phone call, to receiving the 400 graded cards through the mail - took less than a week. We invite other potential sellers to see what others say about us. You can also find a wealth of information and helpful advice about selling and buying vintage sports cards on the Just Collect web site. The market shows that you may find a few bargains among the many sales venues out there, but high-grade hall of famers bring sellers thousands of dollars, high grade sets have approached six figures in various auctions over the past twelve months. Always popular among baseball “purists” and collectors, this choice Chicago area set will be available in our upcoming auctions. Just Collect is always seeking 1957 Topps baseball card sets and singles, and other vintage baseball and sports cards from 1879 through 1979. See our website for how to sell your cards.