When most people hear the mention of Corning, NY, many will immediately think of Corning Glass, Pyrex, CorningWare or Corelle kitchenware.  This would be one of the first things we would think of as Corning Glass is world renowned and most of us have heard of Corelle (which is still manufactured in Corning) and Pyrex.  Just Collect received an inquiry recently from a recently retired gentleman that used to work for Corning and still lived in Corning.  He was interested in selling his childhood collection of more than 7500 cards and contacted Just Collect and a prominent Midwest-area dealer.

Our talented customer service team immediately responded to his inquiry.  A call to the collect began discussions about the collection and what the man's overall intentions and expectations were.

The owner mentioned that he had been doing some homework and that he had been working on cataloging and grading his collection and had begun to put together some idea of what he had and what he thought that it might be worth.  We asked if he had visited our "Everything You Need to Know About Grading Vintage Baseball Cards" and directed him to the page to use as a resource.  We also asked if he could forward an basic itemization of the collection as well as some images of what he felt were the most valuable cards in the collection as well as some representative images of other cards.

Once we received the preliminary images, one of our vintage specialists reviewed the images and prepared an evaluation based upon the images and we were able to have initial discussions with the gentleman with regard to condition and potential value of the key cards and the balance of the collection.  After some preliminary discussion with John, our Vice President eventually spoke with the collector to discuss condition, valuations and making certain that Just Collect would be able to meet the collector's expectations.

Collector is Not Going to Ship

After a very nice conversation, it was determined that there was no interest in shipping the collection, although we discussed shipping his collection to Just Collect via our FREE FedEx Program.  He was adamant that he did not want to ship the collection.  Although every shipment to Just Collect has been issue-free, we also understand the concerns that collectors may have in sending their cards and putting trust and faith in someone that they have never met.  We believe that if anyone is concerned about shipping and Just Collect is not able to travel for the collection, they should try to sell locally (realizing that they may probably be selling for far less than Just Collect would offer).  No one should ever be uncomfortable when doing business.

Our travel criteria typically is that we will travel 4+ hours or fly for collections that we anticipate being valued in excess of $20,000.  The initial evaluation of this collection suggested that it might be right on the cusp and looking at the location, it would be just over a 4 hour drive each way to view the collection.  So, after further discussion, we agreed to meet with the collector at his Corning, NY home to inspect the entirety of the collection and present him with our purchase offer.

Travel For the Appointment

We met the collector on the Tuesday morning right after Memorial Day and arrived about 15 minutes early for our 10:30 AM appointment.  The gentleman met us and had the collection organized and ready for inspection.  Our specialist spent the next 8 hours reviewing the collection, combing through 14 albums, noting condition and preparing an Excel spreadsheet  assigning value for specific star and rookie cards as well as semi-stars, commons and partial sets.

Shortly after 6:00PM, we completed the evaluation and reviewed the finding with the collector and agreed upon a purchase price for the collection that ended up being five figures.  We paid the collector and both parties were very happy with the results and the gentleman helped our specialist carry and load the binders for the return trip back to our Somerset, NJ office.

A Fury of Football

The football portion of the collection consisted of only three binders, but it contained some serious star and rookie power! The collect consisted of complete sets of 1955 Bowman, 1956 Topps, 1957 Topps, 1958 Topps and 1959 Topps.  There were near and partial sets of those same sets that included plenty of duplication of the stars and rookies and also some additional cards from the 1955 Topps All-American and the 1960 Topps releases as well as beginning with 1953 and 1954 Bowman.  And yes, among the many duplicate cards, there were extra Hall of Fame rookie cards of Johnny Unitas, Bart Starr, Jim Brown and Sonny Jurgensen! 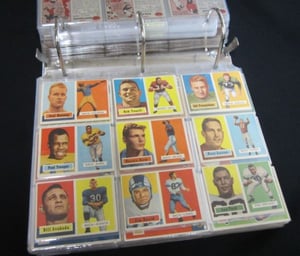 The 1957 Topps Set was nicest condition set of the football run.  Featuring Hall of Fame rookie cards of Johnny Unitas, Bart Starr, Paul Hornung, Raymond Berry, Dick Lane and Jack Butler, this set is one of  the most popular football releases Topps has ever issued! 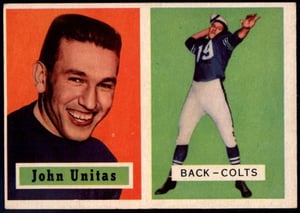 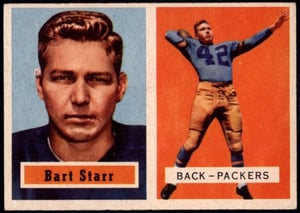 Binders and Binders of Baseball

The collection was housed in chronological and numerical order (thank you!) in both 8 and 9 pocket pages in a total of 14 binders (11 baseball binders and 3 football binders).  The baseball portion of the collection began with a smattering of cards from the 1951 Topps Red and Blue Backs before beginning in earnest with 1952 Topps and Bowman.

The collection began to expand in quantities beginning in 1954, although the 1953 portion did include Mickey Mantle and Satchell Paige! 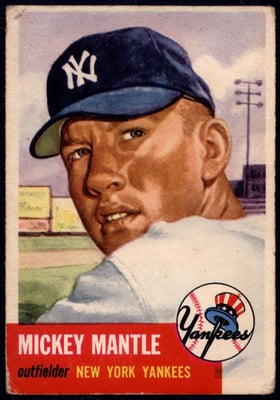 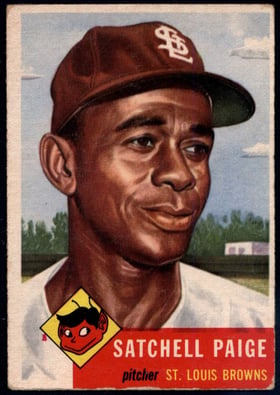 The 1954 Topps portion of the collection contained more than 250 cards and included all of the key rookie cards except Ernie Banks. Rookie cards of Hall of Famers Hank Aaron, Al Kaline and Tommy Lasorda (including a duplicate) were represented as well as cards of Jackie Robinson, Willie Mays and Ted Williams. 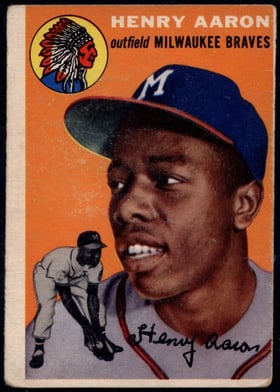 Included in the 1955 Topps portion of the collection that consisted of more than 350 cards were most of the stars.  In addition, three rookie cards of both Sandy Koufax and Harmon Killebrew were reviewed as well as two rookie cards of Pirates' legend Roberto Clemente! The 1956 Topps cards included a very presentable VG condition Mickey Mantle card as well as many of the other stars such as Ted Williams, Al Kaline, Hank Aaron, Willie Mays and many of the other greats of the day.  There were plenty of team cards and the rookie card of Hall of Famer Luis Aparicio. 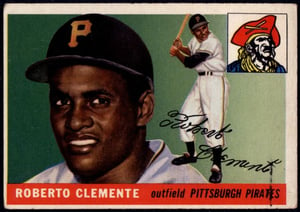 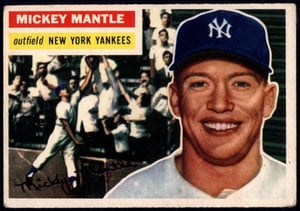 The balance of the collection included nearly complete sets from 1957 through 1961 with plenty of duplicates and also a 1962 Topps Mickey Mantle.  The duplicates were interesting as there were some that featured as many as 11 cards of one player.  The 1957 Topps collection included most of the stars from the set and also most of the rookie cards including three cards each of Brooks Robinson, Don Drysdale and Bill Mazeroski as well as two Jim Bunning cards.

The collection is another that we were happy to have reviewed and purchased and want to thank everyone that contacts us regarding their collection.