For readers old enough to remember, "What exit?" was a catchphrase from a Saturday Night Live skit with Joe Piscopo playing a character  named Paulie Herman who hailed from Piscataway.  The joke has some root of truth in many in New Jersey identify by their proximity to the exit number on the New Jersey Turnpike or the Garden State Parkway.

A New Jersey collector recently contacted us and mentioned that he lived just off the Garden State Parkway.  All I could hear was the Paulie Herman character asking, "What exit?"  We discussed the collection and the collector mentioned his expectations as the majority of the value in his collection was graded cards and he knew the "real" value of these cards.  We asked for a list to run a preliminary evaluation and present a tentative offer to make certain that we were going to be on the same page with respect to value and what we would be able to pay for the collection as we moved forward.  The initial evaluation and offer were agreeable and we invested the time in securing a list of the balance of the graded cards and came to an agreement in principle and also knew that there would be a collection of ungraded cards, autographs and other hobby related items that we would evaluate in person.

The gentleman did not want to travel with the collection, so, given the valuation, we agreed to drive and to meet him at his New Jersey home -- that was "just off the Garden State Parkway."  Rather than ask "What exit?" we secured the address and arrived to review the collection.

Is That a Just Collect Label

Upon arriving at the collector's home, we sat down and began to review the graded cards in the collection.  This was going to be the easiest part as we had already done the initial evaluation and were just looking to see if there were opportunities to increase the valuation based upon eye appeal of some of the graded cards.  We did, in fact, boost a few of the values on some of the cards.  While going through the cards, we noticed a card sleeved with our inventory lable.  It is always a bit rewarding to review a collection and find cards that have been purchased from Just Collect.  It reaffirms that we must be doing something right that our customers believe in us enough and trust us enough to value and prepare an offer to purchase their collections -- collections that we have obviously been a part of them building.

A few of the graded cards featured Yankees Hall of Famers Lou Gehrig on his 1934 Goudey card graded SGC 30, Joe DiMaggio on the 1941 Play Ball issue that was graded SGC 50 and Mickey Mantle on a 1953 Topps card graded SGC 30.  Many other prominent Yankees were also scattered throughout the collection.  Rookies and early cards of Yankees legends included Yogi Berra, Whitey Ford, Phil Rizzuto, Frank Crosetti, Red Ruffing, Elston Howard, Billy Martin, Miller Higgins, Wally Pipp and so many others. 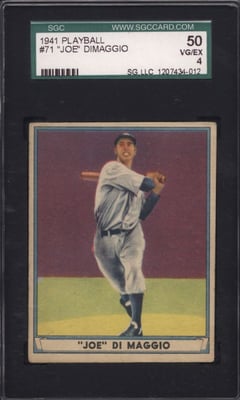 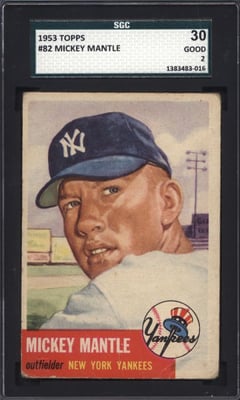 While the collection contained a focus on the New York Yankees, the collector also amassed other stars including Christy Mathewson, Satchell Paige, Pee Wee Reese, Duke Snider, Jackie Robinson, Ted Williams, Hank Aaron, Willie Mays and a host of Hall of famers from the T206, Goudey, Diamond Stars and Play Ball issues.  Also, there were quite a few Red Man Tobacco cards with complete tabs ranging from 1952-1955. 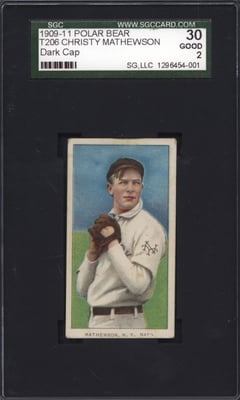 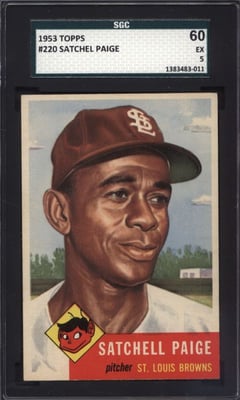 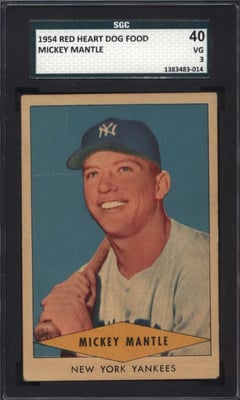 The graded portion of the collection seemed quite focused with attention paid to major players and stars.  The ungraded collection demonstrated the wide range of interests that our collector had over his time accumulating his stockpile. There were autographs obtained from writing to the players during the 1970's and 1980's, singed business cards, signed Hall of Fame Plaque cards, random cards of players that had unique back stories or had an odd place in baseball history.

A few such pieces included a 1952 Topps Gus Zernial card which many collectors are drawn to because of the 6 baseballs nailed to Gus' bat to commemorate that he had tied an American League record by hitting six home runs over three consecutive games spanning May 13–16, 1951.  Additionally, there were several cards of "Marvelous" Marv Throneberry, almost a cult figure in New York because of his sense of humor and quirkiness and being a member of the infamous but loveable 1962 New York Mets. In one famous story, on June 17, 1962, Throneberry hit a triple against the Cubs. However, he was called out after Cubs Hall of Famer Ernie Banks took the relay throw and proceeded to step on second base. "He didn't touch the bag, you know," Banks is alleged to have told umpire Dusty Boggess. Throneberry was called out at second and according to some accounts, Mets manager Casey Stengel came out to argue the call, but he was told by Boggess, "Don't bother arguing Casey, he missed first base, too." After a pause, the witty Stengel replied, "Well, I know he touched third base because he's standing on it!" The next batter, Charlie Neal, hit a home run and Stengel to come out of the dugout followed him during his homerun trot, while pointing to make certain that he touched all four bases.

As you can see near the end of the video, there was a partial box of 1976 Topps Baseball with 11 unopened packs and a full box of 1979 Topps Baseball that contained 36 unopened packs.  Additiaonlly, there were some random non-sport cards and other oddball items in the collection.  Some of which had nice value and some that had little value, but everything was accounted for and included in the final evaluations.