The Media Mogul Breaks Some Packs with Vintage Breaks!

Last night I had the amazing opportunity to meet Gary Vaynerchuck (Gary Vee), CEO of VaynerMedia, at one of his wine tasting events. Towards the end of the evening, we were able to break away from the crowd, talk sports, and opened up five packs of vintage cards – and yes, he even ate a 32-year old stick of bubblegum!

It's not often that you get to meet a media mogul, let alone rip through a pack of vintage sports cards with one. Well, thanks to the intro by a friend, I did both last night.

Given his affinity for all things sports, coupled with his countless social media references to garage sale flips, it was only natural that we would have a blast ripping through unopened packs, including a 1986 Topps Football cello, which contained the aforementioned stick of bubblegum that Gary chomped on, without hesitation. As you may notice, in the video, I'm the guy in the dark colored polo shirt, dressed to the nines for a "baseball card guy."

Lucky for us, I brought along four other packs including a 1993 Upper Deck SP Baseball foil, 1989 Upper Deck foil, 1978 Topps Basketball wax and a 1979 O-Pee-Chee baseball wax.

While we didn't score big in any of the packs, I was amazed at Gary's instinctive knowledge of the hobby and the players. I believe he, too, would be a great Breaker.

While we didn't pull a Jeter, it didn't keep his enthusiasm from waning. Not even a little bit. 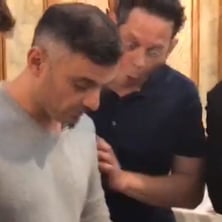 Throughout the entire night, Gary kept referring to me as "the guy whose eyes almost popped out of his head," a subtle reference to our legendary 1955 Bowman Baseball cello pack break during the 2018 National Sports Card Collectors Convention in Cleveland, Ohio, where we pulled a $50,000+ Mickey Mantle from that pack.  It was likely one of the highest-dollar trading cards ever pulled from a sealed pack live on YouTube.com/Vintagebreaks, and arguably the most exciting moment in the Convention's 39 year history.

I also showed Gary the 1986 Fleer Michael Jordan we pulled from pack 19 of our 1986 Fleer Basketball box break back in the summer of 2017, which helped to launch VintageBreaks.com. That Michael Jordan card received a Mint 9 grade from PSA. As I had explained to Gary, only a small print flaw kept MJ from attaining a Gem Mint 10 grade.

As a collector of unique items, I also made sure that I had packed a couple of baseballs and asked Gary sign one of them for me. It's safe to say that this is my first autographed ball from a CEO.

Gary invited me down to his office to rip some more vintage wax packs. This baseball card nerd can't wait!

What an exciting time for Vintage Breaks!

Vintage Breaks is located in Somerset, NJ, and offers collectors the opportunity to purchase spots in random breaks of vintage sports card packs and boxes. Follow all the live action on our social channels:

That was cool to watch as it brought out all the card "nerds" in the room! Breaking packs of cards transcends time. It reminds us of when we were young, had less worries, and the simple pleasures (sort of speak) in life, for instance: earning money to buy the next pack of cards. Excellent job Leighton! Your enthusiasm is contagious!
jeknudson@gmail.com - October 10, 2018 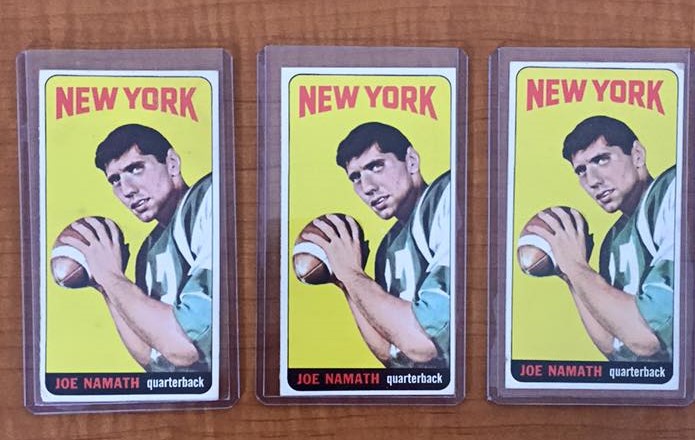