We have seen cards stored in all types of places. From garbage bags, to old shoe boxes, to even inside of an early 1900's Bible. And now we can add a new place to the list - potato chips boxes. What? Don't worry, I'll explain in a little bit. Finding these collections in strange places is one of the most fun parts of the process, learning the story behind each collection and how they survived 50, 60 or even 70 plus years after production! Every individual or family has their own unique story about their collection, with their little quirks and nuances. From what types of material they bought, to how they bought it, to how and why they kept them for so long. This truly makes collecting vintage sports cards one of the greatest hobbies in the world.

A few weeks ago, we were contacted by an old customer of ours, who was in the process of moving and downsizing his collection. He called us and summarized his collection in one bold statement: "I basically have every Topps set, from 1951 to present, including most variations, and I'm looking to sell."

Well sir, say no more, you have our attention!

We spent a little bit on the phone vetting him and his collection, quickly realizing that this sounded right up our alley, and we had to see the collection. The collection was way too large for the gentleman to bring into our office and we would have been happy to travel across the country for something special like this...but he happened to be local to our main New Jersey office! So, without seeing any images, or knowing the exact condition, we set up an appointment to go see this massive collection at his house. Since this was a rather large collection, we knew that we'd need some time to go through it all, and didn't want to rush - so we figured a Saturday might be best. He concurred and now we have have booked ourselves an exciting appointment!

So, we showed up at his home, and he directed us into his kitchen, letting us know this is where the collection was. I thought to myself, wow the kitchen is definitely a weird spot to keep thousands of baseball cards. He then explained to us that since people are constantly walking through his house (because he's moving and it's on the market), he's constantly moving the collection around from different rooms, and this wasn't it's permanent spot. He also stressed that it's become a bit of a chore. Anyway, we were a bit confused at first, because the only thing we saw in the kitchen were about two dozen Herr's potato chip boxes stacked up. So I thought to myself...Is this guy a delivery man? Maybe he just really likes chips? I don't know, but this was a little odd, considering cards are usually just stored on a shelf, in a drawer, or in some nondescript box. But let me tell you, after he opened up the first box and showed us what was inside, any questions we had quickly evaporated. 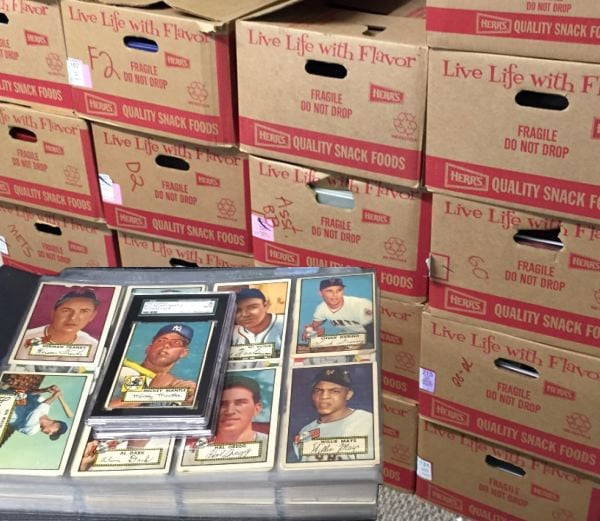 It turns out, that he actually worked for the Herr's potato chip company during the height of his collecting career, so instead of just throwing the boxes out at work, he brought them home and stored his collection in them! Each set was meticulously built and sorted by team, and then by card number. Can you imagine collecting a set by team? It's much easier, and much more common, to collect by card number. Anyway, each set was preserved nicely by being placed into sheets and binders, avoiding any further chance of dinged corners, chipped edges, or grease-stains from eating plenty of chips over the years.

We spent the next five hours or so evaluating the collection - from re-organizing the sets (because they were not in number order), to determining the conditions, to researching the current market value of each one, and it took quite some time and patience. We finally finished the appraisal process and were ready to make him an offer. As we were going over the numbers with him, his wife happened to walk in, and the timing couldn't have been worse. With a surprised look in her eyes, she muttered to him, "You're really selling your cards? How could you? You love them. Why don't you just sell the silver and gold we have instead?!"

Well, after a few chaotic seconds, he broke the silence and explained to his wife that it was time for him to part ways with the collection. He had already received his full enjoyment out of them, and wanted to give someone else that chance. This would also make it easier on them for the move logistically, while also providing an opportunity to make some money in the process.

You see. Everybody wins here.

Later on, his wife explained to us that she was just shocked that someone could walk into their, evaluate the whole collection, make her husband an offer that he wanted, and would be able to take all the cards home with them - all on the same day! It just boggled her mind, considering his emotional attachment and the volume of cards. But hey, that's what we do!!

So yes, we ended up buying the collection right then and there, and were now tasked with the obstacle of actually fitting everything into the Jeep - which again, his wife had doubts on. Took some time, but everything was able to fit.

Even though this collection was mostly mid-grade stuff, it was all sets - something we absolutely love. And, he had everything from 1951 on up, so there were lots of vintage cards! As you may have guessed, the main draw was the 1952 Topps baseball set - complete with the first Topps cards of Mantle and Mays. The pair are not in great condition, but there are always collectors that want to buy those cards in any condition. The Mays was in alright shape, dinged up a little on the corners with a small crease, but still worth somewhere close to a thousand bucks. The Mikey Mantle rookie on the other hand, was pretty beat up, and was slabbed Authentic by SGC. Essentially, when something comes back as Authentic, it's a lower grade than a "1", and thus deemed less valuable typically. The Mantle is in decent condition with presentable eye appeal, but trimmed. The card presents nicely especially for a budget conscious collector, and is still worth between $4,000 – $5,000. The rest of the set averaged GD to VG, which again, was a non-issue, because everyone collects the 1952 set regardless of condition, so we will have tons of people interested in the singles. It's by far one the hottest sets in the hobby right now, with no slowing down in sight. 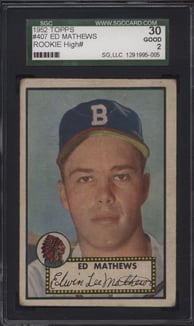 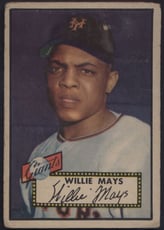 Similar to the 1952's, the 1954 Topps set has some cards that present much nicer than the technical grade they are assigned. The Hank Aaron rookie for example, is really nice, but plagued by a small, almost unnoticeable pinhole in the top left corner. The card graded a PSA 1, but without the small pinhole, looks to be EX to EX/MT. The Hank Aaron rookie card, regardless of condition, is one of the most sought after cards in the entire hobby, so we'll have no issues moving this lower graded example. The 1955 Topps set, which has the Koufax and Clemente rookies, also caught our eye, because those two also make up the that short list of "top baseball cards to own". The 1955 set is also highly collected because of it's breakthrough design, as it was Topps' first horizontal styled set, and the cards were even a little bigger in size. Collectors just love this set for both it's design and the star power that's included within. 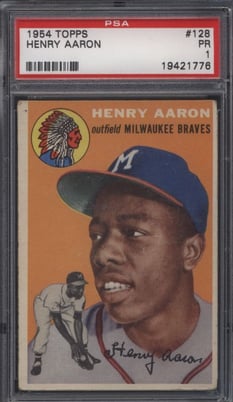 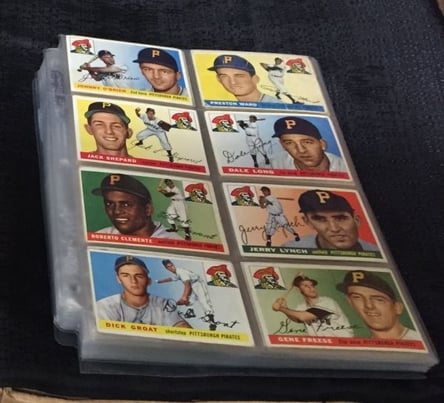 The two other highlights from this collection are the Bowman sets from 1948 and 1955. Again, the conditions weren't too strong, but they were complete sets that hold some value. The 1948 Bowman set ranged from PR to VG, and the 1955 Bowman was a little nicer, ranging from GD to VG. The key cards in the 1948 Bowman set are the Yogi Berra and Stan Musial rookies, which in this collection were also "collector-grade", but that was ok with us.

The same holds true for all of the other key rookie cards throughout this entire collection... mostly collector-grade. But for this collection, unlike the Adco Collection, the value is in the total volume of the cards, not sure much in the individuals. And believe me, when you have tons of lower grade material, the value will start to add up.

Here's a few of those examples:

We are always on the hunt for vintage sets, so if you have a collection that you are interested in selling, contact us today to schedule an appointment! We'll provide you with a free appraisal, and can make you a cash offer on the entire collection. We also travel to buy collections, so check out our schedule to see when we'll be in your area!

Here is what the seller had to say about Just Collect:

"After 35 years of carefully building my collection it is emotional process to let it go. But you made me feel that you truly cared and respected my collection. The price we agreed upon was very fair and you did not try to low ball me. You truly have a pulse on the hobby and running a fair business. Our conversations were no bull and genuine which is a nice change when conducting business today. I would recommend you guys to anyone selling looking for fair market prices." - Jason S.