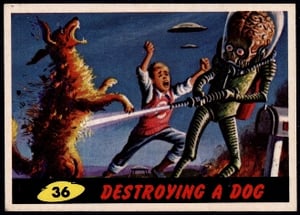 Where Did They Come From

After Gum, Inc. issued the propaganda-laden "Horrors of War" in 1938, and after several other war and military releases from various manufacturers over the following decades, Topps released a fictional alien attack in 1962 with Mars Attacks!

One of the most popular non-sport releases ever, Mars Attacks! cards are at the top of most non-sport collection want lists and high condition, professionally graded examples can sell for thousands of dollars.

The collection comes to us after decades of being in storage.  Collected when issued in 1962, the cards were put away in a small box for more than 5 decades!

Stashed away and out of view by an aunt, the collection came to be known by her nieces and nephews shortly after the aunt passed away.  Splitting the collection was one option, but since none of the nieces or nephews could make a complete set, they decided to each explore different ways of selling the collection.  They checked with other card dealers, auction houses and considered eBaying the cards.

One of the nephew's wives contacted Just Collect and began the process of having the cards evaluated and appraised.  After a preliminary evaluation and conditional purchase offer, the family members agreed to send the collection to Just Collect's Somerset, NJ office via our FREE FedEx Shipping Program for a no-obligation in-person inspection.  Upon review and analysis by our vintage card specialist, Just Collect prepared a complete evaluation and aggressive purchase offer to the family.  They compared the Just Collect offer to their other offers and options and chose to sell the collection to Just Collect for the highest priced offer.

Non-Sports cards have had their share of controversy over the last century or so. From GUM, Inc's propaganda-laden 1938 "Horrors of War" and Bowman's 1951 "The Red Menace" to the horror and cowboy/Indians cards produced in the 1950's, there have been children that have loved them and parents that have despised them.

The Mars Attacks trading card series was created by Topps in 1962. Developed by Len Brown, he was inspired by Wally Wood's cover for EC Comics' Weird Science #16 and they form a story arc, which tells of the invasion of Earth by Martians. Brown discussed the idea to executive Woody Gelman and they created the story. Topps then enlisted Wood to provide the sketches and hired Bob Powell to complete them with Norman Saunders painting the final artwork for 55-card set.

Mars Attacks created a ton of controversy upon its release. Many of the cards feature gore that was extreme for the period and included futuristic battle scenes and bizarre methods of Martian attack, torture and slaughter as Martian forces attempt to conquer and colonize Earth. The story concludes with an expeditionary force of humans volunteering to embark on a counterattack on Mars, in which the Earth force attacks the Martians on their own planet. This necessitates the Martian invasion troops to be recalled from Earth to defend Mars. The Earth attack forces, after destroying the Martian cities and killing the Martians, depart just before Mars is destroyed a cataclysmic explosion, ensuring peace and safety on Earth as the Martian has been exterminated.

The cards, which sold for a nickel per pack of five, were test marketed by Topps through Bubbles, Inc. under the name "Attack from Space." Sales were sufficient to expand the marketing and the name was changed to Mars Attacks. 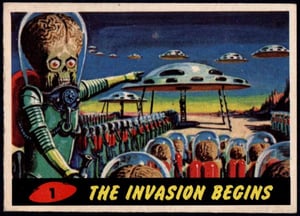 At the time of issue, many complained that the cards were too extreme. One particularly controversial card depicts an alien blasting a helpless dog with a ray gun. While kids ate them up, teachers and parents were outraged at the graphic violence and subliminal sexuality. Topps even agreed to redo the artwork to subdue 13 of the cards, however, after inquiries from a Connecticut district attorney, Topps ceased production of the series altogether before the replacements could be printed.

1962 Topps Mars Attacks has a total of 55 cards. As with most sets from the era, the first and last cards carry a premium as they were often the ones to get the most wear and tear. The final card in the set is also the set's checklist. Unmarked copies are very tough to come by today. This collection contained five #55 Checklists including two that were unmarked (see the reverse of the checklist card below on the right! 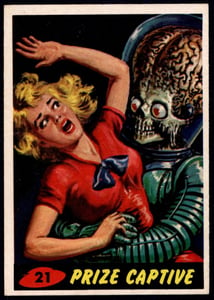 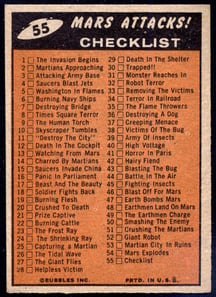 Just Collect is one of the most aggressive and active buyers of non-sport cards in the world and is always looking to purchase collections of most pre-1980 non-sports card issues.  We are looking to buy these sets in most conditions, ranging from Good to Mint! Even if you don't have complete sets, we are also buying partial sets, singles and high condition commons. The singles with the most value will be the first and last card of each set, along with any checklists or high series cards. Additionally, there are three cards in the non-sports arena that hold tremendous value, that we buy in ANY condition: 1932 U.S. Caramel Presidents #24 William McKinley, 1952 Topps Look 'N See #82 Rembrandt, and 1959 Fleer The 3 Stooges #1 Curly.