Michael Jordan and Other Modern Icons

Rookies and Stars Collected from Shops to Shows

How do you collect? Do you buy complete sets? Do you buy select singles? Do you build your collection from buying wax packs or other people's collections? Do you buy on the Internet, from eBay, from catalogs, at card shows or from the local card shop? At some point, you've probably explored at least one, if not most of these card buying and collection building options.

Recently, we had a young gentleman contact that had grown up in the Washington, DC area. He had a collection that he had built from going to card shops and card shows throughout his youth. Like so many people active in the hobby, he grew up watching hobby icons of the 1980's and early 1990's like Michael Jordan, Jerry Rice and John Elway. His passion, it appears was basketball and football and he was pinpoint on his focus. He collected who and what he liked and it shows in his collection.

The gentleman's collecting focus has changed from collecting cardboard images of his boyhood heroes to collecting vintage sneakers (or tennis shoes for those not on the east coast).  We met with him, evaluated the collection and made an offer that he was happy to accept and use toward advancing his new collecting attentions. 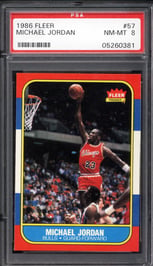 The obvious highlight of the collection was a lovely Michael Jordan 1986 Fleer rookie card graded PSA 8 NM-MT by Professional Sports Authenticators. This card is currently available for auction from Just Collect on eBay and ends this Sunday evening (Feb 14th) and can be viewed by clicking here.  Jordan wasn't the only card from the 1986 Fleer Basketball Set that was included in this collection.  Other Hall of Fame rookie cards from this iconic issue included Charles Barkely, Karl Malone, Patrick Ewing, Hakeem Olajuwon, Chris Mullin, Joe Dumars, Clyde Drexler, Isiah Thomas as well as cards of established stars that were also featured in the set like Kareem Abdul-Jabbar, Larry Bird, Magic Johnson, Julius Erving and James Worthy.

There was also a complete run of the 11 card sticker set which also featured another Michael Jordan card.  However, the run of basketball stars and rookies didn't begin and end with the 1986 Fleer cards.  There was a 1980-81 Topps Larry Bird/Julius Erving/Magic Johnson rookie card and a series of 1980's through 1990's Fleer and Finest rookie cards of many of the great names we watched, and are still watching in some cases.  Names like Dennis Rodman, John Stockton, Reggie Miller, Scottie Pippen and Mark Price from 1988 Fleer.  Finest offered the likes of Chris Webber and Anfernee Hardaway in 1993, Jason Kidd and Grant Hill in 1994 and Kevin Garnett in 1995.  In 1996, Finest rolled out Ray Allen, Allen Iverson and Kobe Bryant and followed that with Tim Duncan and Tracy McGrady in 1997. 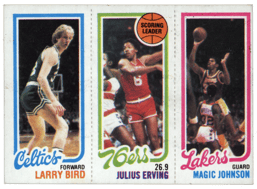 Recent additions to the Hall of Fame are not overlooked as Ken Griffey, Jr. makes an appearance on his 1989 Upper Deck #1 card. The initial foray into the hobby by premium card manufacutrer Upper Deck, Griffey has long been held as the standard of the change to premium cards and his #1 card in the Upper Deck issue is a significant reason for the acceptance of the upscale change in card stock and manufacturing techniques.

We are always looking for vintage sets and collections, so if you have a collection that you are interested in selling, contact us today to and we'll provide you with a free appraisal and can make you a cash offer on the entire collection. We also travel to buy more extensive collections.