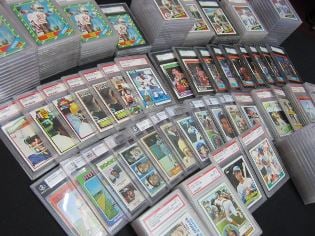 Just Collect has spent the past decade advertising and reminding everyone that we buy vintage cards from 1879 to 1979. It has become the closing tagline for almost all of our blog videos and has been a major part of our print and media advertising. One of the interesting aspects of having been in business for more than a decade is that some of what may have been modern is no longer truly modern . . . and in many cases, they are cards that we are now interested in buying!

We have been finding that we are more likely to be interested in and be willing to buy collections that feature cards from the 1980's, 1990's and even well into the 2000's. We've found ourselves even getting excited about collections that feature primarily current day players like Mike Trout, Lebron James, Andrew Luck, Bryce Harper, Sidney Crosby and Clayton Kershaw.

Despite many issues being overproduced over the past few decades, rookie cards of premier Hall of Fame players are always of great interest to us. This is no truer than when a Philadelphia area collector contacted us awhile back with a 1986 Fleer Michael Jordan rookie card and some other modern rookies rookies that he was looking to sell. We were able to reach agreement on a price to purchase the collection that he brought and he mentioned that he had a lot more cards. Last week, he contacted us to ask if we'd have interest in another portion of his collection that was predominantly football rookie cards from the 1980's, including a few hundred PSA, BGS and SGC graded cards and another hundred or so ungraded. We agreed, secluded an appointment and when he arrived, he had a large assortment of the major players from the era in some staggering quantities.

When you look at a significant collection of 1980's material, you expect to find the usual piles of Joe Charboneau, Eric Davis, Sam Horn and Phil Nevin cards (or 5 monster boxes of Marc Newfield if you look in my storage unit). You don't expect to find dozens, yes, literally dozens of both Dan Marino and John Elway Topps rookies. But it wasn't just football; there were double digits quantities of rookies of Cal Ripken, Tony Gwynn, Barry Sanders, Troy Aikman, Scottie Pippen, John Stockton as well as smaller counts on rookie cards of Mike Schmidt, Ken Griffey, Paul Molitor, Eddie Murray, Robin Yount, George Brett and Rickey Henderson and all of the key rookies from 1986 Fleer Basketball (we had purchased the Michael Jordan previously). The collection also included some valuable non-rookie cards of stars like Michael Jordan, George Blanda, Kenny Stabler, Johnny Unitas, Hank Aaron, Willie Mays and Al Kaline.

So, if you think that dozens of Elway and Marino rookies are impressive, there were nearly one hundred 1986 Topps Jerry Rice rookie cards with more than half of them being PSA, BGS and SGC graded. I used to joke that rice was good when you were really hungry and wanted to eat hundreds of something. This Rice hoard was something that I had a hard time digesting. It was an impressive lot and one of the larger collections of Rice rookies that I've seen since the latter portion of the 1980's before Rice became the greatest wide receiver in the history of professional football and his card prices went from a dollar or two to $20, $30, $50 and more.

After evaluating the lot, we were able to reach an agreement with the seller and bought this portion of his collection and we are quite pleased and very proud to share the collection with you and make you aware that we are also buying modern cards. Due to the quantities of some of the cards, it may take awhile to present everything to you, but here are a few cards from the collection that we've already listed on eBay and many more will follow in the coming weeks.  You can check out the Ken Griffey rookie we just listed as well as all of our current eBay auctions.

So, yes, we are interested in buying select modern cards.  This includes most rookie cards from 1980 to the present and would include such stars as:  Wayne Gretzky, Kobe Bryant, Lebron James, Cal Ripken, Michael Jordan, Mario Lemieux, Joe Montanta, John Elway, Mike Trout, Derek Jeter, Peyton Manning, Patrick Roy and many, many others!  Please, call or email if you have cards you are interested in selling.

If you have a collection, vintage or modern, that you are interested in getting appraised, please contact us. We will provide you with our industry leading purchase offer. Like so many others that have contacted us, you will be pleased with our service, our expertise and prompt, professional manner.

Below is a brief video showing just some of the graded cards that were included in the collection: