About a month ago, I had the opportunity to meet up with a young couple from New York. They were getting ready to tie the knot, and were looking for some extra cash to help out with their wedding expenses. They had recently found a few vintage baseball cards which they thought had value - and to be honest, so did we. Although the collection was really small, it was jam packed with Hall of Famers Ted Williams, Joe DiMaggio, and Hank Greenberg. The cards were from the 1939 Play Ball set - one of the best sets known to the hobby!

They had described the condition of the cards over the phone to us, and we had determined that based on what they said, they were in about EX condition - which is great for cards that are over 75 years old! Now we don't usually go see a collection without seeing the images first, but we made an exception this time, because they were just a short ferry trip away across the Hudson.

After I got to New York, I had a quick "how you doing" chat with the couple, and then we dove into this unique collection. However, within about five seconds, I noticed a glaring issue with every single card, and my heart sank. Every card was riddled with tape residue, bring the condition down 4 notches, from mid to low grade! I couldn't believe it! Before seeing the collection, I was really excited for the couple, because these cards would have netted them a few thousand bucks, and could have put a nice dent into the wedding bill. However, based on the condition, the cards were barely worth a grand. The immediately saw the shock and disappointment on my face, and knew something wasn't right. I explained the issue to them, which they had overlooked (as most people would), and then gentleman went on to tell me about how they were his grandfathers cards who had them affixed to some type of display - thus creating the tape residue. At the point, all of us were disappointed. Stupid tape!

I had then suggested that they just keep the cards because of the possible sentimental value, and maybe they could pass down to their kids one day. So we chatted for a while, discussing all possibilities, and they finally came to a decision to sell the cards anyway, because they really had no interest or use for them. It's just unfortunate that they weren't worth more. We ended up buying the collection, and at the end of the day, the couple actually was happy, because this was new found money for them. 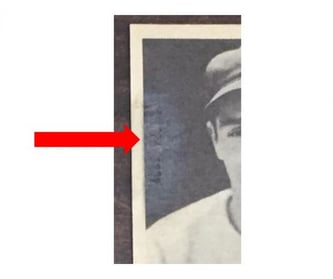