My mom threw out my cards more than 35 years ago. To this day, I still find it hard to think about it without a return of that uneasy feeling that I experienced when I first saw my empty closet. I really don't like to think of how many Mantle, Koufax, Clemente cards that I collected and older ones that were given to me are gone forever, decomposed in a landfill somewhere in the swamps of Jersey. But enough of my tale of woe as this is a story of a collection that was started before my mother's mother was even born and that no one threw away.

Back in the very early 1900's, Cincinnati's Fan Craze Company produced two sets of game cards featuring baseball players from the American League and National League. The American League players were issued in 1904 and featured black and white images of the players on cards that are reminiscent of a deck of playing cards. Measuring approximately 2-1/2" by 3-1/2" with rounded edges like a deck of cards, players appeared on the obverse in an oval that included the players' name and team beneath the image. These table game cards include baseball plays above the images. Game plays like "Strike," "Hit by pitcher," "3-base Hit," "Double play" and "Home run" were printed above the player images. Two years later, in 1906, Fan Craze issued a National League players set.

Just before the end of the first decade of the 20th Century, the American Tobacco Company began issuing small baseball cards as premiums in their tobacco products. These small cards, later identified by card collecting pioneer Jefferson Burdick in the American Card Catalog as T206, were produced with various advertising backs from 1909 through 1911 and consisted of hundreds of different players from the Major Leagues and several minor leagues. Advertising backs featured many of American Tobacco Companies top brands, including Sweet Caporal, Piedmont, El Principe de Gales, Polar Bear, American Beauties, Tolstoi, Carolina Brights, Uzit and many others. The complete set consists of 524 cards, including the historic Honus Wagner card that has sold for as much as $2.8 MILLION!

A gentleman contacted our office inquiring about a collection of tobacco cards that his father had received from his father and that he was interested in getting appraised and perhaps receiving a purchase offer. We contacted him and he mentioned that he was in eastern Pennsylvania and that he and his buddy were checking around with a few national companies that buy vintage cards. We discussed his collection and agreed that it would be of interest to us and provided a worst case, ballpark figure from the initial description of the material. He said that it sounded reasonable and we scheduled an appointment in our Somerset, NJ office later that afternoon. 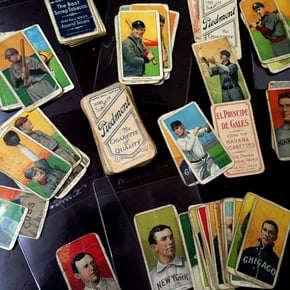 I met with the college-aged man and his friend and we talked about how he got the collection from his father nearly a decade earlier and that the cards had been passed down to his father before that. He had taken the time to separate the collection, which consisted of about 90-100 1909-1911 T206 cards (divided by advertising backs), about a dozen 1911 T205 Gold Borders and about 40 1904 Fan Craze American League player cards. Sadly, the Fan Craze cards had been trimmed dramatically and had been glued into an album and then removed at some point over the last 100 or more years. The tobacco cards, while not trimmed or glued, also were well loved and presented in lesser condition. We reviewed the cards, the advertising backs, the overall condition, and discussed some of the players that have more expensive variations in the set. As we discussed the T206's, I noted that there were a few Hall of Fame players in the collection, albeit only 2 in the T206 and about a half dozen or so in the Fan Craze collection and provided a valuation of the approximate retail value based upon condition.

We concluded the discussion with our purchase offer and the young man mentioned that he had another appointment to show the cards to and I encouraged him to take his time and if he wanted to show them to another dealer, I was confident in our offer. He appreciated that there was no hard sell or take-it-or-leave-it offer. We shook hands and he said that he would let me know either way.

Maybe about a half-hour later, the young man called our office and said that he spoke with the other company that he was planning to meet and felt that the other buyer wasn't going to come close to our offer and asked if he could come back and accept our offer. We agreed, he arrived a short time later and we verified the contents of the collection were intact, completed the deal and paid the man on the spot!

Here's the young man's story in his own words:

"About 8 years ago, I found a box of old baseball cards in my dad's office and asked if I could keep them. He said, 'Okay.'

After I got older and gained more knowledge about baseball cards, the cards became much greater interest to me. I knew I was sitting on some value and wanted to cash in on it. After searching the Internet for respected buyers who may be interested, I came across several, including Just Collect. I contacted them and they were really interested and invited me to their office. They gave me a free appraisal of my cards and offered me a deal that I felt was more than fair and even said that I could think about it or shop the cards around as they were confident that there offer would be best. Their offer was the best, they treated me great and had a huge amount of knowledge of what they were talking about and everything was really smooth and easy. I will definitely come to them again when I have more cards to sell."     Anthony – PA

Just Collect is always looking for vintage sets and collections at market leading buy prices, so if you have a collection that you are interested in selling, contact us today to and we'll provide you with a free appraisal and can make you a cash offer on the entire collection. We also travel to buy more extensive collections.