Some things are hard part with. Like your favorite childhood toy, a family heirloom, or even an old car that you spent years restoring. But there's a point in many of our lives that we decide it's time to sell and then move on - and there's no shame in that. A family heirloom can be anything of sentimental value - from a diamond ring to an old piece of furniture to a painting - and anything in between. In this case, that family heirloom happens to be a bible, and hidden inside of it was some baseball card treasure!We were contacted by a woman in Florida who had inherited her great-great uncle’s bible…a family heirloom that has been around for generations. When she finally had a chance to sit down and look through the bible, she was shocked to find three vintage baseball cards, being used as bookmarks. After the initial shock wore off, she realized how old these tobacco cards actually were, and she decided she better figure out if they are worth some money. You don't need to be a card expert to realize they weren't in mint condition, but the cards were over 100 years old, so she gave us a call to find out some more information.

So, that begs the question…what three cards could she possibly have, that sparked our interest enough to give her a free appraisal, free overnight shipping, and a purchase offer? Well, she had three baseball cards from the ultra-rare, 1914 Fatima Player Cards Tobacco set! Most people don't even know this set exists. When collectors think "Fatima", the popular team cards come to mind. But no, these were in fact from the 1914 T222 set. And they weren't just any cards... she had the short-printed Walter Johnson!

It Ain’t Pretty, But It's Rare

Do you know how rare this card is? It's rarer than the T206 Honus Wagner card. More rare than a 1915 Cracker Jack Shoeless Joe Jackson. Harder to find than a NM/MT Mickey Mantle rookie card. There's only 19 copies of this 1914 Fatima Walter Johnson card in existence (based on PSA & SGC population reports), and The Big Train just so happens to be one of the best pitchers to ever play the game (400+ Wins, 3500+ Strikeouts). Even though it’s not in pristine condition, it's still worth thousands of dollars due to the fact it's 100+ years old, it's a short print from a tough set, and he's a Hall of Famer that's at the top of every collector's want list. Also interesting to note is it would be virtually impossible to complete this set if you started it now. It’s just that rare. There's only two people in the entire world who have completed a full set, and the next closest collector is still 30% of the way from being done. I'm going to go out on a limb here and say that collector will be unlikely to complete the set…but I would love to be proved wrong. So, if you are that guy, or another collector who maybe collects the set raw, and you find yourself close to completion, we absolutely need to talk. How much could a full set be worth? It’s so hard to tell because they are so scarce, but if I had to guess, I’d estimate a low to mid-grade set being worth $50,000+.

The other two cards in the collection are worth mentioning as well. They are examples of Ray Morgan and Art Fletcher. The Ray Morgan is also a short-printed card, so it has some value. Art Fletcher, who was a really good hitter for New York Giants, is also desirable, due to the fact he played for New York. As you can tell, these two cards are not in the best of shape either, but it's more about the story behind the cards. The real value is in the Walter Johnson card - which is why we bought this small collection. I think the story behind these cards is remarkable, that they somehow survived over 100 years and now have re-surfaced. I also love the fact that this woman who sold us the cards lives over 1,000 away in Florida, and she contacted us. Then she felt comfortable enough to mail these family heirlooms to us without even knowing exactly how much they were worth. That's pretty good in my opinion, given the endless routes she could have taken this day in age with the internet or visited a local card shop.

Seriously though, who uses valuable baseball cards as bookmarks?! And is the bible really a book that you need a bookmark for?? Well,I guess that's a discussion we can have another day. 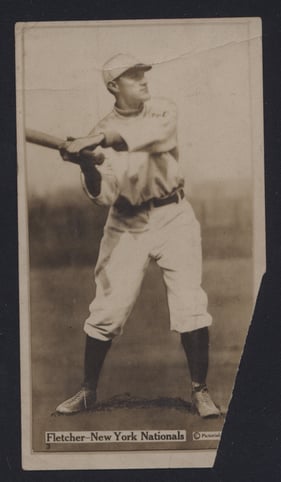 And no, we did not purchase the bible.