Forgotten but not Lost

When it comes to hundred-year-old baseball cards, even the most worn, torn, and "well-loved" examples can command solid value.

At the end of April, a gentleman named Michael from Illinois contacted us through our website looking to sell a collection of about 100 T205 and T206 tobacco cards from 1909 to 1911.

Years ago, Michael worked for The Sporting News, a sports website and former print magazine founded way back in 1886. The publication became so well known for covering baseball that it received the distinction, "The Bible of Baseball."

Back in the late 80's he attended a Sporting News holiday party charity auction in which the cards came up for sale. Unfortunately, they had all been taped to poster board and therefore the general consensus at the time was that they had little to no value.

Nevertheless, Michael took interest in the cards and bought the three posters of cards for a whopping $15. He then placed the posters in large envelopes and tucked them away in his art studio. 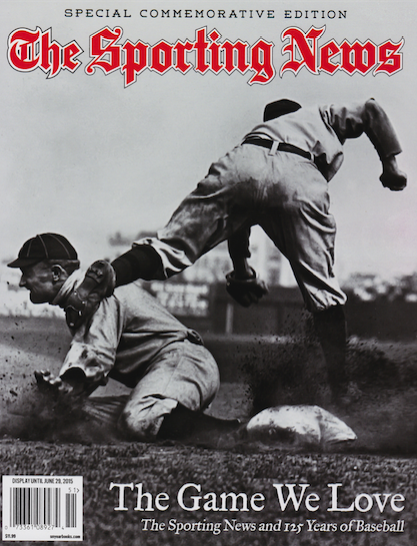 A 2015 commemorative edition of The Sporting News

Twenty years later, he rediscovered the cards while cleaning out his space. By then, the tape had withered away and the cards had fallen off of the poster boards.

He gathered the cards, placed them in a drawer, and proceeded to forget about them again for another 8 years.

Finally, after some encouragement from his wife, he researched the cards and their value. After doing his homework, he decided to sell. Some of his sports collector friends recommended us --- and we are definitely glad that they did.

We paid to ship the cards to our New Jersey headquarters and evaluated the condition. We made Michael an offer and he quickly accepted. Here's what he had to say about the interaction:

"[Contacting Just Collect] was the best decision I made in the whole process. They explained the process of assessing my collection and told me that they would give me a retail value of the cards and, if I was interested, they would make me an offer to purchase the cards outright for a percent of the retail value. Just Collect has my absolute recommendation. Totally professional, honest, and forthright."

Because of the damage that resulted from the use of the tape, the cards fall into the poor condition range. However, given the popularity of the T205 and T206 sets, along with the fact that this particular collection contained numerous Hall of Famers, these cards are still desirable to many pre-war collectors.

Some of the Hall of Famers in the collection include:

Had this collection featured all 524 cards in the T206 set --- and instead of Poor condition, the cards were Near Mint or better --- we would have paid at least $750,000 for it! Curious what we'll offer for different sets? Check out our full set buy price list.

This isn't the first T206 collection we've purchased. About two years ago, we acquired an amazing group of sports cards that we dubbed The Volunteer Collection. That unbelievable group featured not only hundreds of T206s, but also 1915 Cracker Jacks, 1913 Fatima team cards, 1933 Goudeys,1955 Topps and more. Check our blog post about that amazing find here.

Interested in buying some of these little pieces of history? They'll be going up for auction right here on our ebay store tomorrow night, Thursday, May 12th, 2016.