Decades ago, the search for that elusive item for your collection or the final card for a set that you've been working on used to mean waiting for a major card show in your area. In the 1990's, the Internet hastened these long waits and countless hours of driving and searching at card conventions by opening the world up so that collectors could find, buy and subsequently fill so many holes in their collections.

But what do you do when you're looking to sell? Where do you go when the cards shops are all closed, the card shows have become scarce and you don't want to be bothered selling on your own on eBay? You use the Internet just like a father and son tandem from the Orlando, Florida area. They began collecting long before the Internet, but used the Internet to help find options to sell one of their prized accomplishments, a complete 1960 Topps Baseball Set. They used Google to search for buyers and found several, including Just Collect. With a little research, they noticed that we had recently purchased a 1960 PSA Topps Set (similar to one that they were looking to sell) and contacted us via telephone. He explained that he and his father had a complete 1960 Topps Baseball Set with all 572 cards PSA 8 NM/MT graded with no qualifiers and that they were interested in selling if they could get their price. The son noted that he already had a price in mind and that he was looking for someone reputable that would be able to pay him a fair price.

The duo began a collection of the 1960 Topps Set because a friend had built several sets and had many duplicates that got them started. They would attend local card shows, purchase from advertisements in trade magazines and buy and trade with local card shop owners.

Over the years, as they collected a wide array of sports cards, they continued to build their 1960 Topps Set, continually upgrading their cards. At some point during the upgrading of the set, they decided that since condition can be extremely subjective, that when they were ready to sell, they might be better served to have the set graded. Rather than submit their entire ungraded set for grading, they decided to build a PSA graded set in straight PSA 8 NM/MT condition. They submitted a few cards on their own, but opted to buy cards that had already been graded. They would buy them at card conventions, from local shops and through the Internet from eBay, auction houses and online stores.

They found many obstacles, just as they experienced building and upgrading their raw set, but also found the challenge to be exciting. Anyone familiar with the 1960 Topps Set knows that there are quite a few cards in the set that are incredibly difficult to find in high grade. Card #451 Curt Simmons, is probably the toughest of the commons to find in PSA 8 NM/MT condition and often sells for close to $1000 when offered for sale. Several other tough common cards to find in high-grade are #33 Tom Morgan, #116 Jim Rivera, #223 Danny Murtaugh and #446 Ellis Burton. These "commons" usually sell for over $300 each in PSA 8.

The condition scarcities and tough to locate cards were not lost on the son or his father. They knew the value of the collection and with the recent escalation in high grade cards, felt that now was the time to sell. As we noted in our blog story about the previous 1960 Topps purchase, many people send their collections to us for evaluation. While we were able to assess and value their 1960 Topps Set because it was all PSA 8 graded, and agree upon a purchase price, the father and son were not comfortable sending it through the mail for fear of loss or damage. We discussed several options and eventually agreed upon a date to meet them in Florida and scheduled a BUYING TRIP around our travel to the Orlando area to purchase the collection in person. The son met with us and we concluded the sale and were very pleased that the son noted,

"We appreciate your professionalism, fairness and willingness to come to meet us. You (Just Collect) offered us the best price and incredible communication and service. It was a joy building this set and we hope that others find happiness in filling out their sets with these cards. We would use Just Collect again without hesitation."

The 1960 Topps Baseball Set may be somewhat limited in the volume of high value rookie cards, but it boasts an astounding total of 38 Hall of Famers on regular issue cards. The two most significant rookies that you will find are also the only Hall of Fame rookies in the set. Carl Yastrzemski debuts on card #148 in the Sport Magazine 1960 Rookie Stars subset and is the bane of many high end collectors because of the propensity for black printing smudges in the orange background (PSA 9 MINT cards of Yastrzemski have sold for over $20,000 several times in the past year). Additionally, Willie McCovey appears on his initial Topps card #316 in the Topps All-Rookie Team subset (McCovey has sold for over $5000 in PSA 9 MINT condition). Another borderline Hall of Fame candidate, Jim Kaat, also has his rookie card in the All-Rookie series. 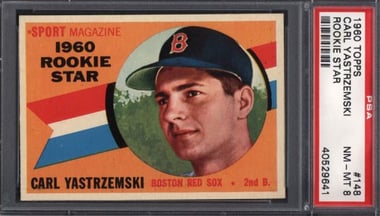 As is the case with most Topps Sets since his first appearance on card #311 in the 1952 Topps Baseball Set, Mickey Mantle is usually the most valuable card in the set. Although Mickey appears on several cards in the set, card #350 is the staple. This base card has sold for over $5000 in PSA 8 the past several months and has topped $30,000 in PSA 9!

We are always buying vintage singles and sets, both graded and ungraded. Give us a call today to find out what your collection is worth! We provide free appraisals on all vintage collections, and can make you an offer within 24 hours! If you have an extremely large or valuable collection, we can offer free, fully insured FedEx shipping or travel to you.