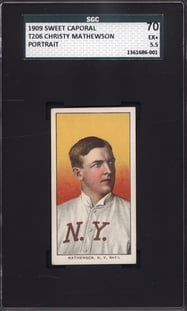 In the late 1890’s the National League had an image problem, with many of its top players spending more time in saloons than on the playing field. The players seemed to exemplify a rough and tumble age and their carousing threatened the very existence of the game. In 1900 a 19-year-old Christy Mathewson entered this tumult and with his college education, excellent manners, and religious beliefs, he gave baseball a more wholesome image and became the idol of his age. Presented here is a stunning 105-year-old T206 portrait of 'The Christian Gentleman' in the prime of his career for the New York Giants that is graded conservatively an SGC 70 (5.5) EX+.

During the 17 seasons that Matty pitched no player was more universally respected and loved, and as a result a high value is placed upon his baseball cards nearly 90 years after his untimely death from tuberculosis that resulted from poison gas inhalation during his service in World War One. Mathewson set the NL record with 373 career wins and led his Giants to his four World Series. In 1905 he recorded the greatest performance in World Series history when he pitched 3 complete game shutout victories against the Philadelphia Athletics. In 1936 he became the first pitcher elected to baseball's Hall of Fame.

Given Mathewson's popularity during the trading card boom that existed during the early twentieth century, it is no wonder that he appears in almost every set manufactured during the era. However, no set is more widely known and collected than the T206 tobacco card set issued in three series between 1909 and 1911 and expectedly this has become one of his most popular cards. Mathewson is featured on three distinct poses in the landmark set, but his Portrait is the most popular of the three and therefore carries a premium over the Dark Cap and White Cap poses. 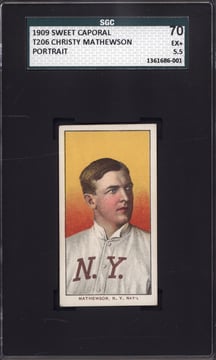 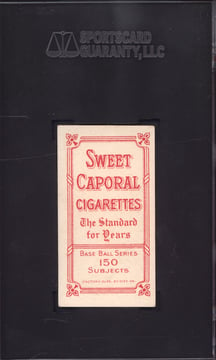 This example of Christy Mathewson's T206 Portrait is from the 150 series issued in 1909, when the 28-year-old ace would post a 25-6 record and lead the league with a miniscule 1.14 ERA. The card still carries with it the vibrant colors and clarity from when it first emerged from a pack of Sweet Caporal cigarettes more than a century ago. It is exceptionally well centered, and other than light wear to the left corners it is free of other flaws and has no wrinkles nor stains that often plague cards in the T206 set.

This T206 Portrait captures Matty in his idyllic best, as a true hero, before the ravages of life would wear him down and ultimately take his life. The excellent condition speaks to how this card was cherished by its original owner and those that have had the honor of holding it in their collection for the last century. Do not miss your opportunity to be the next owner of this coveted T206 gem.  We are always buying T206 cards and other vintage baseball sets.