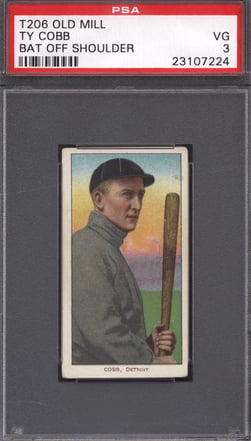 A few years ago, a chatter named “Sparty”, in the Baseball Almanac Forum, stated that if baseball cards had a Mount Rushmore, all four of the Ty Cobb T206 tobacco cards would occupy the monument. The T206s have previously been called the king of the card collecting mountain, and are avidly desired, wanted, and craved by collectors worldwide. Honus Wagner, Walter Johnson, Christy Mathewson, Cy Young and the Georgia Peach, among so many other icons of the game, appear in the set. Cobb was loved for his accomplishments, but hated for his overzealous war hawk competitiveness and combat-style base running. The American Tobacco Company, producers of these cards, knew collectors wanted Cobb cards, and accommodated them with four different variations: two portrait shots, and two “action” cards that have Ty Cobb holding the bat which made him famous. 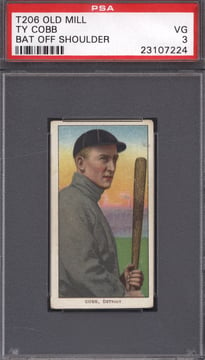 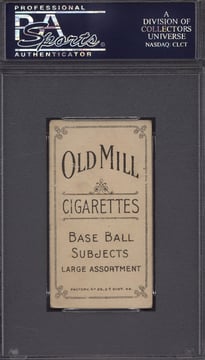 His “bat-off-the-shoulder” variation is somewhat scarcer than the issue with his bat resting on his shoulder, and both batting cards much rarer than his portraits. Cobb is pictured awaiting the pitch, 4,191 of which he swatted for hits to set an all-time record, which stood until Pete Rose finally eclipsed the mark in 1986. Though Tyrus was loathed by some folks from his era, his card is loved in an adoration-like level. The twelve-time American League batting champ eclipsed the .400 batting average threshold three times, and led the Majors in several offensive categories over his 21 year playing career. The only thing lacking for him was a world championship. Love him or hate him, you can’t argue with success. The card shown displays the Old Mill Cigarette advertisement back, and can be traced to the 350 card series issued in 1910. American Tobacco Co. distributed a reported 15 different brands of cigarettes, and these cards only came in the representative packs of the smokes. No mail order, no redemption coupons. The Old Mill brand, while not the scarcest, definitely falls in the "challenge-to-find" variety. A glance at the PSA population report indicates that only 16 of the Peach’s Old Mill advertising placards exist in graded condition. A scant four exceed the PSA 3 grade earned by the example presented here.  While many, many T206’s are available for sale at shows and or posted via on-line outlets, examples like this one do not show up very often. You can make this tremendous T206 Ty Cobb card part of your card collection now.