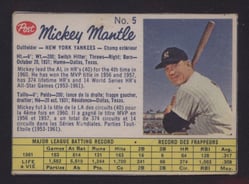 I was discussing this recent acquisition of a near complete set of 1962 Post Cereal Canadian baseball cards with one of our employees, Bill, this morning, over my morning orange juice and a granola bar. Bill is nearing a milestone birthday this year, but transformed immediately into an 8 year old kid of the early 1960’s , with bright eyes and enthusiasm of a boy in love with baseball and cereal-issued baseball cards, immediately after I said the words “Post Cereal 1962 cards.” Post Toasties, Oat Flakes, Grape Nuts, oh, how my brothers and I drove Mom crazy EVERY morning, asking her to go back to the grocery store to get more cereal so we could get more cards”! Bill stated.    An ad for the “Free” baseball cards appeared on the front of the boxes, featuring a picture of a player, often Mays, or Mantle, while panels of up to seven cards were printed on the box. Smaller boxes, of course, counted fewer cards on their backs. 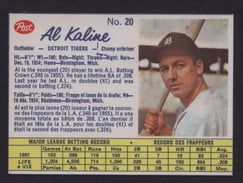 Unlike its American cousins of Post Cereal cards issued in all three years, a unique twist to distribution of the Canadian versions were that some cards were actually available INSIDE certain boxes, in perforated panels, much like the American mail in offer for cards directly from the factory.  This added option makes the perforated another challenging rarity among a set full of rarities.

The seller from Canada reported that he collected each and every one of these cereal premiums by eating his breakfast and cutting the cards off the cereal boxes. “These cards were something that made me eat a lot of post Cereal when I was 11 years old.  My parents were extremely patient with me as I would search through the cereal boxes at the grocery store to make sure we got a box with players on it that I didn’t already have.  I believe my Mom and Dad probably ate some cereals that they did not like that much as well in order that I could collect different cards”, he stated.  “Fortunately, my dear Mother was smart enough to keep some of my childhood collections and it wasn’t until about 4 years ago I decided to go through the old record player case that was the safe haven for my childhood collections.  “I was going to throw them into a recycle bin, but decided to put them in a binder to show my friends…[and] decided to look online to check to see if there was any interest in these Canadian Post Cereal cards.  That is how I happened to find Just Collect." “I really believed that our next Canadian purchase  would have included some of the Parkhurst or Topps hockey sets from the 1950’s and 1960’s, O-Pee-Chee hockey cards from the 1960’s and 1970’s, or even some of the tough O-Pee-Chee baseball cards from the 60’s and 70’s…, long before getting our hands on ’62 Post Canadians.”

Nonetheless, the collection of Post Cereal Canadians is a great one, and one we are always looking to buy. Post was one of the “Big Three” cereal makers in that era and issued baseball and football cards from 1960 through 1963.  Their 1960 oversize cards contained only nine cards, made up of five baseball, two football and two basketball players.  The 1961 through 1963 baseball sets, grew to 200 individual cards, but several errors (corrected and uncorrected) and variations exist making the total number for master sets much higher. Like Bill and his brothers, there are thousands of “Baby Boom” kids from Canada who woke up each morning to pour a bowl of Post Toasties Corn Flakes, Alpha-Bits and Sugar Crisps to empty the box and cut out their favorite Major League players for their collection.  Unfortunately for our northern neighbors, distribution was leaner than in the USA, and a smaller opportunity to “Collect them all” availed itself for card collecting in the Dominion. The red and white Post logo appears in the upper left corner of the card, the player name in script lettering centered on the left side, the card number in the upper center, with the player’s color photo dominating the right side of the card.  A short biographical section appears on the left, in both English and French.  The player’s 1961 and lifetime statistics are printed across the length of the bottom in black over a yellow background. Hall of Famers abound, with the likes of Mickey Mantle, Willie Mays, Hank Aaron, among others.  The cards were issued on the back of the Post cereal boxes, and there were a variety of box sizes, ranging from large 14 ounce containers, 12 ounces, 10 ounces and down to “snack size” 8 ounce boxes.  With 16 different brands of cereal, players printed on the boxes of less popular brands or flavors provide a significantly high number of short prints and scarcer cards from the only Post set printed in Canada.  Post did, however, issue Canadian Football League sets in 1962 and 1963, but only one baseball set.

Our purchase of this attractive and scarce collection from Canada consists of 159 of the 200 cards, and includes both Mantle’s #5 “163 hits/”4th time in 1960” variation, Roger Maris, #6, with his “Residence”/small “p” in pour le circuit French bio variation, Card # 9 Whitey Ford in the rare, corrected  New York Yankees version (he was also erroneously issued as a “Los Angeles Dodger”). The  Ford correction presents a higher market value than the error today.  Interestingly, Post used a gray colored cardboard for most of their cereal boxes in 1962, but also used a white cardboard in some production runs of the boxes, creating yet another variation in the set with white-backed versions. The horizontal format, many errors and variations, gray and white backs and short prints make this one a delightful challenge for collectors chasing the set. 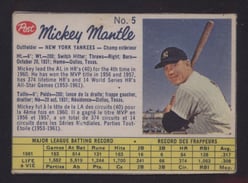 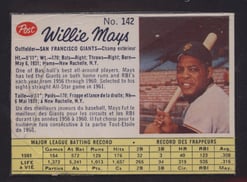 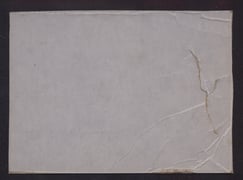 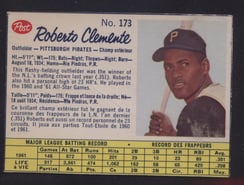 We received no less than 28 are of Hall of Famers in this transaction, with the “White Back” #142 Willie Mays a highlight.  Al Kaline (#20), Sandy Koufax (#109) and Roberto Clemente (#173) are a few of the Cooperstown elite featured in this group.  Luminaries from 1962 like Gil Hodges, Minnie Minoso and Roy Sievers are also in this group, and a “stack” of Short Prints, such as #99 Haywood Sullivan, #112 Jim Gilliam and #161 Carl Warwick. While players Sullivan, Gilliam, Warwick or any of the other shorts in this collection did not achieve the on-field statistical success of the Hall of Fame members, their cards in the ’62 Canadian Post Cereals raise them all up to that level… as the market price for these scarcities and rarities demand levels usually reserved for only the legends of the game. “I want to thank Just Collect for your professionalism and attention you gave to my collection of 1962 Post Cereal Baseball cards.  The whole process was very comfortable for me from the time I contacted you, until the offer you made to purchase the cards.  I find this quite impressive that since I am in Canada and was dealing with a company and contact made online!”, the delighted seller stated.  I suspect he was equally delighted that his Post Cereal premiums brought him some extra financial rewards as well as childhood nutrition and enjoyment.  He concluded his testimonial to us by telling us to “Remember EAT POST CEREALS!!!”. Just Collect is always buying 1962 Post Cereal baseball cards, and other vintage baseball and hockey cards from 1879 through 1979.