Just Collect's purchase of two iconic sets from the 1950s 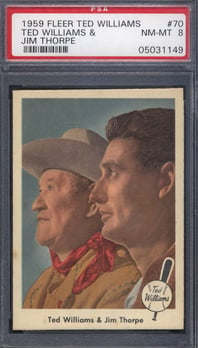 It really is the perfect pair of sets. Ted Williams was an all-American outdoors man; the 1955 Football Set featured all-American athletes. Ted took time away from the game of baseball to serve his country in World War II; a lot of players included in the All-American set also served in war, and one in particular, Nile Kinnicks, died in service and never made it to the professional level. In 1955 Topps lost it's contract with professional football, so they produced a collegiate set; four years later, Topps lost Williams' contract to rival Fleer, who produced an exclusive Ted Williams Set. Both sets contain around the same number of cards, and in this case, both sets are completely graded - all PSA 7's and 8's.  There is even a card in the 1959 Fleer Ted Williams set that features Jim Thorpe! As you can see, there are many parallels between the sets - and we were ecstatic to seamlessly acquire both.

It was probably one the easiest transactions we've ever done. The seller of these two sets had contacted us directly with intent to sell, and provided is with a detailed list of every card in the collection. Being that he is actually a customer of ours, he already knew all about our business and how we operate, which saved us a bunch of time reviewing the process of buying and selling cards. Within a few short days, we received the cards at our office, and then we had an appraisal done within a few hours. It was relatively easy to complete the appraisal process, being that it was only two sets, and they were both completely consistent in grading. I say easy because we usually deal with collectors who come in with ungraded sets and loose cards, which are all over the board in terms of condition, and span across a few decades. Now, don’t get me wrong, I’m not complaining, but I would say it’s 100-times easier when sets are already graded and you know the inventory before hand. He happily accepted our offer, and since he was so impressed with our professionalism and diligence, he has decided to sell us nine more sets!! We couldn't be happier.

Piece of advice: Consistency is a good thing, especially when it comes to set building. Even the most novice collectors know that when collecting cards, condition is everything – and you want to be consistent. Nothing is worse than having a set that ranges from Poor to Near Mint. Not only will the presentation be bad, but it will be extremely difficult to appraise and sell in the future. Knowing what you are looking for, and sticking to your desired condition helps you keep focus, which aids in the process of completion. 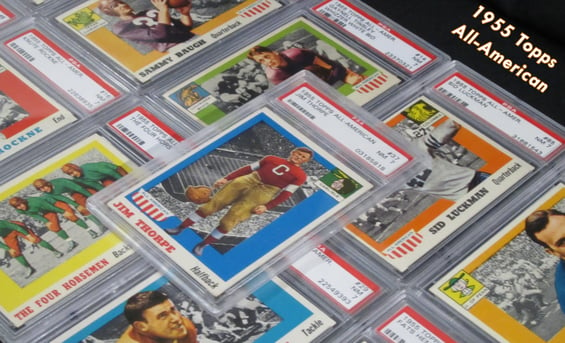 In 1959, Topps was locked out of pro football, while competitor Bowman had exclusive contractual rights to National Football League players. So, Topps produced a 100-card football set which contained some of the greatest collegiate players and coaches to ever step onto the gridiron. The All-American set is one of the most collected sets of the 1950’s, as it features Jim Thorpe, Sammy Baugh, Red Grange, and a plethora of other stars – including the Four Horseman – the one card on every collector’s want list. In terms of aesthetics, the set is absolutely stunning, and is one of my all-time favorites. Each card displays a full color photo of the player, strategically placed on top of a black and white "action" team photo, while all being encased within a vibrant pastel background & border. Each player’s alma mater is also predominantly displayed in the top corner in bold colors. Ok, enough about the looks, let’s get into the actual cards we acquired!

Not only was this a complete set, but it came with about a dozen or so doubles! AND, one of the doubles was a Jim Thorpe! The set was also completely encapsulated by PSA, with all cards receiving PSA 7’s and PSA 8’s. The breakdown was about 15% NM/MT, and 85% Near Mint. A fantastic overall condition for a set that’s 60 years old! The best card in this set was #68, Notre Dame’s Four Horsemen, which was graded PSA 7. There were also PSA 7's of Jim Thorpe,  Red Grange, and Knute Rockne. We recently listed a handful of these cards on eBay, and they have already received a ton of interest from a variety of collectors, investors, and dealers.

Less common, but more unique. I think that perfectly describes this hidden gem from the late 1950’s. Topps did not have a contract with Teddy Ball-Game for the ’59 Season, so Fleer produced an exclusive set. The set contains 80 unique cards, with each one depicting a different part of Ted's life, and career as a ball player. The toughest card in the set is #68, showing Ted Williams with Boston GM Bucky Harris at a contract signing. Well, why is this card so tough? It was actually pulled from production because of Harris' contractual obligations with another company - so, in essence, this is a short print. This card is also extremely tough to find in high-grade, as only about five percent have been graded higher than NM/MT - and zero examples have earned the distinction of PSA 10 GEM MINT. The set we purchased was entirely graded PSA 8 NM/MT, and here's card #68, "Jan. 23, 1959 - Ted Signs For 1959":

As a standard with any vintage set, the first and last card are always tough to find in high grade, as they were usually victims to rubberbands. Here are the two PSA 8 examples from the set we bought, both of which present beautifully, with bold colors, sharp corners, and better-than-average centering: 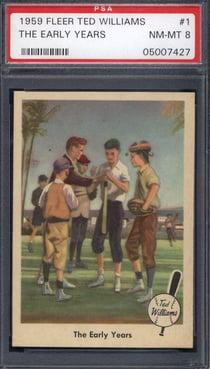 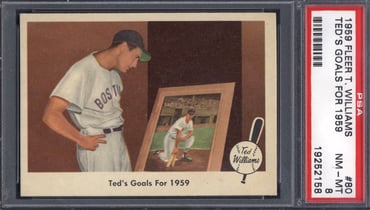 My two favorite cards in the set are card #2 "Ted's Idol - Babe Ruth" & card #54 "Dec. 1954 , Fisherman Ted Hooks a Big One". I like card #2 because it's Ted and Babe Ruth - the two best hitters in the history of baseball - without argument. Card #54 is awesome because it shows a part of Ted's life that everyone wanted to be: the all-American outdoorsman. The man could hunt and fish like no-other. Card #54 shows him on that December day in Peru, where he caught (at the time) the world's 8th largest black marlin - weighing in at 1235 pounds!! Williams' was once quoted saying that there's nothing he rather be doing than fly fishing. Did you know that Ted was inducted into the International Game Fish Association (IGFA) Fishing Hall of Fame? As the back of the card says, "His status in the fishing world is as renowned as his status in the baseball world. Take a look at those two cards that were part of this deal: 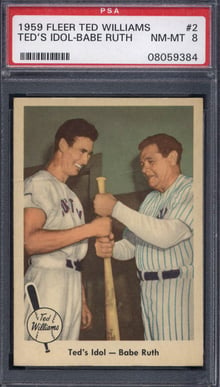 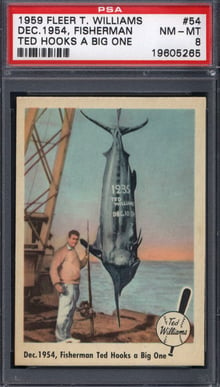 The Splendid Splinter did it all. He was an all-american hero on and off the field. As mentioned earlier, he also served his country as a pilot in the Navy. Fleer did a fantastic job depicting that part of his life: 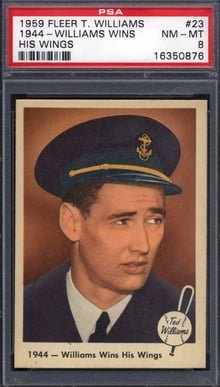 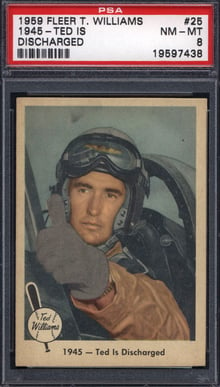 I truly feel that this is one of the most under-rated sets in the entire hobby, and that we were fortunate enough to get an entirely graded PSA 8 NM/MT set. Be sure to check out the individual listings we have up on eBay right now - you won't be disappointed!

Just Collect is always looking to buy vintage graded cards and sets - of all four sports. Do you have a collection, or individual set sale? Contact us today and speak with a specialist to find out what your collection is worth!