After turning 36 recently, I’ve been told a few times by my younger brother and sisters that I’m now considered "vintage."

And by no means did I ever imagine back in 1986, for example, that the 35-cent pack of Topps baseball cards I craved would be considered vintage right alongside me. Life has a way of poking you in the side every once in a while. Here at Just Collect, we received that figurative poke in the side recently and decided to expand our business to include what we like to term "modern vintage", as well as modern trading cards.

So, you're probably thinking to yourself, "What is modern vintage? and... wait a second, Just Collect is now buying and selling modern-day trading cards?!" To paraphrase the immortal broadcaster Marv Albert (without having to wear a horrific toupee): "YES!"

And to answer your question about the term "modern vintage", others like to refer to it as the "junk era". Just Collect will be focusing on the hidden gems and the cards your mom didn't throw out because she thought your college education would be covered by that six inch stack of Brien Taylor 1992 Topps Gold autographs you had stashed under your bed (#StraightCashHomie).

A short while ago, we were fortunate enough to acquire a beautiful collection of PSA-graded modern-day beauties, which will be listed on eBay in the coming days and weeks. It hails from the sunshine state of Florida, where the seller will now be using the money to put towards his nieces and nephews college fund.

While there aren't any PSA 10 1986 Topps Bob Dernier cards in the bunch, I’m sure the next five cards will pique your interest and wet your palette for modern cardboard: 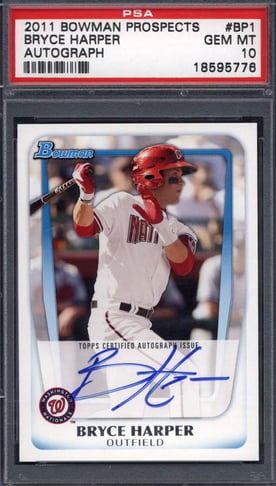 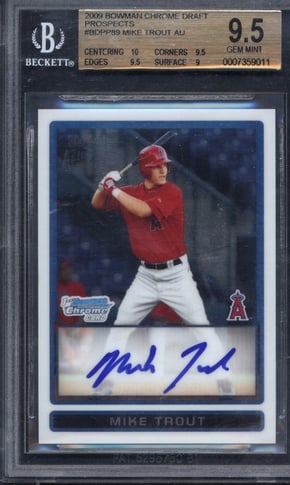 Bryce Harper PSA 10 2011 Bowman Chrome Prospects Autograph – This card has taken on a life of its own the past few months, as it appears Harper is finally coming into his own and quickly approaching Mike Trout status. Lest we forget, he was Mike Trout before Mike Trout was Mike Trout. You dig? Back in 2009, his AFLAC All-American card was hotter than Pamela Anderson in Baywatch. After a few up-and-down seasons which included some freak injuries, Harper is back on the scene and anything with the name Bryce Harper emblazoned on the front is scorching.

Mike Trout BGS 9.5 2009 Bowman Chrome Draft Picks & Prospects Autograph – I can recall the days when this card, ungraded, sold for under $50. Let’s refer to this particular card, and any color variation therein, as the Apple of the modern baseball card world. If you were savvy enough to have purchased Apple stock before the iPod craze took off, I’m pretty sure you’re sitting on a yacht somewhere doing your own Dos Esquis commercials. The same can be said for any Mike Trout card from 2009-2011, but most specifically this card. The returns are off-the-chart, year-over-year, beginning in 2009.

Buster Posey PSA 10 2008 Bowman Chrome Draft Picks & Prospects Autograph – Back in 2008, the two best cards to pull in a box of 2008 Bowman Draft Picks & Prospects were certified autographs of Gordon Beckham and Buster Posey. Fast forward seven years and Beckham is yesterday’s news and Posey is a two-time World Series champion at 27. He has all the tools to become the West Coast’s version of Derek Jeter. Toss in the fact that Posey had only three different certified rookie autographs issued in 2008, and you’ve got all the makings of a card primed to increase in value over time!

Ron Santo PSA 10 2004 Topps All-Time Fan Favorites Autograph – Not an overly expensive card, but to the rabid Chicago Cub collector, this card is at the top of their list of Santo autographs. The card mirrors Santo’s timeless 1961 Topps rookie card and contains Santo’s "John Hancock", which Topps certified by affixing their familiar gold-embossed "Topps certified autograph issue" stamp to the face of the card. In our humble opinion, this is the best-looking Santo certified autograph card ever issued. 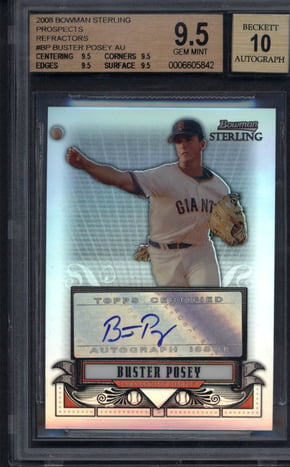 Roy Halladay PSA 10 1997 Bowman Chrome Rookie – Another relatively inexpensive card, but a card that comes from one of the most important sets in the history of the hobby. Back in 1997, when collectors were looking to up their rookie card game, Topps released a chrome version of their staple Bowman brand, which then was dubbed: "The Home of the Rookie Card". Well, when Bowman Chrome hit the market in 1997, their base Bowman brand became instantly obsolete. In fact, a whole new subset of collectors, who referred to themselves as "Chromies", was born. Cards of Kerry Wood, Travis Lee, and Jose Cruz Jr. were flying off dealer tables at ridiculous prices. In fact, Wood cards were commanding a C-note or more, and parallel versions were off-the-charts. A couple of years later, when Halladay emerged as one of the best pitchers of his generation, this card took off. It's still very sought-after in a PSA 10 holder due to centering and surface issues which were common for this product.

We are looking to purchase collections, large and small, of both vintage and modern cards, from all sports and non-sport products. Please visit our eBay store to browse or purchase from the Nation's largest buyer of vintage cards. If you have cards you're interested in selling, you can reach us through our website.