As you know, we attended the National two weeks ago, and it was a great success. Not only was it great for business, but we were able to meet a lot of you there, where we shared stories, got feedback, and even bought some collections – which was nice. Once we got settled back in, we will do a full review of how the National went, along with some of our exciting purchases. But for now, we wanted to share this story with you, which happened right before we left for Chicago!

For those of you who are not familiar with The National, the few days prior are the most crucial and also the most stressful! We essentially spend the entire week getting ready (Monday-Friday), then pack up on Saturday, and head out on Sunday. Since it’s usually somewhere around a twelve hour drive (NJ to Chicago, Cleveland, etc) we arrive early on Monday and try to get some rest before the madness starts on Tuesday morning.

So, when we got an inquiry to sell on the Friday morning before we left, you can imagine on how busy we were. With that being said, it was an incredible collection, so we stopped everything we were doing, and spent some time familiarizing ourselves with this Pennsylvania collector and his collection. Turns out, he had over four hundred T206 cards, a partial 1952 Topps set, compete sets from 1977-1985, and some miscellaneous Hall of Famers – obviously something we were interested in. After spending a few minutes on the phone, we knew that he was serious about selling his collection, so we quickly set up an appointment. He was not able to come in that day on such short notice, and since we were going to be away for a week at the National, we scheduled him for first thing when we came back. While we were away, he worked with one of our specialists getting together a full list of his cards, along with a few photos.

Everything worked out great, and we met with him on the Wednesday after we came back. He came down to our office for the appraisal and even brought a friend! They were in the office for about two hours, with most of that time devoted to us researching current market values. He and his buddy were very patient throughout the entire process, something we were grateful for, given how long everything took.

When he arrived with his collection, along with what was mentioned above, he also had a 1909 E95 Philadelphia Caramel Honus Wagner which is one of my favorite cards. The E95 Wagner and a 1952 Topps Willie Mays highlighted his collection. 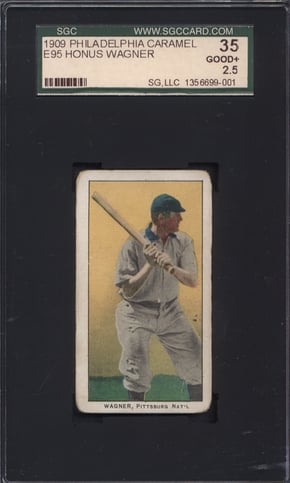 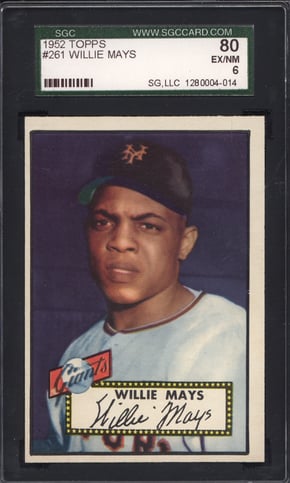 According to PSA & SGC population reports, there are only 228 examples of the E95 Wagner in existence. Obviously not as rare as his T206 card, but nonetheless, it’s still valuable and extremely desired by many collectors nationwide. Even in this low of a grade (Good+), the card is still worth over $1,000, which speaks to the importance of pre-war cards to the hobby.

The Mays is an absolute beauty. We weren’t interested in this card for it’s rarity (because there are thousands of examples), but rather for it’s condition. The vast majority of Willie Mays 1952 Topps cards grade out EX or below (75%), which makes this EX/MT example stand out. Not only that, but it’s the nicest EX/MT example we have ever seen of the Say Hey Kid. The card has NM/MT corners, but unfortunately has EX to EX/MT centering, which is why it received the assigned grade of an SGC 80.

Aside from the Mays, there were a bunch of examples from the 1952 Topps partial set that also caught our eye. In this collection, there was a #175 Billy Martin rookie, #33 Warren Spahn, and a #216 Richie Ashburn – all of which were graded Near Mint or higher by PSA, and worth a few hundreds bucks a pop or more. Other cards from the ’52 set were a #1 Andy Pafko, #191 Yogi Berra, #277 Early Wynn, #37 Duke Snider, and #59 Robin Roberts. Those examples ended up being lower grade. 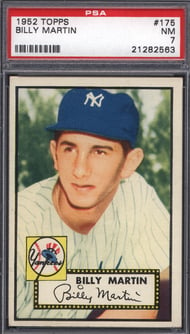 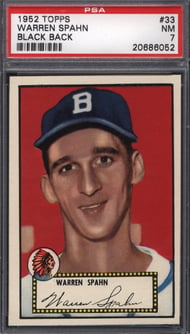 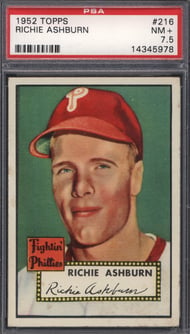 So, we ended up buying the partial 1952 Topps set, the E95 Wagner, and the run of Topps sets the collector had. Unfortunately, we weren’t able to reach an agreement on the T206 tobacco cards, but that’s ok. We know that we gave him a very strong offer based on their condition and current market value, and there’s a pretty good chance that he’ll be back sometime in the near future looking to sell. It was one of those things where we could tell there was more of an emotional attachment to that part of the collection. During the evaluation he was telling how how he’s spent most of his adult life collecting these T206’s, piece by piece over a long period of time – whether it was from going to local shows or turning to eBay’s marketplace. There was no need to pressure him into anything, as we only bought what he was comfortable selling at the time, and we both left happy.

Do you have a collection for sale? We are always looking to buy vintage cards, ranging from early tobacco and candy cards, all the way up through the late 1970's. Right now, the 1952 Topps set is really hot, and we are looking to buy rookies, singles and complete sets. Please let us know if you or someone you know has a set for sale, as we're paying $250,000 for a NM/MT complete set! Call us today!

Check out our baseball set list to see what we are paying for other vintage sets.