It was quite the trip for us last weekend, as we scoured the State of Florida looking at vintage sports card collections. Traveling from New Jersey was an obstacle in itself, as the flight out was delayed due to weather, thus pushing back every appointment from the get-go. We landed Thursday evening, and started our journey in Miami. The next two days we hit Orlando and Tampa, then finished up with Miami again on Super Bowl Sunday. The travel fiasco didn’t end there. Our flight out of Miami that night was cancelled due to snow in the Northeast, so we were stuck in South Beach for an extra day – I guess things could have been worse. Anyway, it was a very eventful trip to say the least, as we were set to meet with 10 different sellers across the state. We ended up purchasing five of those collections, and are still hopeful on securing two more of them.

The most impressive collection we saw came from Ft. Lauderdale. It was a collection comprised of every single Topps set from 1952-2010, organized in binders, with each set in numerical order! We spent about six hours with the potential seller, reviewing the collection, giving an appraisal, and then making an offer. Unfortunately, the deal is still in “limbo”, and we are just waiting to hear the final word. But, let’s skip to the best part – the five collections we bought! The first collection we bought came from the very first appointment we had, which commenced about an hour after landing in Miami. It was a very small group of T206 tobacco cards, but they were sharp! It was literally only 8 cards, but the condition was too good to pass up. The majority of the cards should grade out in the VG/EX to EX range, with two examples possibly hitting the EX/MT+ threshold! We are very excited about these T206 cards, as the market is very hot right now. Take a look at these beauties:

We only had two appointments scheduled for Friday, because we knew that they were both extremely large collections that needed time and attention. The first collection we saw was the Ft. Lauderdale one mentioned above, and the second collection we saw was just as good (in Boca Raton), as it consisted of a nearly complete '52 Topps set, a near set of 58's, and thousands of high-grade vintage commons/minor stars. Neither deal ended up working out, but we are still hopeful of acquiring the collections in the near future. In the case of these two, we were able to agree on the actual value of the collections with each “seller”, but were off on purchase price – something that happens from time to time. Sometimes it has to do with the emotional value attached to the collection; sometimes it's the monetary value they've invested into the collection and not realizing how the market changes over the years; and sometimes it's a combination of both. Not every appointment ends up with a transaction - but that’s ok. Our purpose is to provide collectors with fair and honest appraisals on their vintage collections, as everyone is entitled to know what their collection is actually worth - and not some inflated book value, but the true market value! The next appointment was bright and early Saturday morning in Orlando. It was another fantastic collection, but unlike the two previous, it only consisted of a handful of cards. Sometimes, quality trumps quantity. It was about 25 cards, consisting of a few Mickey Mantles, T206 Hall of Famers, and vintage rookies – all great stuff. Another collection we were happy to appraise, but after only a few short minutes, we knew that we wouldn't be able to buy the collection. It was one of those situations where the collector had overpaid for the cards years ago (based on their condition)– and not by a little, but by multi-fold. That's why it's always important to do your research before spending your hard earned money. Nevertheless, we wrote him up an official appraisal, and were happy to get the opportunity to meet with him. Well, we’re batting .250 so far – not exactly how we wanted to start the trip out. We were still very hopeful though, as the next two appointments had some big potential, and they were just minutes apart in South Tampa! The next collection was a complete run of sets from 1973 to 1990 – all in decent shape. Along with these complete sets were singles of stars & rookies from the 1970s – material we love buying! Here were some of the key rookie cards in this collection: 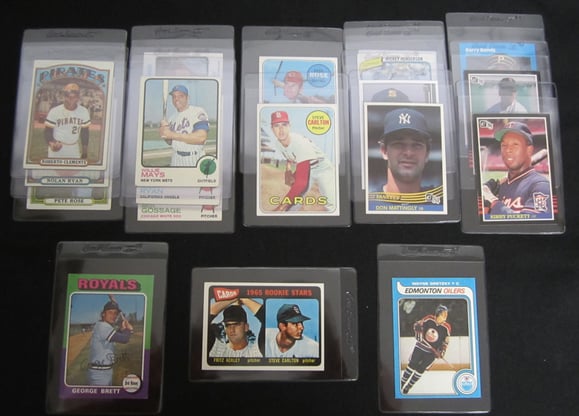 We then packed up the truck and drove a few miles down the road, to meet up with our next appointment. It was a very small collection, but if the condition was right, we knew it would be well worth it. The gentleman had a sharp group of 1933 O-Pee-Chee & Hamilton Gum hockey cards - 16 of them. Some very nice cards that we rarely come across, so we were excited when he decided to sell them to us. I mean, they definitely weren't in mint condition, but that doesn't matter for these, as they still are in hobby-desired condition, and are somewhat rare. Here’s a sample: 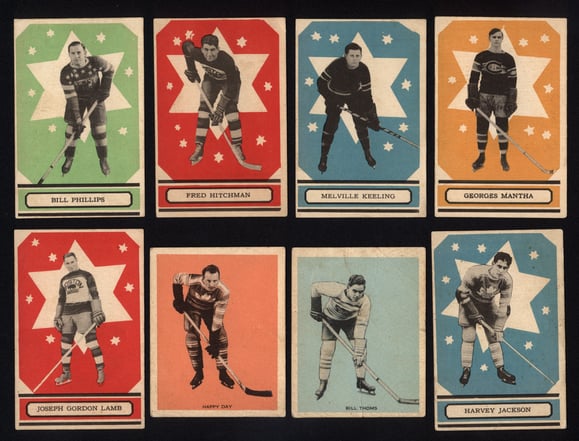 One of the more interesting cards in the group was 1933 OPC card #18, legendary goalkeeper Lorne Chabot. He won two Stanley Cups, one with the Rangers and one with the Leafs, while also securing the Vezina Trophy in the 1934-35 season. Chabot only has eight trading cards, and this example happens to be one of the most coveted. Even in low to mid-grade, the card is still worth a few hundred bucks. Also, there only happens to be a handful of these cards available. The PSA population report suggests that there are less than 50 in existence, with very few high-quality examples. Our first appointment on Sunday was one we were definitely looking forward to. It wasn't a huge collection, but it consisted of a bunch of Mickey Mantle cards, along with another thousand or so vintage New York Yankee cards! How could we resist?! The only downside to the deal was that we had to drive overnight all the way back down to Miami to meet up first thing in the morning - but let me tell you, it was well worth it. The collection had every Mantle card from 1957 to 1969, plus Maris' rookie card from 1958. It also included a few dozen Yogi Berra, Phil Rizzuto, and Bill Dickey cards, dating all the way back to the 1940's. Another added bonus? On top of all that, the collection also had a nice run of 1952 Topps High Numbers!  As soon as we got back to the office, we sent a bunch of these cards out to PSA for grading. We are very excited to see how they grade out – and of course, will be offering them via our eBay store in the early Spring! 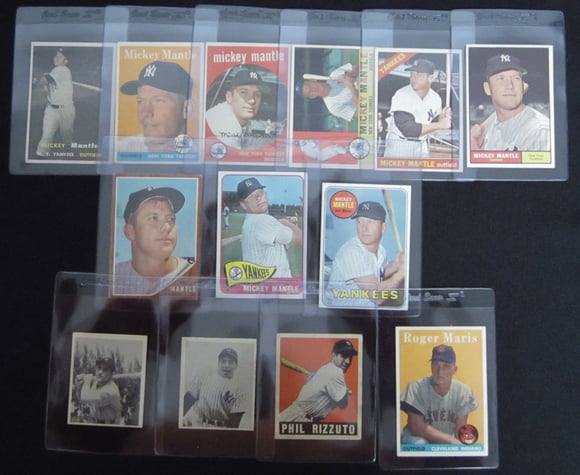 This collection also had a few pieces memorabilia, including some vintage Life Magazines, Programs, and Scorecards. The piece of memorabilia that stood out the most was the program & scorecard from Allie Reynolds 2nd no-hitter in 1951. Check it out: 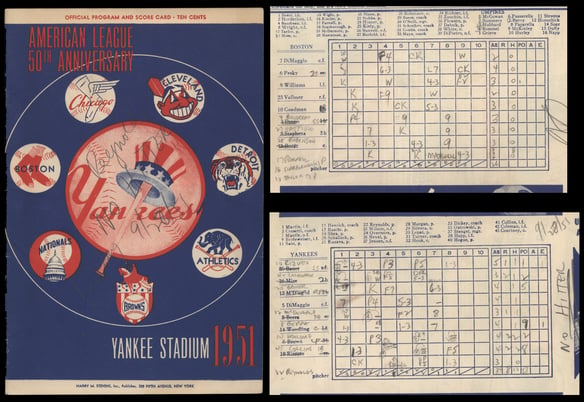 We wrapped up the trip in South Beach, looking at a collection of baseball cards and unique pieces of memorabilia. This appointment was actually the reason we had initial interest in a “buy trip” in Florida. One of the best parts of the collection was the complete sets of 1970, 1972, and 1975 Topps cards. All were in good to very good condition, and as you know, are loaded with stars and rookies. Also in his collection was a 1954 Topps Hank Aaron rookie, and a 1957 Topps Brooks Robinson rookie – both mid-grade.

Now, here’s where the collection really gets interesting. One of the coolest items is the 1982 Topps Rack Pack, which has a Cal Ripken Jr. rookie card on top! What are the odds of that?! You definitely don’t see that every day (zero currently listed on eBay).

Do you like Muhammad Ali autographs? Well, how about seven? Yes, seven Cassius Clay autos were included in this deal. We plan on sending those out to PSA/DNA for authentication in the near future. 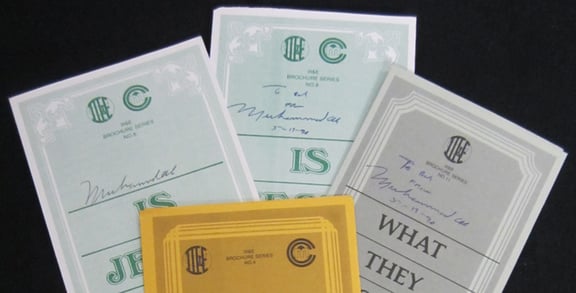 Some other interesting pieces included the handful of 1984 Orange Bowl programs and ticket stubs – ya know, the game where Miami was 10 1/2 point dogs, but hung onto a gut-wrenching one point victory with less than a minute to go. Incredible game. That gave Miami their first National Championship, and put the program on the map. Memorabilia from that game continues to gain popularity throughout the hobby, especially for those collectors down in Southern Florida. As you can see, this was a very successful buying trip for Just Collect. We are in the process of setting up our next two trips, so please contact us if you are looking to sell your collection! We are planning to touch down in the Boston area in the next few months, as well as the Allentown/Bethlehem, PA area relatively soon.