Honestly, I don't even know where to begin. This collection is so magnificent, that we could spend hours, or even days, awing over every card. It's being referred to as the "Volunteer Collection", as it comes from Knoxville, TN - home of the Volunteers. Dating back decades ago, nestled deep into the valleys of Tennessee, one collector began his journey of assembling an extraordinary collection of vintage Hall of Famers. Today, we're happy to share and be an integral part of his story.

The gentleman, who lived just minutes away from the University of Tennessee, began collecting baseball cards during his early childhood, amassing hundreds of vintage favorites, such as tobacco cards, Cracker Jack, and Old Judge cards. Years after stepping away from the hobby, his love of collecting was rekindled, and he began his search of collecting sets from the 30's, 40's and 50's. Because of his prowess and passion for the hobby, his collection grew to mammoth proportions, and now features many key components, including hundreds of quality T206s, several dozen T3 Turkey Red Cabinet cards, a T200 Fatima Team complete set and a 1953 Topps Baseball complete set - just to name a few. His collection also includes a Joe Jackson & Ty Cobb card from the 1915 Cracker Jack set, both presenting very nicely. His T206s are comprised of virtually every Hall of Famer, in almost every variation (except for the Wagner and Plank, of course)! This collection includes Babe Ruth and Lou Gehrig cards from the '33 Goudey set and the Joe DiMaggio rookie from the '38 Goudey set. Did I mention that it even includes a dozen or so N172 Old Judge cards from the 19th century? This is truly an incredible collection, that spans across more than seven decades of the best issues that the hobby had to offer. Last month, we were fortunate enough to finally meet the gentleman behind this masterpiece, and even more grateful to be able to purchase it from him.

"I have decided to pass my collection along to the folks at Just Collect to find them a good home... Scott was a great communicator and really took the time to explain the baseball card collecting industry. I appreciate their effort in purchasing my collection... Just Collect came to my home to preview my collection and we discussed the condition and the value. I asked for some time to consider the information that was provided and after some reflection and consideration, I felt that Just Collect's offer was fair and agreed to sell the collection to Just Collect" -Larry, Knoxville

Now, let's check out the highlights: This is my favorite part of the collection. In my opinion, I think that the 1915 Cracker Jack set is one of the most unique and desirable sets to ever be produced. You may disagree, but you can't argue the fact that the set still holds tremendous market value, and consists of many key, sought-after Hall of Famers. Plus, it features the highly desirable "Shoeless" Joe Jackson - a card that everybody wants in their collection. The Jackson card is still in great condition, considering it is only months away from being 100 years old. The centering is a key highlight as well as the bright and vivid colors. The Cobb is a beauty as well, pleasingly centered on the front and back, with a crisp, clean image of the 12-time batting champion. 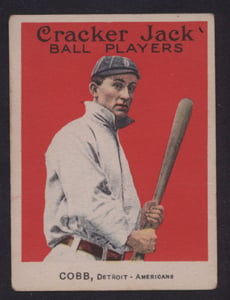 Another key piece to this collection is the Joe DiMaggio rookie card. It comes from the 1938 Goudey Set and is considered one of the rarer cards from the post-dead ball era. There are actually two variations of this card in the set, the high number, which includes writing and graphics in the background (#274), and the base card, which has a plain background (#250). The high number example is obviously more desirable and in greater demand, as there are less than 250 PSA graded examples in totality. The 1938 Goudey set shows some great moxie, in both design and production.  This set is sometimes referred to as the "Heads-Up" set, because each card features a cartoon-like drawing of the players body, with an over-sized photograph of his head. The set is also oddly numbered, starting at number 241 - leaving off where Goudey's last set ended, five years earlier. This DiMaggio card is ideal for almost any collector looking to add "The Yankee Clipper" to their collection, and will generate extensive interest throughout the hobby. 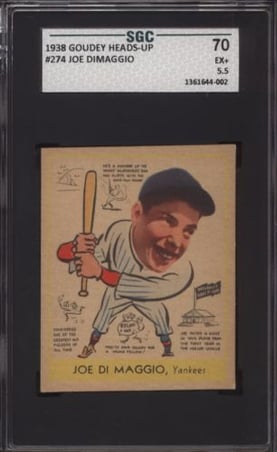 He's undoubtedly the greatest player to ever lace up the spikes and he spent the hey-day of his career in New York with one of the greatest franchised in history. You can't go wrong when collecting Babe Ruth cards. Whether it's his extremely rare Baltimore News rookie card, his ever-popular Goudey, or his black and white American Caramels, each and every card seems to gain value year after year. There was a Ruth card in this collection, and it did not disappoint. It actually comes from the 1933 Goudey set, and is my favorite of the bunch. The card features "The Bambino" swinging his enormous piece of lumber, warming up for a game. He's placed perfectly on a baseball diamond background, displaying extraordinary pastel colors, making his image "pop". The card itself is in great condition, as it's almost perfectly centered with no visible creases. And what would perfectly compliment a Babe Ruth card? You bet, a #92 Lou Gehrig card from the same set! This is another nicely centered card that has tremendous eye appeal, and is sure to be bid on by collectors from around the world. 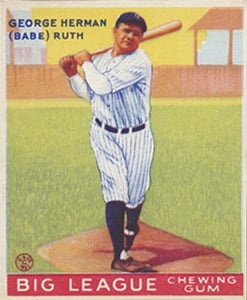 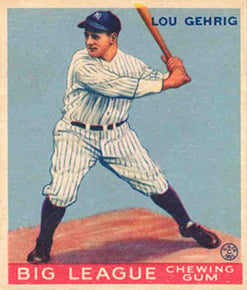 1913 was a great year: The Grand Central Station reopened, the Post Office began parcel post deliveries, Traffic In Souls premiered, and Fatima Cigarettes produced a baseball card team set. The set consists of 16 cards, which features photos of the eight teams from both the American and National Leagues. The cards were produced on an extremely thin and fragile photographic-stock paper, which makes these cards impossible to find in high grade - let alone as a complete set. When we heard this collection featured a complete set of T200 Fatima Team cards, we knew this collection was going to be something special. Just as before, we were not disappointed. With all things considered, the cards are actually in pretty decent shape, and we have all 16 of them! Two of the better cards in this "mini set" are the Detroit Americans (Tigers) Team card, which features Ty Cobb and the New York Nationals (Giants) Team Card which features Jim Thorpe. The most popular card in the Fatima set is the Cleveland Americans (Indians) Team Card, which features Shoeless Joe Jackson. To put into perspective how rare these cards are, PSA has only graded a total of 1270 cards from this set, TOTAL. That's an average of about only 80 examples of each card floating around the hobby - with only 10 examples graded higher than EX/MT! We are very excited to see how these cards will grade out, and as soon as we get them back in, we will auction each one off via our eBay auctions.

Amazingly, the collection continues with hundred of T206 tobacco cards.  With multiple cards of Ty Cobb, Cy Young,  Walter Johnson, Chief Bender, Christy Mathewson and virtually every Hall of Famer and a variety of poses, this collection featured one of the more extensive accumulations of quality T206's that we've seen in quite some time.

We would be remiss if we failed to discuss the several dozen T3 Turkey Red Cabinets.  Available as a premium redemption for Turkey Red Tobacco, these oversized cabinet cards are difficult to come by.  This collection not only included a nice grouping, but many of the tip Hall of Famers are included such as Ty Cobb, John McGraw, Hugh Jennings and many others.  Interestingly, the assortment included both the checklist backs (both series) and the tougher advertising backs.

As always, Just Collect is buying vintage baseball cards and memorabilia. If you are ready to sell your collection, contact our office today to get a free appraisal!