7 Unexpected Places You Might Find Antique Sports Cards and Memorabilia

In the late 1800s and early 1900s, baseball cards were little more than adjunct advertising and promotional pieces. As such, they were treated with little regard. Cards were cast aside with other household junk or used for some alternative purpose. Collections of early baseball cards and memorabilia, therefore, will pop-up in the strangest places. Here are seven of our favorites.

When Just Collect purchased the Hole-in-the-Wall collection of 1920-1923 "strip" cards last year, it was as much about the story as it was about the cards themselves. The 262 cards in the collection were great — five Babe Ruth cards, a Casey Stengel, a Ty Cobb and a George Sisler — but the story was even better.

The cards were discovered when a man climbed into a crawl space to try and get rid of a family of raccoons in his apartment in Jersey City, NJ. While in the crawl space, the man's cell phone fell and slipped through a crack that turned out to be large enough for a cell phone, but smaller than his arm.

The only way to retrieve the cellphone was to wiggle out of the crawl space and begin cutting a hole in the wall of his daughter’s bedroom. As he started cutting, ephemera started falling out of the wall, all of which appeared to be both garbage and far less important than the cell phone. As he continued to shovel the paper from the wall into a garbage can, he saw the word "Babe" out of the corner of his eye. He then returned to the garbage can and sifted through the trash until he found 261 nearly century-old cards.

The Hole-in-the-Wall find was reminiscent of the ninety-year-old "Ruth Babe" barnstorming poster (the Babe’s name was printed in reverse) found behind a wall during the demolition of a home in Minnesota in 2014. And also of the 1893 Just So Tobacco card of Hall of Famer Buck Ewing, one of only fifteen total from the Just So set and the only Buck Ewing card known to exist, found stuck to a crossbeam during the renovation of the home. The card still showed the antiquated hammer marks, more than likely from a construction crew a century earlier when they used the card as a marker during a previous renovation.

The best known and most lucrative discovery of lost cards in history has become known as the "Black Swamp Find.” This collection of more than seven hundred 1910 E98 cards was found in an attic in the town of Defiance, Ohio. The 1910 E98 series is a set of 30 players, half of whom would eventually become baseball Hall of Famers. The cards included Cy Young, Christy Mathewson and Ty Cobb – though the cards of some of the unknown players were amongst the most coveted and valuable.

Not only were these cards amongst the rarest in the hobby, many of the century-old cards were graded as PSA 8 and higher. The cards had been stored in a cardboard box, still in the same small piles secured loosely by twine in which they had been delivered to their original owner one hundred years earlier. Experts explained that because the chemical composition of the cards and the cardboard box in which they were held was so similar, there was no contamination of the cards by its container.

The combination of rarity and condition caused a great commotion between the discovery and the auction during the National Sports Card Convention just several weeks later where the cards sold for more than $500,000. Like most discoveries of long lost baseball card treasures, this one provided just enough clues to allow for debate about how the cards arrived there – but not quite enough information for any one story to prevail.

The cards originally belonged to Carl Hench, the operator of a butcher shop in the early 1900s. The manufacturer of the 1910 E98 set is anonymous, so their creator and purpose are subject to speculation. Hench’s adult grandchildren, the ones who found the set while cleaning out the attic, believe the cards were given to their grandfather by a candy company that was including them to help promote their line of caramels. They figure that Hench gave away most of the cards to customers, but kept a few bunches for himself. 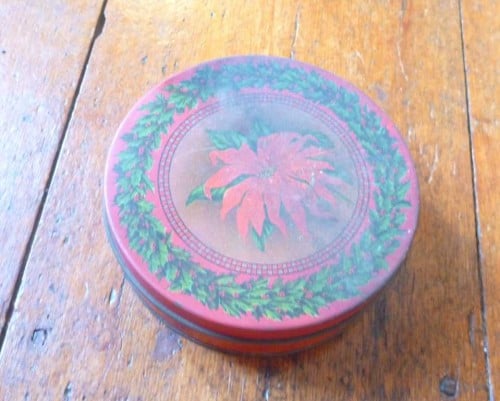 Last June, an archivist cataloging typical historical ephemera, letters, postcards, and photos, at the historic Parker Homestead in Little Silver, New Jersey came across a dusty old cookie tin filled with, among other things, baseball cards from the Philadelphia Caramel Company. The cards were recently sent to PSA for grading, and are believed to be in remarkable condition, protected from the elements for the past seventy-five years by their cookie-tin host.

#4. Inside of old bibles 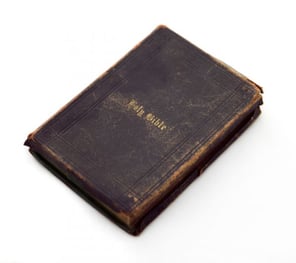 Yes, bibles. Last year, an 1887 Four Base Hits Tobacco John Clarkson (a HOF pitcher best known for winning 53 games in 1885) was discovered inside the pages of a 19th Century bible. It appeared as if the card had been used as a bookmark. The card ultimately sold at auction for $95,600 after being judged to be the only complete version of the card still in existence; only 17 cards from the entire 1887 Four Base Hits Set are known to exist.

The earliest baseball cards were photographs—and don’t always look the way that an untrained collector might expect a baseball card to look. For this reason, valuable cards have been included in sales of otherwise unremarkable collections of items. 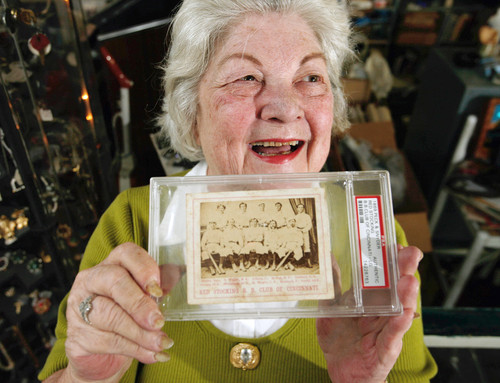 In 2009, for example, a woman in Fresno, California found a rare card of the 1869 Cincinnati Red Stockings amongst a pile of ordinary non-sport contents of a storage space she purchased for her antique store.

A man in Portland, Maine bought a photo album at a yard sale and discovered a nearly 150-year-old card in the form of an original photograph pasted to a card of the 1865 Brooklyn Atlantics amateur baseball club. He later sold the card at auction for $92,000.

Earlier this year, a husband and wife purchased an old, ratty sweater bearing “West Point” across the chest at a thrift store for $.58 (that's fifty-eight cents!). Months later, the couple took a closer look at the sweater and noticed its name tag read: "Lombardi." Through painstaking analysis, the couple ultimately confirmed that the sweater had once belonged to and been worn by Vince Lombardi while he coached at West Point between 1949 and 1954. The sweater sold at auction for $43,020.

Sometimes even antique dealers don’t understand what they have. Back in 1992, a baseball card collector bought an unopened pack of 1910 Piedmont cigarettes at an antique store for only five dollars, with the cellophane wrapping still fully intact. While this may have been the going rate for eighty-year-old cigarettes, unbeknownst to the shop owner, every American Tobacco Company cigatrette pack also came with a T206 tobacco card including the possibility of baseball card’s Holy Grail, a mint Honus Wagner.

Some cards aren’t hiding at all---they're just waiting for their owner to appreciate what they have. This was the case with the million-dollar find that went viral on Antiques Road Show earlier this year. The woman’s great-grandmother ran a boarding house that hosted members of the 1871 Boston Red Stockings. She put together a collection of cards and autographs of the players, including Al Spalding and George Wright. The collection sat unassumingly in a desk drawer until 2015 when the woman’s great-granddaughter appeared on Antiques Roadshow and was shocked when she was told the collection was worth one million dollars.

Similarly, a family in New York City overlooked a rare Lou Gehrig piece until a friend with knowledge of baseball memorabilia told them about what a treasure they were sitting on. The family had been keeping an old, beat-up baseball bat behind their front door for protection for decades before it was brought to their attention that the bat was a rare game-used 1929-1931 Lou Gehrig bat.

No one knows where the next great collection is going to turn up or where it will be found.

If you’re lucky enough to make the next great find, call Just Collect for a free appraisal. We are the nation’s largest buyer of vintage baseball cards and are always buying vintage card collections and memorabilia of all sports and we would be happy to share your story.