An old album in an attic held 150 tobacco baseball cards including an ultra-rare Shoeless Joe Jackson!  Look at the diamond among the stars in our West Virginia Attic find!

In the middle of a world wide COVID-19 pandemic, amazing hobby finds still find their way to Just Collect, and we are prepared and able to work with the public to facilitate the evaluation and the potential sale of some great collections even in the midst of most states, travel, and personal interaction between people being extremely limited.

Buying a Collection During COVID

Just Collect received an email from a gentleman in West Virginia that found an album while cleaning out the attic of a home that he purchased and was renovating.  The album, he noted, was found near a chimney and appeared to be dirty and have some soot and water damage, but contained more than 150 tobacco cards.  Most were T206 cards, but there were also some non-sport cards, E95, E90-1, and a T210 card in the collection.  He explained that some had fallen out of the album and some of the more notable names were taken out to review and photograph.

The original list included with the first inquiry mentioned several of the Hall of Famers, including Ty Cobb, Cy Young, Walter Johnson, and Christy Mathewson.  Given the condition as explained, we were interested, but also tempered our expectations as these cards in PR to GD condition still have value, but not tens of thousands that they would fetch in EX or better condition.  So, after reading the notes from the inquiry, we took a look at one of the pictures that accompanied the inquiry.  WOWSERS!  The players mentioned were there, albeit, mostly in PR condition, but sitting there, unannounced, was a true scarcity.  Something that was worth more, even in PR condition, than the entirety of the other cards.

Did You Find it?

Here's the original image that we received.  Can you spot the gem? 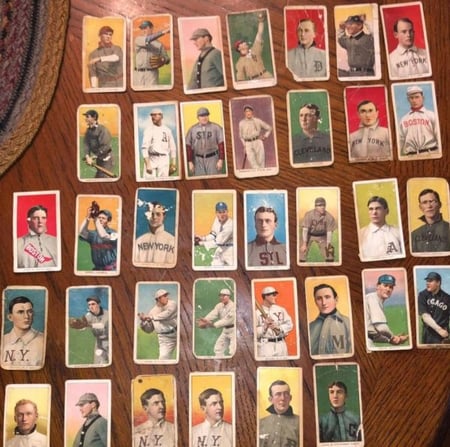 Sitting right in the middle of the second row is a 1909 E-90-1 American Caramel "Shoeless" Joe Jackson card.  Sure, he's not a Hall of Famer, but he is one of the most desired players of the era due, in part to the infamous Black Sox scandal of 1919, but also due to his incredible on-field performance, before being banned from the game for life by Commissioner Kenesaw Mountain Landis.

Here's a better look at the card:

How Did This Collection End Up at Just Collect

The gentleman enlisted the help of a close friend to help him research the cards and to try to find the best way to sell them.  They sorted the cards, researched the values, and while doing their research, found several stories on the Internet about Just Collect and some of the great tobacco collections that were found and purchased and how happy the sellers seemed to be.  So, when they were reaching out for more information, Just Collect was one of the select companies that they contacted.  Just Collect was also the only company that got back to them quickly and with what they felt was a real and reasonable assessment of the collection and that was willing to work with them to get the collection reviewed.

What's in the Album 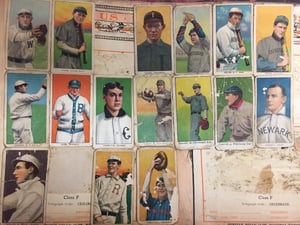 Not only did the collection include the 50 or so card images that were sent to us, it also included more than 100 cards that were still in the album.  As you can see in the image to the left, the album was in pretty beat up shape.  Here's a page from the inside.  You can see the spots where a cards were removed and also many others still affixed in the album.

The album has some pages that are in better shape and some that are in lesser condition.  There are still many cards, including Hall of Famers, that have not been removed.  We may actually make this album, and the 100 or so cards still contained within, available for auction at some time in the near future.

After completing a preliminary evaluation and agreeing on a ballpark price, we worked to arrange the transport of the collection, but the seller was very apprehensive about shipping the collection. Accordingly, Just Collect was equally concerned about travel during the pandemic. The seller was very interested in selling and stated that they would be willing to come to meet us if we could make that happen.

With concern for safety and the health of everyone involved, we discussed and agreed upon a meeting that would provide a safe and socially distant area for the final evaluation as well as providing privacy and security for everyone. So, a date was set and the seller and his research friend drove 6+ hours to meet with Just Collect and have the collection reviewed and a final offer presented.

The meeting was easy, everyone was wearing their masks, and the collection was reviewed, evaluated, and a final offer presented to the seller which was accepted. The seller said, that based upon the research that they did, that the evaluation and the offer were right in line with the expectations and that they were extremely excited. The seller told us after we completed the deal that he told a friend that he was driving up to New Jersey to sell a baseball card collection and the friend said, "Why would you do that for a few hundred dollars?"  He said that he couldn't wait to show his friend the check that he got.  He said that next time, after meeting us and seeing how professional we were, that he would have no issue shipping any other collections that they may come across.