Modern Cards, Grading Updates, and a Hall of Fame Suprise 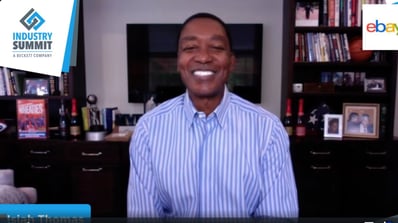 Day two of the Beckett Industry has wrapped and we have a few updates on grading, the boom of modern cards, and a surprise visit from an NBA Hall of Famer!

Another great day at the Summit, pulling hobby news for you!

One of your most frequently-asked questions is about updates on grading.  BGS was on-hand to update us on their current situation.

Excellent points by BGS' Jeromy Murray.  While we want our cards returned quickly, having incorrect grades or a fake auto passing as authentic truly hurts the hobby more than anything.  We're in the same boat as you; we're all waiting for batches not only from BGS, but PSA and SGC.  Maybe not the answer you would like to hear but getting the correct grade means a lot to the hobby.

One of the coolest products on display was the ball and card flip that you can display a ball and card vertically or horizontally in.  We asked about an 8x10 and card or 8x10 and ball for a picture with a star you met and the auto, and Ultra Pro said that molds are expensive to make; if the company could sell enough to make a profit, they would create a design.

We have all seen the huge boom in modern cards.  A friend of ours, Ken Goldman of Goldman auctions, states the boom not only started pre-Covid pandemic but is JUST starting.

For months, many of us attributed the boom to Covid; previous collectors needed a hobby during the boredom and returned to an old love.  Goldman saw sales show otherwise, though. Ken states he put up a PSA 5 Honus Wagner that fetched 3.5 million (a record) and an LeBron James rookie that sold for $300,000 but the LeBron drew more attention. Ken started to see an uptick in modern cards in the second half of 2019, before Covid. Goldman believes the pandemic is speeding up the process of modern card values rising but was not responsible for the boom as we all assumed.  Ken also thinks we're only in the third inning of the game for how much the modern cards will boom!

Dr. Beckett is a legend in the card world.  Perhaps you've read his price guides...Beckett... 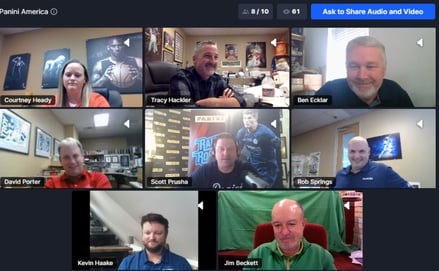 When asked about the cost of modern cards being too expensive, the Dr. explained that we have so many alternatives to help.

Beckett has a broad interest in cards.  When conjuring up his first price guide, he was asked if were really going to put the value every card and ever sport - he said, well, yes!  Putting his broad interest into the card world, he loves the alternative - and doesn't mind looking in the $1.00 bin to enjoy the day.

Nothing like starting the day off with a surprise visit from one of the 50 greatest players in the NBA!  IT's accolades are second to few so rather than focusing on his career stats, we got to learn some unique facts. 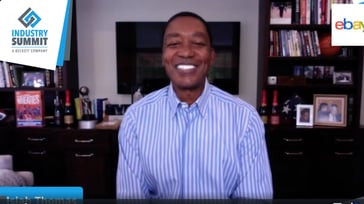 Isaiah is the youngest of 9 children.  Growing up, the family battled bouts homelessness and had brothers succumb to alcohol and  drugs.  When asked about his flashy smile during the Summit, Thomas responded he was once so poor, he brushed his teeth with only baking soda and a rag.  Look at that smile - maybe we should all have used a rag...

To overcome poverty, Thomas knew education was key.  IT made a promise to his mother that he would graduate college, and signed a contract for her.  After leaving Indiana University, IT spent the NBA off-season taking double sessions ON CAMPUS!  There was no Internet back in the late 80's for IT to learn during down time.  IT ended up graduating in 1987, six years after leaving school for the NBA. IT event went on to UC-Berkley for his Masters in Education.

IT believes LeBron is the most complete player and a great critical thinker.  Thomas also believes players his height today have a better advantage than his playing days when rules were favored towards the bigs.

As collectors, this is a big deal to us; we love autographs!  Whether in-person or pulling an auto card out of a pack, we cherish signed items.  IT wants to remind us that if you get turned down for an autograph to think what the player may be going through.  IT appreciates you standing in line or in the rain, but perhaps a player is going through something personal and can't or doesn't have a moment to sign.  Don't take the player's "no" response to them being a jerk - show compassion and understand that the player sometimes just can't sign.

We'll be providing more updates after Day 3 of the Summit!  Keep checking for new products, stories, or behind-the-scenes fun at: 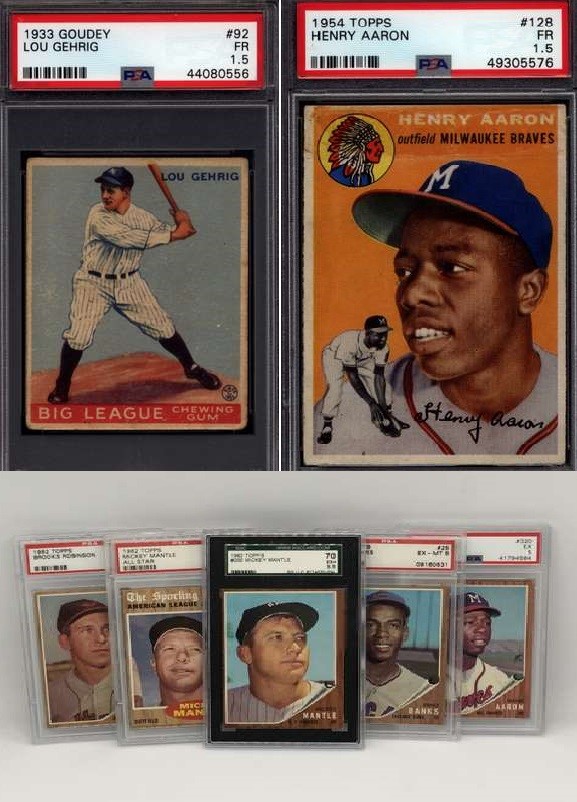