Mike Trout adds one more accolade to his already illustrious career - most valuable baseball card EVER.

When you hear "most valuable baseball card", instantly you think of the card which has demanded the most money since you've been alive - the T206 Honus Wagner.  "The Card" as the Wagner is often referred to has company now as the industry makes room for an insanely expensive Mike Trout rookie card.  Read how much the new King of Cardboard sold for this weekend. 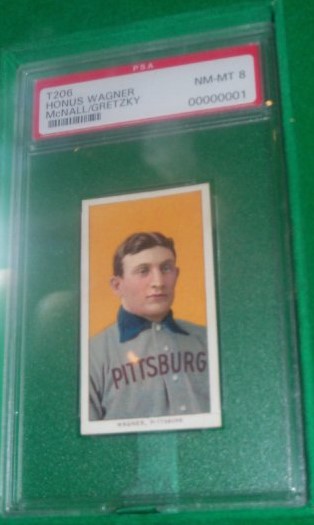 Since you've known about baseball cards, there has been one card at the top of the mountain.  More valuable than a Babe Ruth rookie card, recognized more quickly than Michael Jordan's 1986 Fleer card, and having more allure than a 1952 Topps Mickey Mantle has always been the T-206 Honus Wanger.

Referred to simply as "The Card", there are fewer than 100-known examples of the T-206 Honus Wagner.  Regardless of condition, the Wagner has always resulted in record-breaking sale prices.  No collector is truly certain why so few cards were distributed by the American Tobacco Company between 1909 and 1911, in an effort to promote various tobacco companies, but two theories have been drawn up.  Either Wagner did not want to promote tobacco use among children, or he wanted to be compensated for the use of his name and likeness on the card.  With the card being pulled from production, collectors have always been willing to pay premium prices

This blog is sponsored by JUST COLLECT where we specialize in buying vintage cards, autographs, and collections. If you have any of THESE cards, we'd love to chat!  We're always interested in Trout rookies or vintage tobacco cards.

While Mike Trout didn't have a dispute with the card distributor, only ONE Signed SuperFractor card was produced in 2009 - purposely.

Trout is on pace to be one of the greatest players in the history of baseball.  With sports card values soaring in price, the cost for a 1 of 1, super rare Mike Trout rookie card - SIGNED - was certain to pull in an astronomical amount at Goldin Auctions this weekend.

Just two years ago, the same card was purchased on eBay by "Vegas Dave" Oancea for $400,000; a zero away from the Wagner sale record.  The investment paid off like no other as when the auction closed, this Trout rookie sold for $3.93 million.

The Trout SuperFractor is now the most valuable card of all-time!  Can you believe a modern card of Mike Trout outsold a Wagner by 800K?! For 3.93 million, you could buy the Wagner AND a Babe Ruth rookie card - whoa!

Which Card Would You Buy?

If money were no object (wouldn't that be nice...), which card would you buy?  The vintage T-206 Wagner or the modern Trout?  Place both cards side by side, and 4 million dollars in your pocket - which ya takin'? Drop a note on our Facebook page and let us know!

While we don't have The Card ...or The New Card (yet?)... we do have plenty of of vintage and modern cards for sale!  If there is a certain player or card you're into, check out our JUST COLLECT website, give us a call at (732)-828-2261, or reach out to info@justcollect.com. We are also BUYING cards, too.  Fill out our FREE APPRAISAL; we'd love to hear from you!