Every Collection Has a Story Especially with Hall of Fame Players

The baseball world lost SEVEN members of the Baseball Hall of Fame in 2020.  As we say good riddance to 2020, let's remember a few of the greatest players to ever step foot onto a baseball field by sharing our favorite collection stories involving the legends we lost this year.  Every collection has a story; Hall of Fame collections make for captivating stories.

Seven of the greatest baseball players of all-time have sadly passed away in 2020.  The Baseball Hall of Fame has 333 members enshrined; a rare honor for a game that has seen over 15,000 players make it to the MLB.  To read about SEVEN of the greatest players of the game pass away this year is awful.  To honor the fallen greats, we're going to share our favorite story about a collection that includes these GOATs.

This blog is sponsored by JUST COLLECT where we specialize in buying vintage cards, autographs, and collections. If you have any cards or autographs from the Hall of Famers here, we're interesting in buying your collection - and hearing about the story of how you obtained the items! THESE cards are on our BUY LIST.

We have to start with Tom Terrific as Seaver long held the record for highest percentage of Hall of Fame votes at 98.84 %.  Around March of 2017, a local man contacted us about selling a collection of cards that included high-profile rookie cards.  The majority of the cards, including TOM SEAVER ROOKIES, were housed in a series of file cabinet drawers!

Love that beautiful 1967 Topps card #581.  When you read a story about Hall of Fame rookie cards, I bet you won't find any other collections being stored in a filing cabinet.  You can read the full story about the collection here.  Pics or it didn't happen, right? 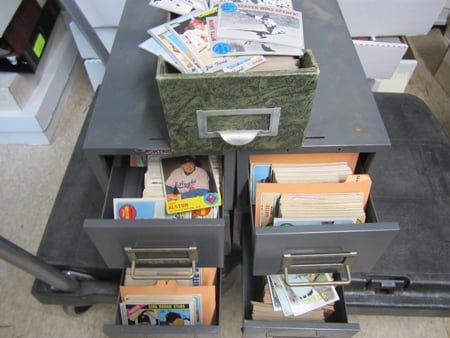 Imagine a 1965 rookie card of Joe Morgan that has lived in Japan, over in Europe, or here in the States - that's as unique as it gets.  We love a story about a collection purchased from an employee at the Department of Defense!  Being station around the world, the collector brought his vintage collection for the trips.  You can read the story about a traveling Morgan rookie here.

We've all heard the stories about how your mom or grandmother tossed tons of cards that would now net you a nice retirement.  How many Mickey Mantles did you or your dad lose to a Hefty bag as a kid?

In a story about a collection that Just Collect purchased, we got to hear about a collector's father working at recycling plant in Northern New Jersey where TOPPS would send their unused uncut sheets back in the 50's to be recycled.  The collector's dad would sometimes bring the uncut sheets home and would be pinned on the wall.  Sadly, mom threw out the cards like all other moms did back then.

Imagine - just imagine.  Perhaps gem mint, uncut Topps sheets with a 1953 or 1954 Whitey Ford just hanging on the wall.  How much would a sheet like that be worth today?  Maybe you're not concerned about the value but you just want that beautiful 1953 Topps design of a Whitey Ford card in your hands right now.  Shout out to the dad, though!  "Yep, totally recycled those cards..."  100 % would have done the same lol lol 😅

Things like that just don't happen today; nobody is throwing out uncut sheets.  What a cool, total 1950's story.

AL KALINE - ALL THE CEREAL

Remember when POST cereal put baseball cards on the back of boxes in the early 60's?  If you're not old enough to recall this, POST also inserted cards IN boxes around the early 1990's, too.  Those 1960's cards are fun to collect as it is packed with tons of Hall of Fame players, including Al Kaline.

We purchased a set of 159 Post Cereal cards from 1962 from a collector that ate enough boxes of cereal to get all of those cards himself.  As an 11 year-old kid, this hungry collector chowed down at least 26 boxes!  Cards were placed in panels of 6 on each box; that's a lot of cereal.  Check out the full Post Cereal story here.

LOU BROCK - DON'T THROW IT AWAY

The base-swiping king has his rookie card in the 1962 Topps set.  A collector reached out to us about selling cards from his childhood as he and his wife began to downsize.  Buying packs of cards for a nickel at the grocery store, the kid was smart enough to put the full 1962 Topps set away in a box.  Thankfully the young man wrote on the box: "My Baseball Cards – DO NOT THROW AWAY!"  Mom and dad didn't toss the cards, and a beautiful Lou Brock rookie card made way to our office.  Read the full story here.   Did you do the same thing, but mom STILL threw out the cards from when you were a kid?

It's not often we get a call to head out to a farm to review baseball cards, making this story stand out amongst our many purchases! A Dairy Farmer in New Jersey called Just Collect, telling us about complete baseball sets from 1958 through 1980.  All sets were nicely organized in binders. Since the sets were complete, all of the stars and rookies were there from Roberto Clemente, Hank Aaron, Willie Mays, Ted Williams, Pete Rose, Tom Seaver, Rod Carew, Nolan Ryan, Reggie Jackson, Thurman Munson, Mike Schmidt, George Brett, and of course, the great Bob Gibson.  We picked up a Gibson rookie on a farm!  Here is the cool story.

The knuckleball king just left us this week at the age of 81.  Rather than a baseball card, we're going to share a photo.  I had the pleasure of meeting Mr. Niekro at the Baseball Hall of Fame in 2017.  The Hall offers a special Night at the Museum tour to members.; an event to meet legends inside the museum! Hall of Famers are near their items inside the hall and kindly take photos with those that purchased tickets to the event.  Mr. Neikro was very nice and posed for this photo along with my wife and brother in-law.  Thank you, Mr. Neikro.