Patch Cards That Started the Insert Game - I Finally Own One 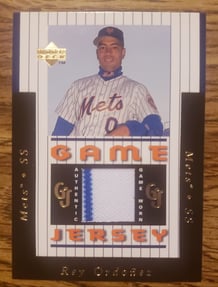 After nearly 23 years, I finally own the ORIGINAL baseball jersey card - the 1997 Upper Deck Game jersey.  Before game-used relics were inserted into nearly every few packs, UD put out a monster chase for a product that was never seen before.  Let's take a trip down memory lane with the OG jersey card; you won't believe the pack odds to find one.

The price of gas was about $1.20.  I had hair.  A crush on every Spice Girl was had at some point.  Oh, 1997 - you were a great year.   Aside flowing locks and the future Mrs. Beckham, that Summer also brought me the coolest baseball cards ever - the first cards with game-used jerseys in them!

This blog is sponsored by JUST COLLECT where we specialize in buying vintage cards, autographs, and collections. Interested in selling? If you have any not just the game-used cards, but if you have any of THESE cards on our BUY LIST, we'd love to hear from you!

Baseball card inserts were non-existent when we were kids.  A glossy all-star card in a Topps cello pack was pretty much all we had.  It wasn't until 1992 when card companies ramped up their insert cards with Topps Gold. GOLD cards?!  A single gold card was inserted into a box of '92 Topps baseball.  You were king of the world if you pulled a Brien Taylor gold card back then.  Soon came Black Gold, Die Cuts, Holograms, and even autographed cards into packs!  Then one day in 1997, Upper Deck changed the game - UD put game-used jerseys ON cards 😦

For the first time EVER, UD cut up a game-worn jersey that was worn by the player in the 1996 season.  These cards are known as GAME JERSEY.

EIGHT HUNDRED packs.  Let that number sink in for a second.  UD baseball packs contained 12 cards and retailed for $2.49.  On average, you'd have to spend $1,992 in packs to pull 1 GAME JERSEY.

Compare these numbers to the best relic product in the game today - Panini National Treasures.  IF you're able to find a box at cost, National Treasures baseball in 2020 sets you back around $550 for 8 cards.  Most likely 4 of those cards have jerseys on them.  You could buy FOUR boxes of the TOP baseball product and get 16 jersey cards and probably 10 autographed cards.

I still chased those cards back in 1997, though.  Heading to a local card show in Albany, NY., I'd pay my $2 entry fee to get in and bought those $2.49 packs.  I stood in the card section of Walmart looking at the box with Griffey Jr on the cover and did the math of buying a 20-pack box and how many I'd need to buy before getting a GAME JERSEY.

GAME JERSEY cards don't have have jumbo patches with letters or multiple stripes, no 1 of 1's - just a simple swatch.  However, these cards were the FIRST EVER jersey cards in any product.  To own anything that Ken Griffey Jr or Tony Gwynn, future Hall of Famers would be the coolest card in my collection.  If you're wondering who Rey Ordonez was, he was a stellar defensive short stop for the Mets, winning 3 gold gloves before breaking his arm.  After the arm break, Ordonez couldn't flash the leather any more.  In hindsight, maybe adding the other NY team's short stop in 1997 make the set that much more incredible...Ordonez had game:

Without the success of Game Jersey, there would be no National Treasures.  Patch cards are so common these days, you can even buy a Mike Trout jersey card for $20.  I sound like an old man, but kids these days may not appreciate what it's like to open up 800 packs for a simple jersey card!  Right now, the Griffey  Game Jersey will set you back about $2,500!

For Christmas this year my best friend, Gary, gifted me a 1997 Upper Deck Game Jersey card 😁  No need to buy 800 more packs - I finally have a card that I chased so many years ago. 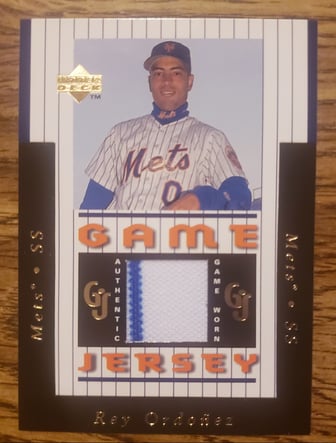 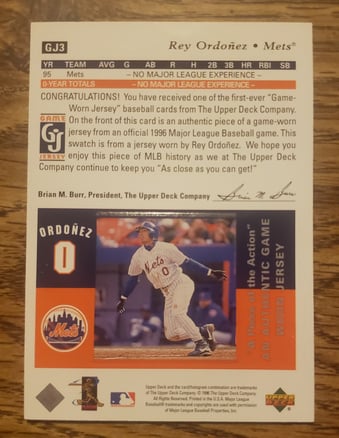 If you're chasing cards from any year or sport, check out our sister company, Vintage Breaks!  VB breaks packs and boxes from the 50's to brand new product just like National Treasures.