A friend of mine owns a pair of incredible Babe Ruth autographs that belonged to her father.  The family knows how dad obtained the autographs but has been trying to track down when and where!  Perhaps you may help solve a family mystery as we fill in the timeline.

This week a friend reached out with a question about her not one but TWO Babe Ruth autographs. Having been in her family for roughly 80 years, the signatures from the baseball icon have a bit of mystery surrounding them. Both Ruth signatures were given to to my friend's dad from The Babe himself but exactly when and where have eluded the family for decades.  I thought you could lend a hand in helping the family out with the mystery! 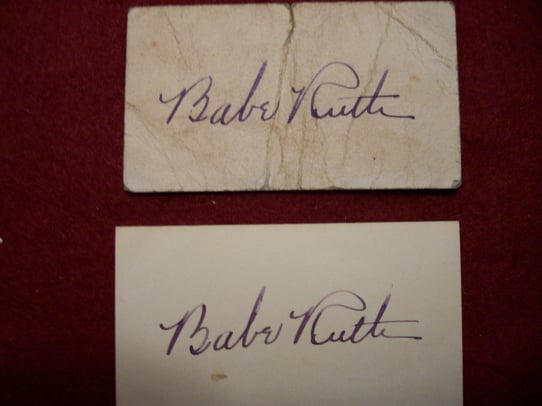 HISTORY OF THE BABE RUTH AUTOGRAPHS

When the father was a young boy, he was hit by a car in New York.  Babe Ruth came to visit the child in the hospital where he signed not one, but TWO autographs.  After the father passed away, the autographs were handed down through the family.  The autographs sat in the family's safe until my friend was old enough to understand the value of the treasures.  As she told me: "You don't want a teenager showing off the autographs and getting their hands all over them!"

That bottom signature is so bold; looks like the card was just signed yesterday.  The top card is "well loved" but a Ruth is a Ruth - it's gorgeous either way.

MYSTERY OF THE BABE RUTH AUTOGRAPHS

First the history and now the mystery!  My friend's father passed away in 1986, and there are no other surviving members aside from the kids that have been able to learn WHEN and WHERE dad met Babe Ruth to get both autographs - or why he was given TWO signatures from the Babe!  Let's put on our sleuth hats and see if we can crack a family mystery, shall we? We can put together a timeline to at least narrow down the range in which to look!

Ruth always made time for kids his entire life, especially those in hospitals or orphanages.  Ruth himself spent nearly his entire childhood at St. Mary’s Industrial School for Boys in Baltimore, MD.

The stories I hear are that Ruth would bring stacks of pre-signed index cards to the hospitals and orphanages he visited so he could actually sit and talk with the kids and not spend that precious time signing.

The most famous visit was with Johnny Sylvester in 1926. After being seriously injured by falling off of a horse, Sylvester was gifted autographs from the New York Yankees to lift his spirts. Ruth scrawled on the baseball "I'll knock a homer for you." Flashforward to the afternoon of game 6 of the World Series Babe when Babe did the signed ball one better by sending a hand-written letter to Johnny stating that he would try to hit homer for him, maybe even two.  What happened the next game, game 7?  Ruth DID hit a home run.  After game 7, Ruth personally visited little Johnny in the hospital.  The baseball Babe signed for Johnny even came up for sale once.

There are PSA authenticated photos even in the year of Ruth's death of The Babe visiting children in the hospital - you can see one such photo here.

The family believes their dad was hit by the car in Brooklyn around or just before 1940. From this we can exclude Babe Ruth's playing days.

A few well-known Ruth appearances outside of NY can help whittle down dates, too.

As the family believes the father was in a Children's hospital in Brooklyn, my best guess would have be during the Summer of 1938 as Babe Ruth signed on to be a coach with the Brooklyn Dodgers!

We can count out most of the Dodgers' road games in 1938; Ruth wouldn't be able to visit a Children's hospital in NY if he were on the road. It is plausible that Ruth could have visited a hospital in Brooklyn after a game against other teams in NY such as the Giants. We can exclude the following days:

It's hard to figure out which hospital in Brooklyn the Babe would have visited, but here is what I found:

The Dodgers played their 1938 games Ebbets Field at 55 Sullivan Place.  I THINK the hospital closest to the field would have been:

That MIGHT be it! Brookdale hospital in the Summer of '38, excluding the days above!

MAYBE YOU CAN HELP

We have a potential hospital and a handful of dates that Ruth would have been around Brooklyn in the Sumer of 1938.  Maybe you were handed down an autograph from your parents or relatives that were also in the hospital in our date range and have more information on when Ruth stopped by.  Perhaps you have a relative that worked in the hospital and has a good Ruth story.  If you have any details that could help my friend out, that'd be great!  Even if not, and you just have an awesome Babe Ruth story, we'd love to hear that one as well :)  Just drop us a note and say you read the Babe Ruth autograph blog on JustCollect.com and want to help.

We don't just try to solve family mysteries! Just Collect is always buying vintage sports and non-sports cards from 1879 to 1979 as well as select modern cards. If you have a collection that you are considering selling, ESPECIALLY BABE RUTH AUTOGRAPHS, contact us today to discuss or get our industry-leading purchase offer. If you have a collection that you want appraised, please contact us and we would be happy to discuss your collection and help you understand the real cash value of your collection in the current marketplace. Check out our buy list blog here.

We've purchased Babe Ruth cards previously, too.  Check out this story about a mom that wanted to sell her Ruth collection to buy her daughter something fun for Christmas!