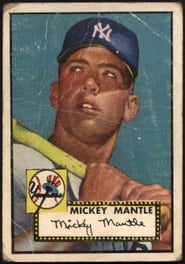 Where Do you Get Your Collections?

Regular readers of our blog know that we've discussed this question many times, but we still get asked over and over again about where and how do we find so many great collections.  Just like the old joke about a visitor on the streets of New York City asking a stranger, "How do you get to Carnegie Hall?" and the person that was asked responds "Practice!"

A collection that we recently purchased from a local man is no exception. It wasn't exactly an unannounced walk-in, but it was very local and we met in our office.

A New Jersey man called our office to discuss a collection of cards that he had inherited from his father.  The collection consisted of mostly Topps cards from 1952 through 1956.  He was interested in getting them appraised and was also considering selling them if he felt that he was getting a fair offer.  We received some images and after some brief questions, the gentleman scheduled an appointment to meet with one of our specialists at our Somerset, New Jersey office.

One of our specialists met with the gentleman and talked about about the history of the collection.  The cards that he brought were from his father's collection.  He collected cards as well, but wasn't ready to consider selling them, yet.

During the discussion about his father's collection, the gentleman mentioned that he also collected and that he still had his collection, but that he had started to organize and research the cards that he had found so far from the days when his dad collected.  He wasn't exactly certain of their value, but felt that he had a pretty good idea after doing some research online and checking auction prices and values and trying to match up cards and conditions.

We went through the entirety of the collection that he brought in and discussed the condition of the cards and the general values based upon the condition of each of the stars, the commons and the scarcer series cards.

It Wasn't All Topps 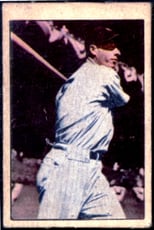 The collection was virtually all Topps cards, but there were some exceptions.  A 1952 Berk Ross Joe DiMaggio card was included in the collection which seemed odd based upon the fact that the gentleman said that his father despised the Yankees.  This dislike of the Yankees was one of the reasons that he said that the Mickey Mantle cards were in lesser condition than the rest of the cards since he didn't really care for him that much. 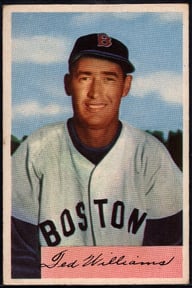 Although there were very few Bowman cards in the collection, one of the most difficult and most desirable cards from the entire Bowman run was included.  it was a very nicely centered 1954 Bowman #66 Ted Williams.  The card is considered a short print as it was pulled from production very early due to a contractual matter as Williams had signed an exclusive contract with Topps who used him as the first and last card in their 1954 Topps Baseball Set (#1 and #250).  The #66 Williams card was pulled and was replaced in subsequent print runs with Jimmy Piersall, who ironically already had a card in the set (#210) and the inserted #66 Piersall was identical to the #210 except for the card number. This was the last time that Ted Williams appeared on a Bowman baseball card.

There were some also some great cards from 1953 through 1955 Bowman that were highlighted by Willie Mays, Pee Wee Reese, Ernie Banks, Bob Feller, Roy Campanella, Duke Snider, Gil Hodges and Billy Martin/Phil Rizzuto on the 1953 Bowman Color card.

And Now, The Topps Cards 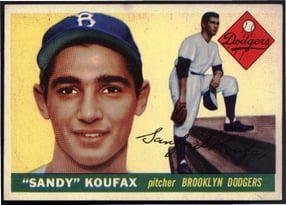 The gentleman has a few star cards from 1955 Topps and 1956 Topps including a great looking 1955 Topps #123 Sandy Koufax rookie card.  The frustrating part was that he said that there were several binders that he knows that he put away that contain several hundred more 1955 and 1956 Topps cards (and maybe 1953 and 1954 Topps).  As he goes through his storage and starts to widdle down the stuff that has been put away, he said that he was confident that the binders would show up and that he will contact Just Collect when he finds them.

Several cards that he did bring from the 1953 through 1956 Topps run included:  Willie Mays and Mickey Mantle from 1953 Topps, Willie Mays, Tommy Lasorda and Yogi Berra from 1954 Topps, Jackie Robinson from 1955 Topps and a nice selection of stars from 1956 Topps that featured Ted Williams, Hank Aaron, Sandy Koufax, Ernie Banks and Al Kaline.

The 1956 Topps cards were consistently the best condition cards in the collection as they were very well centered and had relatively strong corners.  We're hoping that the seller finds the binders and that the 1956 cards are similar to the stars that were included in this portion of the collection. 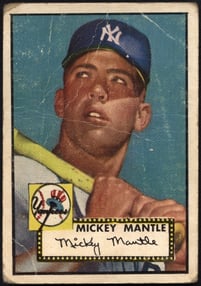 Obviously, even in relatively poor condition, the key to this collection was the 1952 Topps #311 Mickey Mantle card.  While technically in POOR condition, the card has great centering and terrific eye-appeal and presents much nicer than it will grade from a third-party grading service.  This was not the only 1952 Topps card in the collection, however.  The collection included more than 40 low and mid series cards including #261 Willie Mays and more than 20 cards from the high number series including #313 Bobby Thomson, #400 Bill Dickey and #406 Joe Nuxhall.

The interesting thing to note is that the high number cards were the better condition cards from the group of 1952 Topps although the Mantle was the softest of all of the cards.

The Harder Than Expected Decision

After a full evaluation, we prepared a very fair offer for the gentleman and we eventually agreed upon a purchase price for the collection.  Even after agreeing on a price, there was a long hesitation by the seller and eventually he balked.  A tear welled up in his eye and he said that he didn't realize that it would be so hard to let them go and that he thought that he was ready to let them go.  We told him that we understood and that if he needed to think it over or discuss it with family, that we understood.  As much as we prefer to close a deal, especially when we've already made an agreement, we understand that some people need to process things differently.  He asked how long the offer stood and we told him that our offer was good as long as the collection was the same and in the same condition within reason.  That's one of the advantages of vintage cards, they're not really susceptible to major price swings in a short period of time.  We don't have to worry about Mickey Mantle getting suspended for PED usage or Sandy Koufax losing a year and a half while undergoing Tommy John surgery.  That's the bane of the modern collector and dealer.

The gentleman, after making the decision, asked about our interest in his collection.  He had collected and completed most of the sets from the late 1960's to pretty much the present and recalled only his 1973 Topps Set being incomplete as he knew that he didn't have the Mike Schmidt rookie card.  When he finds the commons binders and organizes his own collection, we'll be meeting with him to value the balance of both collections and hopefully, we'll have another purchase story to share with you and another satisfied seller.

We set up at The National Sports Collectors Convention every year and this year, it will be at the IX Center in Cleveland, OH and it has been in Chicago, Atlantic City and Baltimore in recent years. Additionally, we travel to the Sports Card and Memorabilia Expo in Mississauga, Ontario for those of you in the Toronto area that want to meet with us in Canada. 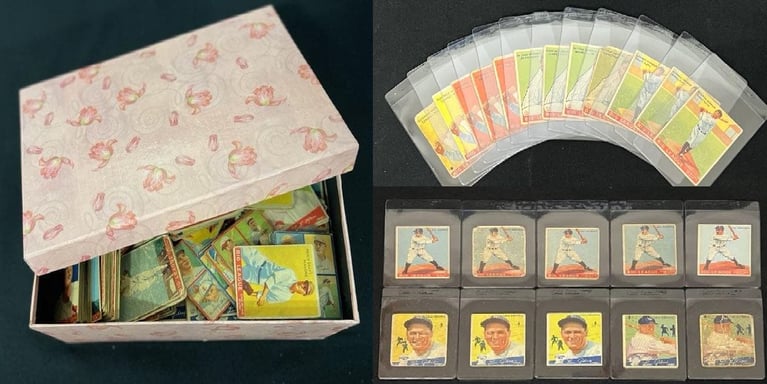