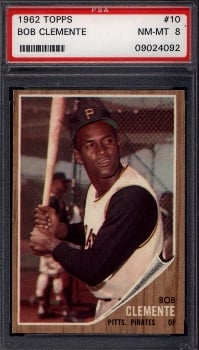 Where the Allegheny River and the Monongahela River unite to form the Ohio River was a multi-use stadium opened in 1970 and proved to be a hotbed for both baseball and football for the next several years.
The Pittsburgh Pirates represented the National League in the World Series in 1971 and again in 1979, winning the World Championship both seasons.

The Pittsburgh Steelers, led by Chuck Knoll, went from a 1-13 season in 1969 to being the terrors of the NFL through the 1970s. They won the Super Bowl 4 times during the decade. The Steelers, led by quarterback Terry Bradshaw, hoisted the Lombardi Trophy after the 1975, 1975, 1978 and 1979 seasons!

We received a call from a gentleman that had grown up in the Pittsburgh area during this iconic era.  He rooted for the Pirates and Steelers and later for the Penguins in hockey and built a collection of many of the heroes of the era.

Luckily, the collection that he was interested in selling was entirely PSA graded, so he forwarded the list of cards and grades and our specialist put pen to paper and worked out the values and we made an offer that was eventually agreed upon.  Rather than shipping, because of the value, the collector wanted to deliver the collection to our Somerset, NJ office and also wanted to bring some additional cards that he had that he was interested in selling.

If you were growing up in Pittsburgh in the 1960's, odds are pretty strong that you were a Roberto Clemente fan. The collector of this group of cards was no exception. He put together a collection of PSA graded Roberto Clemente cards ranging 1957 through 1973 and ranging from PSA 7 to PSA 8. The only base cards missing from the Clemente collection were the 1955 Topps rookie, his second card from 1956 and cards from 1963 and 1972. All of the cards from 1960-1973 were graded PSA 8. 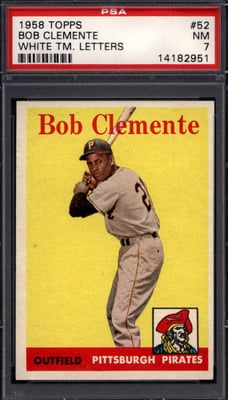 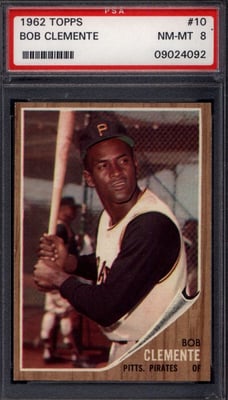 In addition to Clemente, there were a few other Pirates favorites including Willie Stargell and Andrew McCutchen.

The collection contained a few cards of players that were not Pittsburgh related. Many of them are arguably the greatest players at their respective positions. Jim Brown, perhaps the greatest running back in the history of professional football is featured on his 1958 Topps rookie card that was graded PSA 6 EX/MT. Dave "Deacon" Jones, one of the greatest defensive ends ever, stands out on his 1963 Topps rookie card graded PSA 8 NM/MT. Bears teammates Gale Sayers and Dick Butkus are found on their 1966 Philadelphia rookie cards graded PSA 7 NM and PSA 5 EX, respectively. 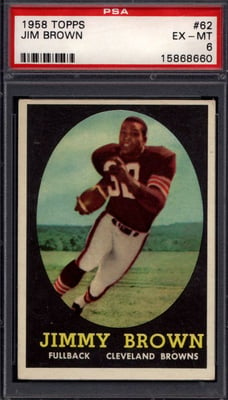 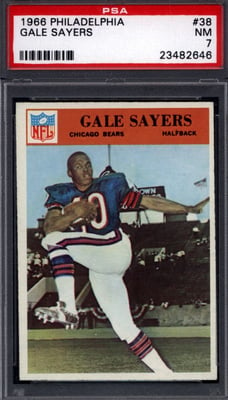 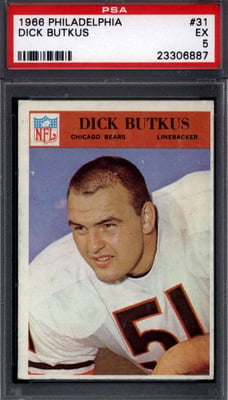 Controversy surrounds O.J. Simpson, but his 1970 rookie card is found here graded PSA 8 NM/MT while the Bears Walter Payton is captured on his 1976 rookie card which has been graded PSA 8 NM/MT. Tony Dorsett, a standout at the University of Pittsburgh before his Hall of Fame career with the Cowboys is proudly represented on a PSA 9 MINT example of his 1978 rookie card. Two other All-Time great running backs were represented by Earl Campbell (1979 Topps) and Barry Sanders (1989 Score). 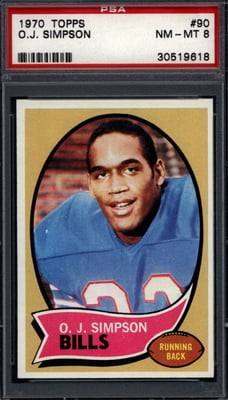 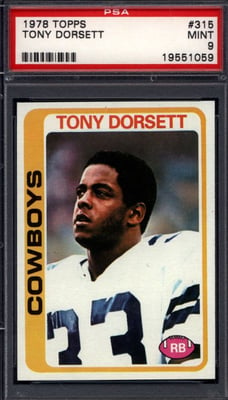 Other Hall of Fame Rookies 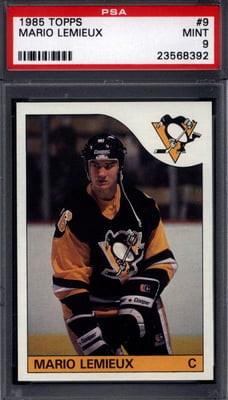 There were a few other rookies that had both a Pittsburgh vibe and a G.O.A.T. feel to them. Two of the greatest quarterbacks in NFL history, Dan Marino and John Elway, are featured on their 1984 Topps rookie in PSA 8 and PSA 9, respectively. The Steelers were well represented by: Jack Ham, Franco Harris, Mel Blount, Lynn Swann, Jack Lambert, Mike Webster and John Stallworth.  And what Pittsburgh collection would be complete without a Mario Lemieux rookie card?  This one has one, too!

And there were a few other Steelers cards including Antonio Brown and Heath Miller.