We share stories about collections that we buy and some of the interesting travel that it takes to get there.  Over the years, we've figured out some of the best ways to get to places and places to avoid while traveling there.  After plenty of travel this winter for collections from Oklahoma to Massachusetts, we had a collector contact us from just outside of Chicago with a small group of 1933 Goudey cards and a few handfuls of other Hall of Famers.  We reviewed the images of the collection and worked out some preliminary values based upon the condition of the cards that were viewed in images that the seller provided us.  We discussed the values and what our tentative offer would be and we had a meeting of the minds and a preliminary agreement in place.  However, the volume of the collection and assumed value of the balance of the newer cards in the collection was one that made shipping it a concern.  After reviewing the values and the sellers proximity and access from O'Hare airport, we decided that it would be easiest to fly out, rent a vehicle and drive the 20 or so minutes to the seller's home to review and finalize the purchase of the collection.

Travel and evaluations are something that we're pretty familiar with and time in the car (truck) or in the airport comes with the territory.  This collection presented the rare opportunity of a quick trip in and out despite being about a third of the way across the country.  Many times, even when flying in, there is a decent amount of travel or navigating through busy cities or around congested airports.

This collection and trip came together pretty quickly.  The images were of cards that had a pretty consistent range of grades and the evaluation was rather easy and left little room for upside or downside, so our preliminary offer was pretty much a given.  The seller agreed with our evaluation, valuation and offer, so we had an agreement pending in-hand inspection.

We recently purchased a nearly complete set of 1933 Goudey cards that had been trimmed from a collector north of Boston, MA. This Chicagoland collection also included a nice assortment of 1933 Goudey cards, and while a much smaller group, it featured cards that had not been trimmed. The Goudey portion of the collection consisted of about 50 cards with more than half of them being Hall of Famers. Included in the Hall of Famers were two Babe Ruth cards and one Lou Gehrig card. Other stars included Tris Speaker, Bill Dickey, Bill Terry, Tony Lazzeri, Waite Hoyt, Rogers Hornsby, Hack Wilson and many others. 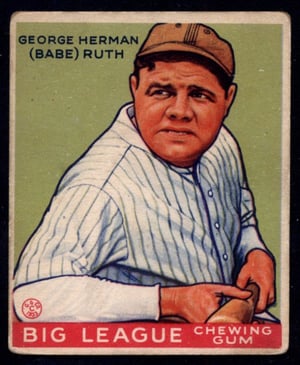 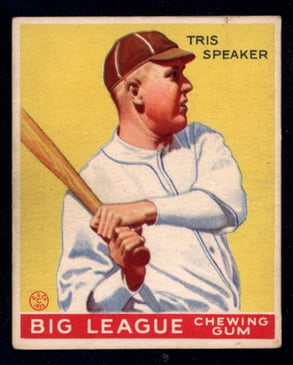 There were also plenty of other star cards including Ted Williams, Mickey Mantle, Hank Aaron, Willie Mays and of course, Mr. Cub, Ernie Banks!  Additionally, there were boxes of other cards including several hundred vintage from the 1950's and early 1960's as well as cards as thousands of cards from the 1970s. 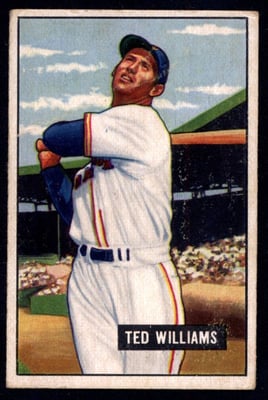 How Did They Get There

Reviewing the collection, there were plenty of boxes with assorted cards, stars, vintage commons, as well as boxes broken down by year.  However, in one small box, which contained maybe 550-600 cards, there was a run of commons from the 1960's and within this box, there were several groups of commons from 1961 through 1968 that featured smaller groups of minty fresh cards.  They stood out like a sore thumb mixed in with other cards ranging from VG to EX.  Anyone that has opened a box with high grade cards knows exactly what they look like and how much they can stand out -- especially when compared to cards that exhibit moderate to extreme wear.

When asked if the remembered how they came about, the seller said that in the early 1980's, he used to travel to a local swap meet and spend a couple of dollars for a small lot of commons.  He thinks that these small groups of really sharp cards may have come from those swap meets.  Regardless, it was pretty cool finding some really sharp commons -- ranging from about 20 to 50 of each year from 1961 through 1968.

While we always want to buy entire collections, sometimes space may limit our ability to buy it all. In this case, there was about another 15,000 cards and unopened wax packs that we would have normally made an offer on and attempted to purchase, but the travel restrictions made it highly improbable.

We reviewed the extra cards (mostly mid 1970's to mid 1980's) and talked about the value of this portion of the collection and the best way for the seller to liquidate them for the highest possible return with the least amount of inconvenience. He seemed appreciative and we really believe that in this case, he will do better than what we could've paid him for the cards because of the expense of returning them to our Somerset, NJ office.

Chicago is known as "The Windy City."  Imagine the irony of being delayed in Chicago because of excessive winds back home in New Jersey.  A storm front going through the east coast caused massive delays into the NY/NJ area airports and delayed our flight out of Chicago nearly 5 hours.  Eventually, we got on the plane and returned home safely with another collection!