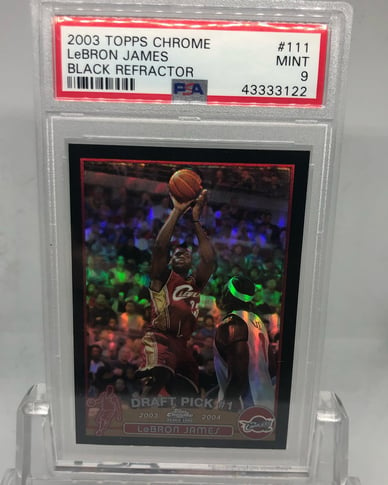 Would you be able to turn down $50,000 for a basketball card?  A customer did just that, flat out turning down a few celebs along the way, too, live during a break!

This blog is sponsored by JUST COLLECT where we specialize in buying vintage cards, autographs, and collections.  We'd very much be interested in LeBron rookies and autographs. THESE cards are on our BUY LIST if you're interested in selling.

Don't forget about our big EVENT!  Win one of 30 prizes including cards and vintage wax HERE. 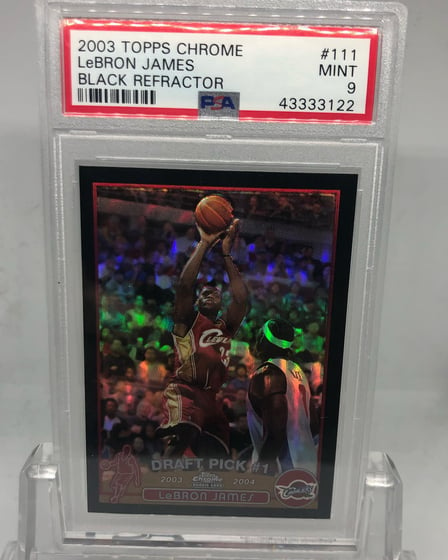 As you know, card values have soared in recent months, and a player like LeBron James is no exception to rising card values.  As there are only 68 cards known to exist in a grade of 9, this exact card commands top dollar.

Spots were sold individually.  With 165 cards in the set, 165 spots were sold.  The list was randomized and whichever customer was lucky enough to land on spot #111 would take home the LeBron rookie.  EVERYONE wanted in on the break!

Just to name a few of the well-known, celebrity card collectors in the break were:

The breaker, J5, set up the break so when spot 111 came up, he hid the name from viewing for just a moment and called the winner live during the show.  On the other end was a loyal Vintage Breaks customer, Rob Giese!

Before Rob could say a word, offers during the break were:

My favorite quote is from Gary V to Rob.

Though, Rob did just hit a HUGE card, apparently worth more than 50 grand.  Estimates now are around $70,000!

Rob did say he's willing to talk later but wanted to go get a drink and watch Vintage Breaks first.

If you're wondering how some of the other celebrities did or where other big cards went to:

Thank you to J5, the owner, Leighton Sheldon, the whole crew at Vintage Beaks including Doug, Sam, Emily, all the loyal customers, Josh, Jason, Gary V, and everyone else that made this set break possible.  Congrats to you, Rob G.!

Here is the video of the LeBron call

Would you turn down those offers?  Let us know!