The ONLY known photo autographed by Shoeless Joe Jackson of the 1919 White Sox has been sold for an astonishing price!  See the the 1.47 million-dollar piece of memorabilia, and learn why this is the only signed photo in existence.

A record price was set for a signed sports photograph.  The bid of 1.47 MILLION dollars was for the only known autographed photo of Shoeless Joe Jackson.

The 1919 White Sox team was accused of throwing the World Series that season in exchange for money paid by gamblers. Rumors were that the players were unhappy with the team owner over money. Back then, baseball players could not change teams without permission from their current team, and a player that refused a contract could not sign with another team. Eager for extra money, going into the World Series against the Cincinnati Reds, eight players of the White Sox agreed to, or knew of, taking money from gamblers to purposely lose the series. Each player would have taken home $5,000, which was double their baseball salaries.

After dropping the World Series by a tally of 5 games to 3, the fix was leaked out and soon the public knew. The eight players were brought to a trial, and the Jury found all players not guilty.  Regardless of the jury's decision, the Commissioner of Baseball ,Kenesaw Mountain Landis, banned all eight players from baseball of life:

Here is a very useful timeline of the World Series, trial, and what happened to each player afterwards.

"Shoeless" Joe picked up his nickname after playing a game in a pair of cleats that weren't broken in yet.  With sore feet, Jackson played the rest of the game in only his socks. "Shoeless" was on his way to a Hall of Fame career in 1919.  His .356 lifetime average still stands as the third-highest in baseball history. There has been much debate of Shoeless Joe's involvement as he was the best player in the 1919 World Series.  Jackson had 12 hits, batted .375, scored 5 runs, had 6 RBI, and hit the only home run of the series.  With the lifetime ban, Shoeless Joe would never wind up in the Baseball Hall of Fame.

What you may not know about Jackson is that he was illiterate; he could not read nor write! Jackson avoided signing as much as he could. He could pretty much only write his name. That's what makes this signed photograph so very rare; it's the only one ever known!

The photograph was taken by Frank W. Smith in Spring Training 1911 in Louisiana. The photograph added the inscription you see of "Alexandria Mar 1911."  When Jackson signed the photo is unknown. 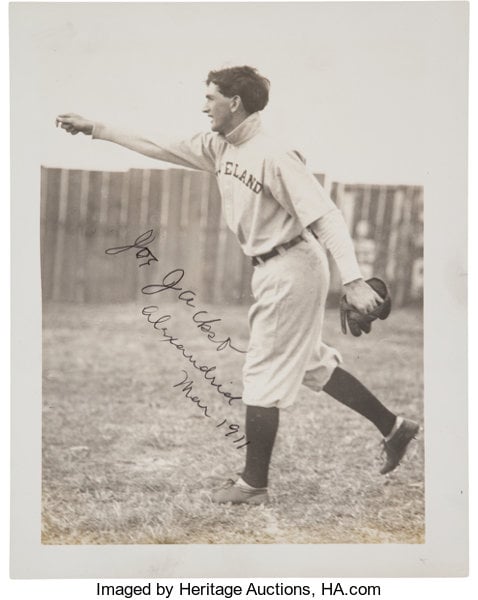 The world has changed so much since 1919.  The TV didn't exist yet. Not even half of the homes in the US had electricity yet. One thing that hasn't changed - baseball does not stand for gambling in the game - just ask Pete Rose.

We're very familiar with buying Shoeless Joe Jackson items!  We purchased a T206 Shoeless Joe in our West Virginia Attic Find that you can read about HERE.

We love to buy collections with Shoeless Joe including the 1914 Cracker Jack cards or the 1940 Play Ball set. If you have any Shoeless Joe items, we'd love to hear from you!

Just Collect is always buying vintage sports and non-sports cards from 1879 to 1979 as well as select modern cards. If you have a collection that you are considering selling, contact us today to discuss or get our industry-leading purchase offer. If you have a collection that you want appraised, please contact us and we would be happy to discuss your collection and help you understand the real cash value of your collection in the current marketplace. Check out the Just Collect buy list blog here.

We've run into a wide range of people and collections over the last 25 years. Although Just Collect is known for buying vintage sports cards and especially vintage baseball cards, we are also extremely interested in buying non-sports cards, too!

Every collection and every collector is different and we treat EVERY collection with the respect and attention that we show for our own collections. We understand that many have put their heart and souls into building their collections. So when you're ready to sell, we understand the feelings that you're going through and will work with you to help you reach a decision that is a WIN/WIN, because if you're not happy, we're not happy.

Whether you have vintage cards or modern wax you want to sell, you can reach out to us any time!