After losing ALL of his sports cards to friends in card-flipping games as a first-grader in the 1950's, a collector practiced and honed his skills to the point he not only won his collection back - he won thousands of more cards!  In the pile of winnings was a stack of 1961 Fleer basketball cards that Just Collect is proud to have purchased.  Rookie cards of Wilt Chamberlain, Jerry West, Oscar Robertson, and other star cards highlight The Flipped 1961 Fleer Basketball Collection.

Remember flipping sports cards as a kid?  Maybe your dad told you stories of how he and his friends would hang out and try to win each other's cards in games of flip!  A collector reached out to me on the Just Collect FREE appraisal page here with a nice collection of 1961 Fleer basketball cards and a heck of a backstory; he won them all by flipping!

In the 1950's, 60's and into the 1970's, kids would challenge friends in various games in order to win their sports cards.  Sometimes you'd walk into your friend's living room with a stack of 50 of your favorite cards and go home with NOTHING, while other days you'd bring home enough cards to complete your sets.  It was all in the art of the flip!

There are various names of card-flip game names depending on where you're from.  Much like calling a soda "pop" or a sub a "hoagie" flipping has different names but regardless of the name, you know the rules!

Two players hold a stack of cards in their hands and then flip a card to the floor.  If the card lands heads up (stats on the floor), both cards are yours!

Players each throw a card towards a wall.  Without the card touching the wall, the player that threw their card closest to the wall wins all thrown cards!

The opposite of nearsies - players must hit the wall with a thrown card.  The card must bounce off the wall, back towards the players.  The player that can bounce their card back furthest from the wall wins all thrown cards!

A collector named Paul reached out to me on JustCollect.com and mentioned he had a collection of 1961 Fleer Basketball cards with key rookies of Wilt Chamberlain, Jerry West, Oscar Robertson, and other stars and Hall of Famers.  The coolest part about Pauls' stash: he WON them in flipping games!

When Paul was in first game in the 1950's, he tried his hand at some of the card-flipping games above.  Unfortunately, Paul lost ALL of his cards - every single card!  Let's go back to the 1950's and imagine the type of cards friends won off of Paul: 1952 Topps baseball and the Mickey Mantle rookie card, 1958 Topps football with a Jim Brown rookie , or 1957 Topps basketball cards with a Bill Russell rookie.  Just imagine- and all gone.

Paul's mom stepped in and bought a new box of about 100 cards (go, mom!) that he used to practice and hone his flipping skills.  By 1961, Paul started to be a real flipper.  Instead of sitting in front of the TV watching Mister Ed, going to the theatre to see the new 101 Dalmatians movie, playing with an Etch-a-Sketch, or listening to Ricky Nelson the radio (fun fact: Ricky was the brother-in-law of NCIS actor, Mark Harmon!), Paul practiced flipping. When Paul was ready, he challenged his friends, and turned his 100 cards into 2,500 cards!  In the pile of Paul's winnings was a great stack of 1961 Fleer Basketball.

Wilt Chamberlain still owns the record for most points scored in a single NBA game of 100 points in 1962.  For perspective, the second-most points scored was from Kobe Bryant at 81 points done 44 years after Wilt's 100.

Jerry West was such a good basketball player, the NBA still his likeness for the league logo!

The colorful background mixed with black and white action shots of the players make for such a cool set.  We have a great article on the whole '61 set you can learn more about here. 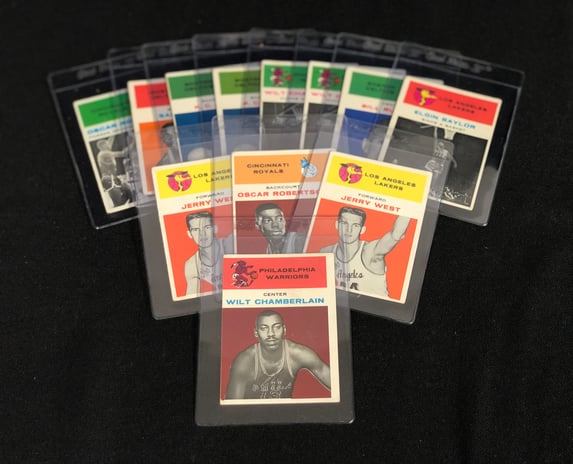 TWO Jerry West rookie cards flank The Big O!  The Wilt Chamberlain card is a bit off-center but I couldn't resist making an offer to Paul for his 1961 Fleer basketball cards.  The history behind the collection is just too cool; brings me back to a kid when wanting to flip my cards!  You can tell that Paul got great at flipping not only because of the cards he won, but the condition; the corners aren't really dinged and that's hard to avoid when flipping a card.  If you're not sure how to judge the condition of your cards, we have a video and some examples on how to evaluate condition here.

How could I NOT line up the big rookie cards against the wall like Paul may have when he was going to try and flip them:

I resisted flipping Paul for the collection, but it wasn't easy!  Instead, I made a cash offer that Paul was happy with.

As the US begins to slowly open up and Covid-19 vaccinations are rolling out, I hope to travel more.  Before the Pandemic, I would have hoped into the Just Collect Mobile to see your collection in-person.  Until the Pandemic is over, I can offer a few options:

If you choose to mail your cards, I will evaluate your cards for FREE still. If you choose not to sell the cards, I'll ship them back shipping fees paid by us!  Paul sent his collection via FedEx with 2-day shipping, fully insured, all covered by me so he would feel comfortable shipping the cards. Contact the office or myself to set up this option.

If you're willing to wear a mask when you and I meet, and you can make the trip here - we can make a deal at the office.  Recently I met a father-son duo that drove eight hours from Virginia to meet me to sell a Michael Jordan rookie card stored in Tupperware since 1986 - great read here.

I keep a LIST of card shows we'll be attending to buy and sell!  Come stop by our booth!  I just went to the Chantilly, VA. card show and plan to be at Philadelphia Valley Forge show in a few weeks.

After my initial offer to Paul, I paid him cash.  If we agree on a deal, I'll wire you money, send a check, or pay in cash.  Want me to draw you a personal NFT? I'll get a set of markers our right now.  If you want to FLIP, WE'LL FLIP!

I am very familiar with buying 1961 Fleer basketball collections.  In 2017 I purchased the 1961 Fleer Basketball Amtrak Collection you can see here.

Just Collect is always buying vintage sports and non-sports cards from 1879 to 1979 as well as select modern cards. Your collection doesn't have to be all vintage basketball like this collection either!  I recently bought a graded card collection that was filled with rookie cards of Kobe Bryant, Tom Brady, and even Hulk Hogan that you can see here.

I've run into a wide range of people and collections over the last 25 years. Although Just Collect is known for buying vintage sports cards and especially vintage baseball cards, I am also extremely interested in buying non-sports cards, too!

Every collection and every collector is different and I treat EVERY collection with the respect and attention that we show for our own collections. I understand that many have put their heart and souls into building their collections. So when you're ready to sell, I understand the feelings that you're going through and will work with you to help you reach a decision that is a WIN/WIN, because if you're not happy, I'm not happy.

Whether you have vintage cards you won by flipping in the 1950's, graded cards or modern wax you want to sell, you can reach out any time!