A Special Tour Allows You Access to Historic Items

Have you ever wondered what it's like to hold Lou Gehrig's jersey?  Perhaps swinging Mike Trout's actual bat is something you dream of.  Did you know you can ACUTALLY do things like that? Check out how you can hold history in your hands at the Baseball Hall of Fame.

If you've ever strolled though the Baseball Hall of Fame in Cooperstown, NY. and gawked at the amazing pieces of baseball history, I'm sure you've also thought what it would be like to actually hold what hides behind the glass.  Maybe a cap that Babe Ruth wore, a jersey that Hank Aaron once took the field in, or swinging the same bat that a current great like Aaron Judge is something you dream of.  You can't actually do that though, right?  The Hall of Fame would never open up a case, pull out a priceless artifact, and let you hold it.  ..or would they?  YES, you can actually hold items from the HOF!

This blog is sponsored by JUST COLLECT where we specialize in buying vintage cards, autographs, and collections.  If you have any of THESE cards, give us a shout; we'd be interested in buying!  If you have a game-used hat that Babe Ruth wore, we realllllllly want to hear that story.

Recently we told you about awesome, hidden autographs inside the Hall of Fame.  There are actually autographs behind the players' plaques!  That story is right here. Just when we thought there couldn't be a more unique story to come out of the Hall, I learned about the Custom Experience Tour where YOU can hold rare items from inside the museum!

For Christmas, I wanted to get my wife a special gift involving Yankees.  With the pandemic, few things in NY are actually open; restaurants don't even offer indoor seating.  I wouldn't be able to bring the Mrs. to a Yankee game, there are no meet and greets available, and I don't have Jeets on speed dial.  In steps the Baseball Hall of Fame Custom Tour Experience.  What's involved? Glad you asked.

The artifact spotlight is really what got me to buy the gift for my wife!  The Mrs. could actually HOLD Yankee items from the Hall!

The tour itself lasted about 1.5 hours.  The Hall has three floors.  We started on the second floor and followed the timeline of the game going back to the very start of the New York Yankees. Bats from Babe Ruth, Lou Gehrig's actual locker, Joe DiMaggio rings, and so much more was displayed. 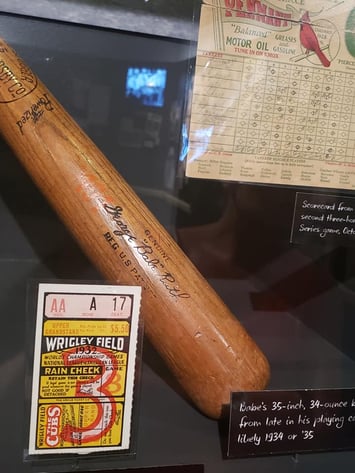 The third floor has a display filled with Hank Aaron's locker, jerseys, awards, and then over to a case of every team's world series rings.  The second floor had some of the most valuable baseball cards EVER including the T-206 Honus Wagner, a Ruth rookie, and even the new kid on the block - a signed Mike Trout rookie. If you're wondering what these valuable cards look like, check them out here. 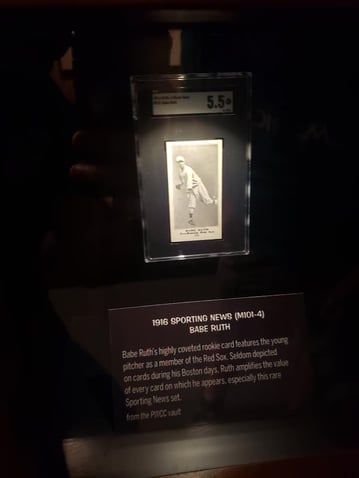 After drooling over priceless items, we moved down to the first floor where the plaques reside.  A cool fact we learned was that Yogi Berra posed sideways on his plaque because he felt disrespected by the Yankees.  After Hall of Fame career as a player, Berra managed the Yankees in 1964 coming up just short and losing the 7th game of the World Series.  After the Series, the Yankees fired Berra and hired the manager of the team that beat him in the Series to become the next Yankees' skipper.  For this, when Berra had his plaque made for the HOF, "turned his nose at the Yankees." 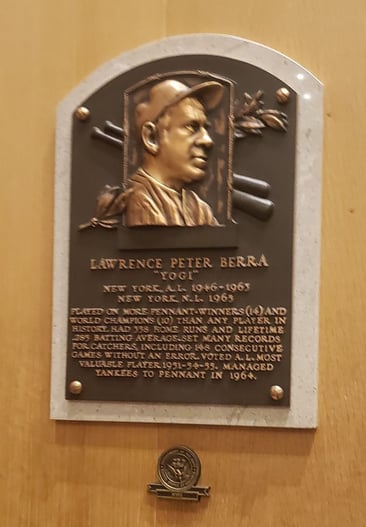 After we saw the Hall of Plaques, it was TIME!  The tour guide brought my wife and I into the Learning Center, with a table full real, actual items from the Hall. 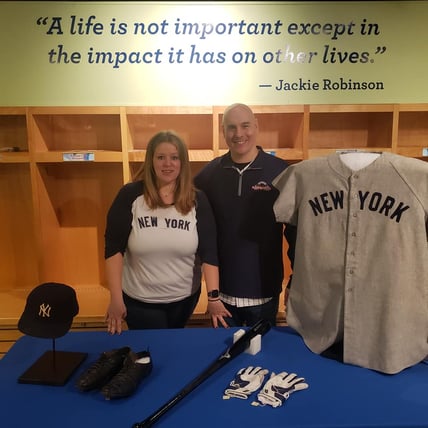 The HOF provided white gloves for us to wear, and allowed Darcy to seriously WEAR Derek Jeter's batting gloves from the game he became the Yankees all-time hits leader - for real.  We were able to try on the batting gloves and hold the following:

After we put Jeter's gloves on, and held the other items, our tour guide, Chuck, also pulled out bats that Aaron Judge, Mike Trout, and Giancarlo Stanton all used in batting practice.  Without needing to wear the white gloves, we were able to pick up the bats, hold and pose with each! My favorite story is when my wife got to pick up Lou Gehrig's jersey, move it over to the wall and pose for a photo.  Just picked up a 1939 Gehrig jersey herself and posed with it ...incredible.  That photo is in our personal collection but I'll share a few photos of this AWESOME experience!  First, you're wondering WHERE and HOW MUCH, aren't you?

I suggest you do this tour like you have a Kit Kat.  Grab 3 friends, split the bill, and ball out!  Ask for my guy Chuck (Charles McMann) for the tour! Chuck is very friendly and knows his baseball! 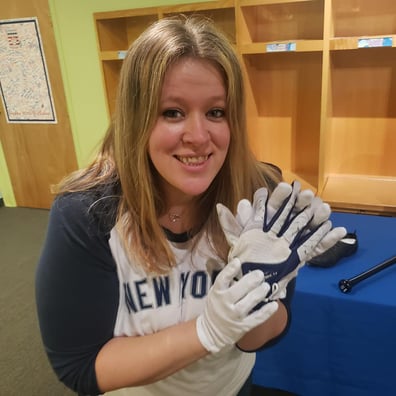 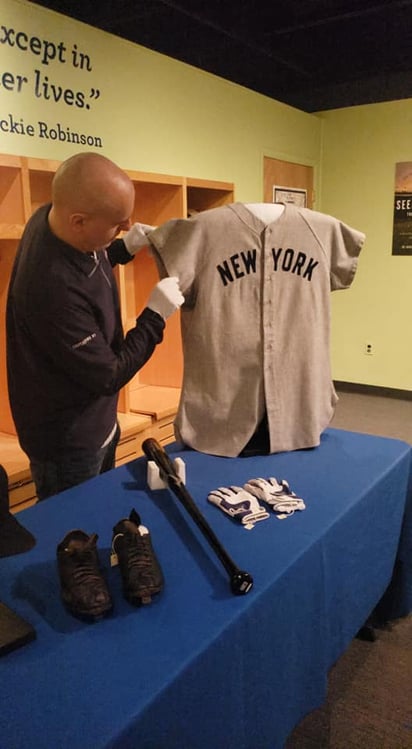 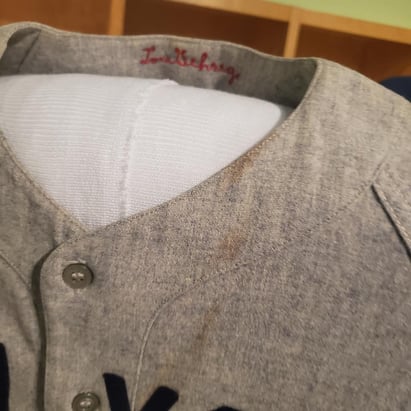 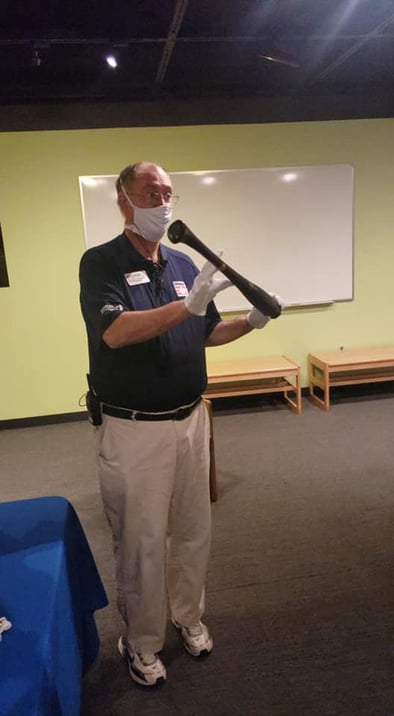