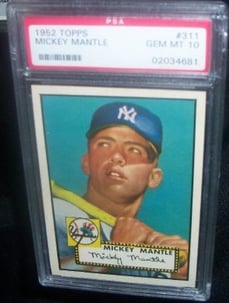 A Mickey Mantle rookie card is now the record holder for the highest-selling price for a sports card; Mick's rookie hauled in an impressive 5.2 million dollars!  While this 1952 Topps rookie owns the record, there is another Mickey Mantle that could even CRUSH this new value.

Move over, Mike Trout - you've got company.  Just a few months ago we told you about a Trout rookie that broke the record for most expensive sports card at 3.93 million dollars right here.  Less than five months later, the future HOF lost the record to an all-time great ICONIC card with a 1952 Topps Mickey Mantle for 5.2 mil!  Just think - this card isn't even the best of the rookies either...

This blog is sponsored by JUST COLLECT where we specialize in buying vintage cards, autographs, and collections. If you have any of THESE cards, we'd love to chat!  We're always interested in Trout rookies or Mantle cards!

The '52 Topps Mantle is a "holy grail" of cards for collectors. Mantle cards are highly sought after on a normal basis but the this beauty has a crazy backstory.  At card number 311, Mantle's rookie was placed in the second series of the Topps releases.  By the time the second series was released, kids forgot about baseball cards and focused their attention on the football cards that just came out.  Cases of 1952 Topps Series 2 simply sat in a warehouse until they were DUMPED IN THE OCEAN.

Mantle went on to have an illustrious career but his rookie cards never flew off shelves and are super scarce today.  If only those cases were put into containers that wouldn't rot in the water; I'd be out there with a SCUBA mask before you finish reading this story.

We mentioned that the 1952 Mantle that sold for 5.2 million dollars was graded a PSA 9 out of 10.  If you're not familiar with grading, we list out all the info here.  There are six '52 Mantles graded PSA 9, but there are THREE PSA 10 cards known to exist!

The three owners of the PSA 10 Mantle cards haven't sold their treasures, so the record is being set by the PSA 9 cards that owners are willing to part with.

I've personally seen Ken Kendrick's PSA 10 Mantle during a special viewing at the baseball Hall of Fame.  Here is the photo: 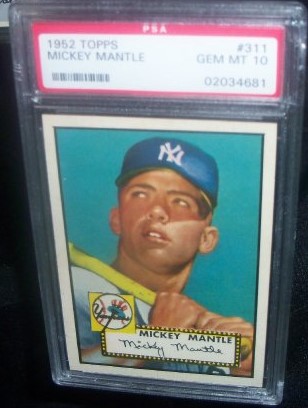 The Hall of Fame has the coolest pieces of memorabilia! Did you know you can actually hold some of the items at the HOF?  Check out how you can do that here. Maybe you can hold one of the Mick's jerseys!

If a PSA 9 1952 Topps Mickey Mantle brings in 5.2 million bucks, how much would a PSA 10 bring in?  There is a chance the three current owners decide never to sell their cards, so we may never truly know!

Wonder if the Mystery Owner doesn't want to reveal where the card came from because they did actually go SCUBA diving for it...

If you have any Mickey Mantle cards you'd love to sell or even want to tell us a cool story about the Mick, you have our ear!